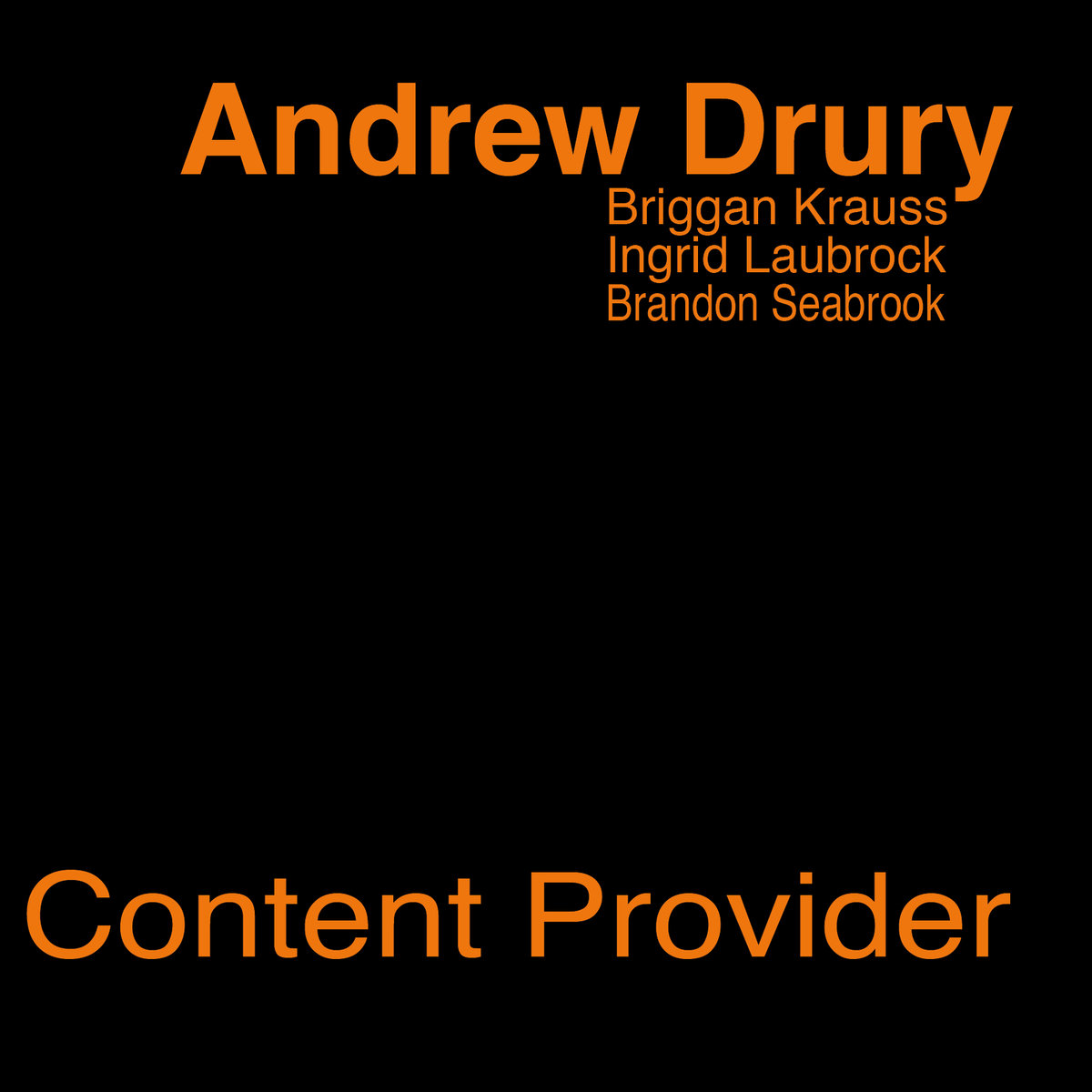 Andrew Drury brings the content, all of it, on Content Provider, a set of six densely constructed instrumental compositions (and an arrangement of Clifford Brown’s Daahoud) released in 2015 on his own Soup and Sound Recordings label. This is an album of in-your-face material: the content is up front, insistent, angular. Ideas are presented rapid fire, growing out of each other and brought quickly in and out of focus. So much material! In some moments, a bold compositional texture lasts only a few bars before Drury’s quartet shifts it into an equally bold, seemingly unrelated texture. This is not to suggest development doesn’t occur; it does, rapidly at times, but to my ears development is a secondary concern. Foremost is the presentation of textures and gestures, sometimes related, sometimes not. At its most compelling, listening to this music feels like reeling down a city avenue, where each cross street offers up new sensory information. Same city, same path, but constantly new inputs at each intersection. There are moments, too, where this compositional approach brought me close to aural exhaustion – where am I going? What was around that corner? And then it’s gone.

Idiomatically, this is an almost classic statement of Downtown NYC avant-jazz. I can’t point to another record this sounds like, but it certainly emerges from a community of music-making and compositional decision-making over the last thirty years or so. The cuts between odd-time straight-eighth riffs and buoyant swing, the juxtaposition of whorls of distorted guitar and saxophone wails, the particular approach to volume and density (and even something about the sound engineering); all these aspects suggest to this listener that the avenue I am reeling down as I listen is in New York (and not, say, Philadelphia or Chicago or Detroit).

With a few exceptions, the improvised sections tend to be taut, energetic, and presented as texture blocks rather than thematic development. Drury – a brilliantly resourceful and expressive improvising drummer – works here with three other gifted and accomplished New York-based musicians whose technique shines: Briggan Krauss on alto saxophone, Ingrid Laubrock on tenor, and Brandon Seabrook on guitar. The sonic palette on the album is distinct. Like the compositional material itself, it rarely simmers, but rather demands attention with each new gesture. With content as the main concern, there is not a lot of emphasis on context, that is, on background/foreground, although in one notable exception, on The Commune of Brooklyn, knotty contrapuntal lines emerge invisibly from a brash improvisational intro. They quickly give way to a succession of different textures, and the counterpoint never returns as such, but the moment reveals the deeper gifts of the composer: for a few bars, here is what this set of pieces is not.

The design for the CD packaging is spare, with song titles and credits indicated in what appears to be Helvetica font, in orange, on a black background with no other images. On the first few listens I wondered if it was only the instrumentation and the content-forward approach that drew Drury’s six compositions together. (The charmingly noirish down-tempo rendering of Clifford Brown’s early 50’s bop tune Daahoud is an exception here, and could be read as an ironic inclusion.) Because I am not an adherent of the well-worn demand that “the music speak for itself,” I did initially miss some context. I really connected with the music only once I had given it my own: by repeat listening, it became a personal soundtrack, an accompaniment to my thoughts and feelings while I kept it in rotation. It made my mind race, it challenged me to keep up. Like the city that it comes from.