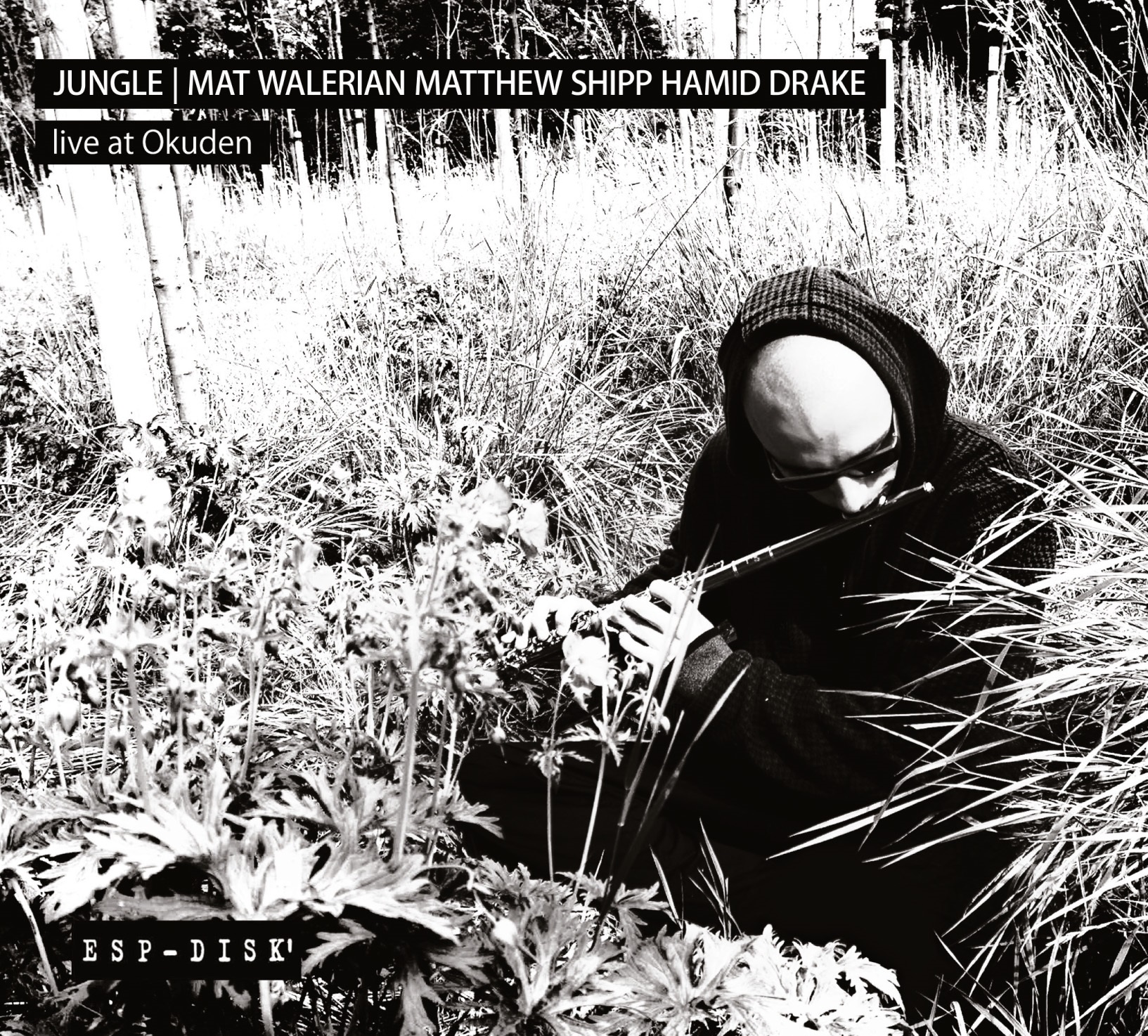 “Repetition is never in the stars. It is about becoming a part of creation rather than trying to be creative. Improvisational music is a day-to-day, second-by-second experience that reboots itself at each silence. The music speaks for itself.” — William Parker

Live at Okuden is a double album by Jungle, an allstar trio consisting of drummer/percussionist Hamid Drake, saxophonist Mat Walerian and pianist Matthew Shipp. The album was recorded live at the Okuden music festival in the Fall of 2012 and recently released on the legendary ESP Disk’ label. The music on this double disc is infused with a deeply spiritual and meditative air. The dramatic and intuitive performances alternate between fury and quiet intensity. The set opens with “Shrine”, a subtle, dreamy piece that is centered around Shipp’s delicate and sparsely timed chords and melodic fragments, minimal percussion and Walerian’s sharp and fluid flute. “Shrine” greets the audience at Okuden with a soft and tentatively melodic character, reminiscent of traditional Japanese devotional music. The track “Gentle Giants” provides the first glimpse into the band’s peak volume and aggression. Building up from a romping, distorted Blues theme initiated by Shipp and Drake, the piece increases in intensity, with the trio rolling over into an avalanche of wailing fury and purifying fire. Slipped in between the walls of ferocity led by Shipp and Drake, Walerian slides in to lead the piece’s softer sections with his bright, dexterous alto sax lines. The fact that each member of the trio is a composer and bandleader in their own right does not hamper their egoless approach to collective improvisation. Each player expresses a unique, individual voice while allowing space for their compatriots to react and play.

Throughout Live at Okuden, the Jungle trio is heavy with a sense of tension and spiritual drama. Walerian’s screaming and looping alto sax and Shipp’s harmonically dense and cluttered piano calling to mind the music found in 60’s and early 70’s work of altoist/composer Pharoah Sanders’ (Jungle sound is specifically reminiscent of Sanders albums Tauhid, Jewels of Thought
and Black Unity). With Walerian and Shipp’s assured and colorful playing it would be easy to ignore Hamid Drake’s powerful percussion work and drumming anchoring these performances throughout. Drake asserts himself with the extended drum solo he takes in the middle of “Ultimate Insurance”.
Deftly working his kit’s hi-hats, cymbals and toms. Drake’s imaginative solo builds into a climax of force and rhythmic focus.

With stand out tracks such as “Perfect Joint”, and the Monkish “Tiger” the Trio paces through a full hour and 40 minutes of fiery yet thoughtful spirit music. The diversity and flexibility of the performances throughout this album are the result of the group’s skillful ability to work improvisation as instant composition. Calm and meditative one moment, ecstatic and free the next, Live at Okuden is a strong and impressive offering from three experienced veterans.