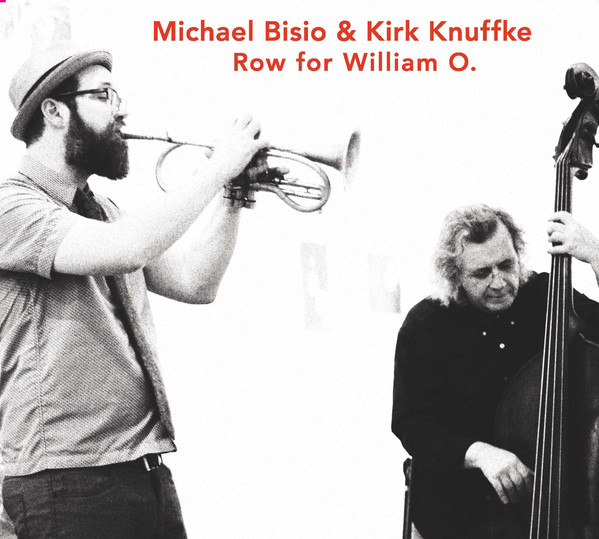 To fully appreciate the latest CD by bassist Michael Bisio and cornet player Kirk Knuffke, “Row For William O,” picture yourself in the backseat of a car, on a joyride with two friends in the front taking turns behind the wheel, bound for destinations unknown.  Indeed, as Bisio says, “It’s about the journey, not the destination.”

This journey began with a suggestion from one of the partners at Relative Pitch Records that Bisio and Knuffke record a CD of folk music.  Upon hearing this, Bisio instantly thought of his mentor and composition teacher at the University of Washington, 90-year-old William (Bill) Overton Smith, who released a record in 1961 called “Folk Jazz.” Bisio explained, “It made me think, people are always doing tribute records to people after they’ve passed on.  So I said, this is somebody I’d like to do a tribute to while he’s still alive and well.”  Bisio further explained that the title, “Row For William O,” refers to a twelve tone row, a technique used in composing that Smith taught Bisio when he studied with Smith in the 1970s.

Four decades later, the choice to partner with Knuffke was really quite simple.  It came down to a relationship that Bisio claims was meant to be. “I met Kirk about four or five years ago, and when we first talked and heard each other play, it was like instant simpatico.  Kirk is such a consummate artist, and our rapport is so clean and natural, that everything on this project just fell together the way it’s supposed to.”

Appropriately, the CD opens with a composition by the honoree, entitled “Drago.” Bisio and Knuffke begin the piece playing a stop and go theme in unison, before Knuffke takes flight with a solo. Bisio often pushes the tempo with his walking bass, while occasionally backing up Knuffke’s cornet with improvised lines of his own. They soon return to the theme, playing as two, with a synergy that makes them sound as one.  Keep listening.  This is something you will hear throughout the CD.

The title track provokes an image of two friends having a conversation … sometimes playful, sometimes serious, but always sincere. Bisio switches to the bow, providing a platform for Knuffke’s middle and upper register improvisations. Knuffke then returns the favor, stepping out while Bisio moves front and center for a heartfelt solo, and a moving tribute to his friend and mentor.

If you own or have heard Bisio’s last effort for Relative Pitch, “Accortet,” you may recognize the next tune, “I Want to Do For You What Spring Does to Cherry Trees.”  On “Row For William O,” the song is given a new, and more introspective treatment, without the drums of Michael Wimberly and Art Bailey’s accordion.

Bisio and Knuffke propel each other to new heights on “Ohsee O.C.,” a composition dedicated to the late saxophonist, Ornette Coleman.  It’s another conversation between two friends, and a fitting inclusion on this disc because Knuffke and Coleman were also friends, with Kirk having a standing invitation to visit the legend at his New York apartment, which for several years, he did at least once a month.  One highlight here is a Bisio solo, which includes a subtle quote from one of Ornette’s famous compositions, “Lonely Woman.”

Frequently, improvising jazz musicians use the term, “spontaneous composition” to describe their chosen form of art.  A perfect example is “December,” which Bisio and Knuffke created in the studio while recording this CD in late December 2015. Hearing the dramatic notes and melodies come forth from Knuffke’s cornet and Bisio’s bass, you would honestly never know you were listening to five minutes of pure improvisation.

Finally, Biso’s composition, “To Birds,” starts with a Knuffke solo, before he and Bisio begin a call and response theme that seamlessly morphs into an arco solo by Bisio.  Together, they sound like two members of a modern day chamber ensemble.

Overall, if there’s anything to criticize, it’s that at 37 minutes of this excellent music, the CD can leave you thirsting for encores.  To that end, “Row For William O” gives fans of Michael Bisio and Kirk Knuffke something to look forward to when these two close friends go into the studio to begin their next collaboration, joyride, and journey.