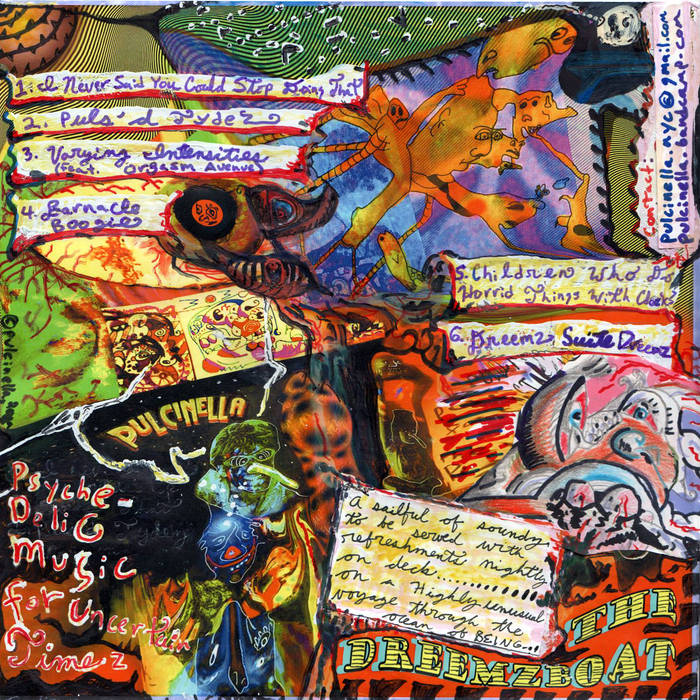 Pulcinella is an electronic music band founded by Colin Sanderson. I met Colin while I was exploring the world of the underground noise rock scene, especially during my years of working with Weasel Walter’s Cellular Chaos. I would cross paths with Colin when he was participating with Manburger Surgical. That group consisted of Colin Sanderson on electric guitar, Paul Feitzinger (Clambo), on drums, and Mike Battaglia, on electric bass. Both Colin and Paul started this band back in 2007. I would see them here and there when I was working with Lawry Zilmrah’s group, Zilmrah. Sometimes, my band, Slipstream Time Travel, would play opposite Colin’s group at Goodbye Blue Monday, a Brooklyn club that has since closed.

Their website describes them as follows: “Uncanny feats of ventriloquial dexterity, circuit bent noise manipulation wizardry, psychedelic clouds of sonic absurdism, improvisational music and performance hijinx– all can be found in the music/performance collective known as MANBURGER SURGICAL.”

Young artists today are going about making music in their own way. They’re often not thinking in terms of record labels because of the decline of the industry. According to Colin, here’s his take on this project, “We are not on a label! This is a DIY recording, as has been everything I’ve ever released; composed, recorded, and packaged by me.” Interested listeners can find this music at the following link:

Pulcinella relies heavily on electronic music, utilizing varying degrees of vibrating pulsing electronic: squeals, ambient, new age chords of varying tonalities, and other worldly soundscapes. The musicians wear colorful costumes reminiscent of Sun Ra and his Arkestra. What you hear on this CD is very typical of what you are likely to hear when you see them live.

This music needs to be taken in as a whole rather than the individual tracks that are listed on the CD. I find that with electronic music, the entirety of the album is greater than the sum of its total. The musicians move through a variety of grooves, vamps, and repeated sections within each song. I found myself listening to the overall presentation, instead of focusing on the individual songs. Pulcinella embodies the term psychedelic music, a term I heard so often during the sixties. I cannot say I have heard a band in this era that uses this sound so fully and completely as Pulcinella. Their sound is rather eclectic, with traces of the free jazz, rock, metal, and a basic foundation of electronic sounds. The sounds are typical or sometimes atypical of electronic music from the fifties and some of the more modern popular sounds that you are likely to hear from young people operating within this genre today.

On any given track, listeners may hear dry, staccato pulsating, airy, and outer space sounds as well. It’s an amalgam of multi-dimensional sounds and tones assaulting the senses in a way that will not offend listeners. The vocals tend to blend in the cosmic soup of the electronic musical backdrop throughout most of the album. Drummer Paul Feitzinger tends to use rock beats behind the band; there are lots of improvisations from Colin on electric guitar and Andrew MacLarty on modular synth.

Currently, Colin Sanderson is a member of my band, Slipstream Time Travel. He has grown over the past few years since I invited him to join us. This recording is one of many that he has been releasing on his own. Although he is part of the underground noise rock or experimental music scene, I find that the young people of this genre have much to contribute to and speak to free jazz. There is something of a shared avant-garde vocabulary. Much of Sanderson’s music is not melody-orientated. Pulcinella is very much about being in the moment or creating on the spot, which has a direct resonance to what is happening in free jazz.  Other times, Pulcinella improvises using noise as a foundation, a method that has become an essential characteristic of underground music!

Take track five for example, “Children Who Do Horrid Things With Clocks.” The opening sounds are similar to what I do when I use a twirling tube and bells at my live performances. The chords played on modular synth, create an almost church-like feeling. The piece moves on from here into other areas. Andrew begins playing simple melodic riffs while Paul is engaging in free jazz drumming. There is a fair amount of interplay between all the musicians. Most of the above mentioned interplay is happening simultaneously. For fans of free jazz and experimental music, The Dreemzboat! is highly recommended. For more information, please visit:

Listen to the music and check out the live shows to discover the wonders of Pulcinella!