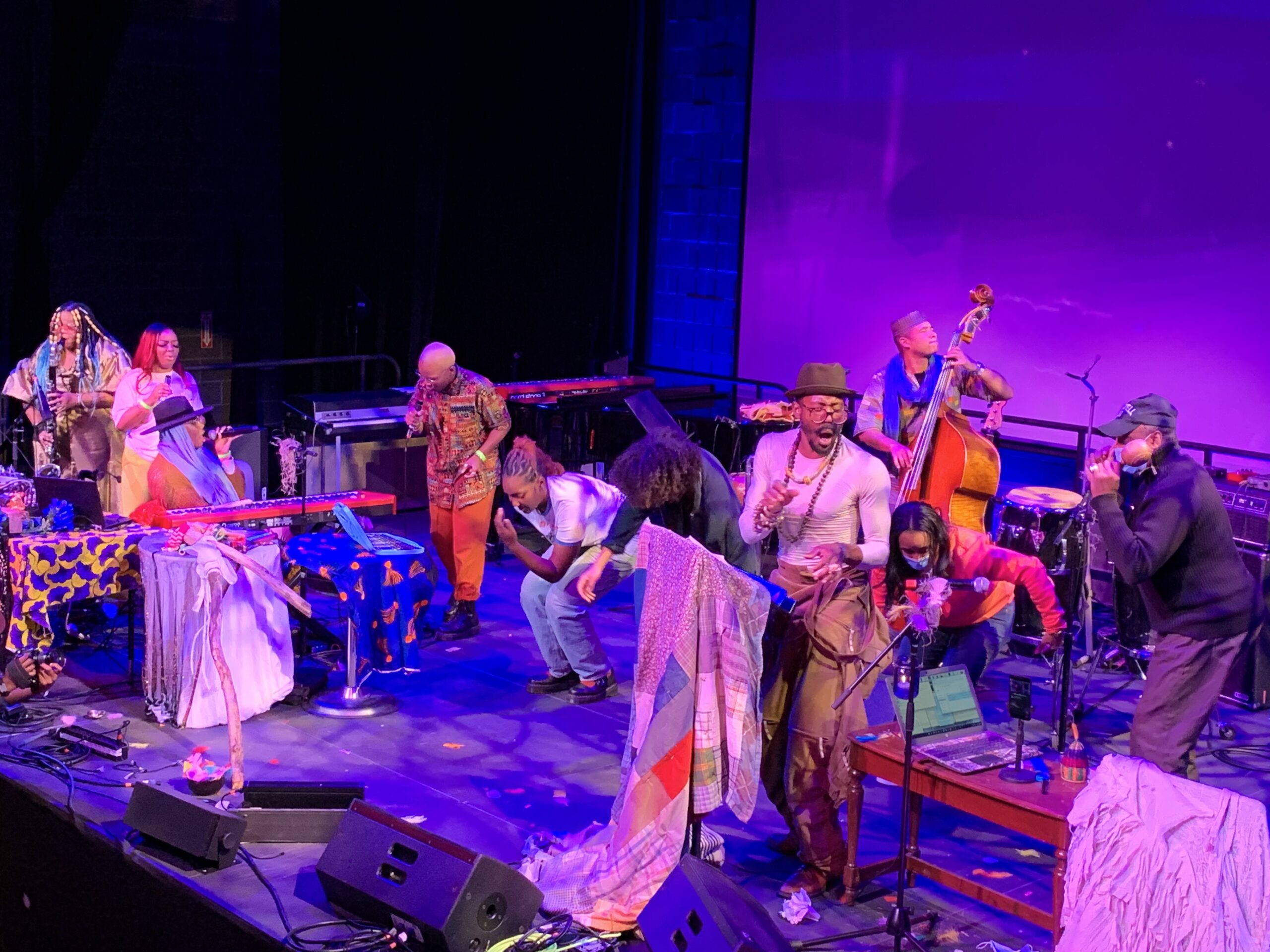 After time spent visiting the estate of Harriet Tubman in Auburn, New York, Viktor Le Givens and Angel Bat Dawid presented a new work, Suite Harriet, on the main stage of BRIC Jazzfest in Brooklyn on the 21st of October. Le Givens’ work seeks to deepen and broaden our contact with the “etheric realm” through installation, performance and ritual. Chicago based clarinetist, composer and DJ  Angel Bat Dawid’s work and practice fuses Black music and improvisation. Together they called forth Tubman’s spirit on stage and created a space for collective improvisation, healing, and joy.

The setup sprawled across the whole stage and was rich with varied instrumentation. On Dawid’s side she had maracas, a child’s xylophone, gourd rattles, sleigh bells which covered the table near her keyboard, and multiple reed instruments. On the other side of the stage Le Givens’ area featured a microphone draped in a family quilt and artifacts including candles, feathers, incense and a heavy white garment adorning the table. They were accompanied by Adam Zanolini, another Chicago based multi-instrumentalist and current member of the AACM who on this occasion played upright bass, bass flute, and djembe among other instruments. A trumpeter also performed. With sleighbells wrapped around his wrist Le Givens cleansed each corner of the stage with a shekere, and Angel announced the start with clanging xylophone peals and from there unleashed a performance that was part ancestor worship, collective free improvisation, mediation, and group cleansing ritual.

“Jazz is NOT a commodity you can consume on Amazon!” shouted Le Givens as Dawid, and Zanolini carried on an improvised backdrop. Leading the entire room in a group meditative exercise he instructed audience members to raise hands above their heads and breathe deeply from the sacrum to release tension and internalized unfreedom. “Move your spine!” Le Givens enjoined as the music continued to build. Invoking a central message from author Toni Cade Bambara’s The Salt Eaters, Le Givens told the crowd, “You know, most folks are afraid to be free.” Don’t be afraid to be free, he said as he moved, lithe and deliberate. As if to say, Tubman did not work as hard as she did for us all to feel so stiff, and afraid to express ourselves. 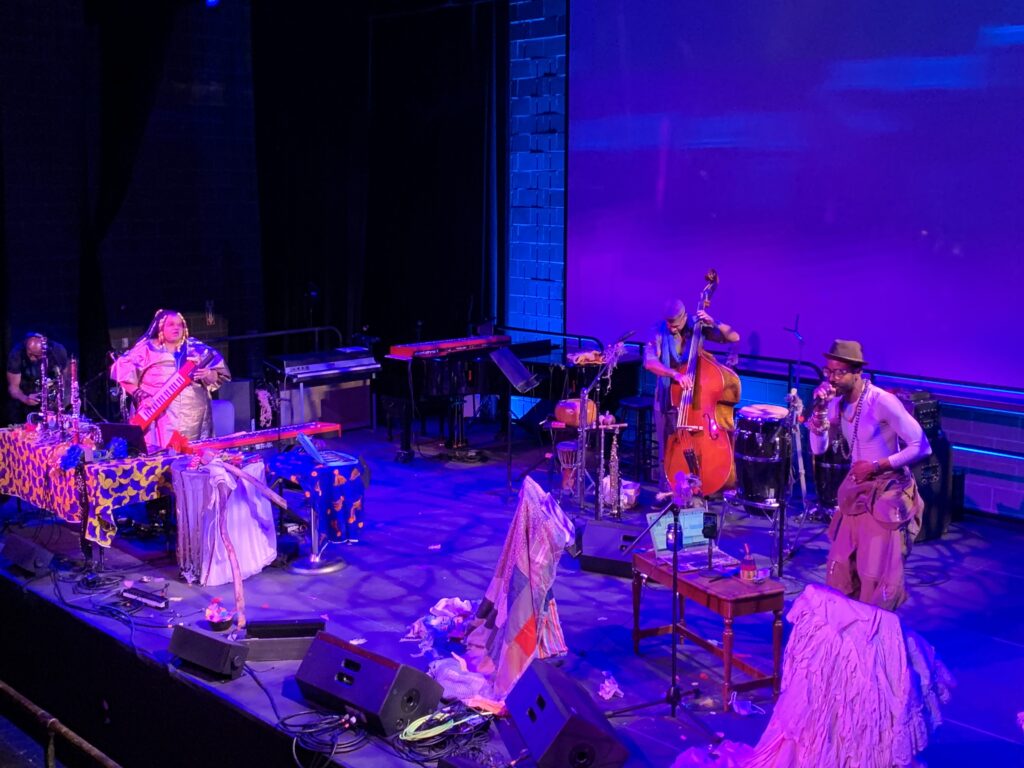 The name of the piece itself Suite Harriet plays on a recurring theme in Le Givens’ work, an emphasis on the sweetness of Black folk in the face of and alongside harrowing realities. Born in Houston, Texas, and drawing on themes from his upbringing in the South Le Givens asks, “What is it about Blackness and being ‘the African’ that makes us so damn sweet?” This piece drew out multiple references to his earlier works including the autobiographical photo and video piece “Mo’lasses” in which Le Givens traces ancestral lines, culture, and spirituality through a deeply personal anthropological excavation of his family’s land and the physical artifacts he encountered there.

The BRIC performance likewise included extensive unearthing of history as Tubman’s work and dedication was invoked through Le Givens’ repeated chanting “Water. Water to Train. Train. Train to Sky!” as if to underscore the skyward vision and persistence required for Tubman’s dangerous and liberatory enterprise of ushering enslaved people to freedom. No inch was wasted on the stage as Le Givens called up performers from the audience to join the improvisation. Three singers, five or more dancers, a drummer, and another person who took to the maracas were culled from the audience. The piece moved from invocation to lamentation as Dawid transitioned from musician to mourner, and mourner back to celebrant. Dawid spent some time on the floor of the stage, moving in response to the strident calls of Le Givens. The mood did not linger too long in lamentation, but became exaltant as the chants from the audience cum performers rose with the drumming and flourishes from Zanolini and the unnamed trumpeter. This performance seemed to elude any genre or style, infusing poetry, free jazz, audience participation, improvisation, and an array of little instruments reminiscent of what one might have seen on stage with Roscoe Mitchell and Malachi Favors at ab Art Ensemble of Chicago performance.

“Most folks are afraid to be free,” Le Givens repeated to the crowd in one of his poetic jags. Perhaps it could be read as an admonition or a warning, but in the room that evening it landed as an assurance. With his meticulously chosen and emphatically delivered words Le Givens reminded the crowd that Tubman had lived to provide routes to freedom for her people and that we inherit an extension of that mission. Despite the much rehearsed and reinforced resistance to collectivity in public space, the message that Dawid and Viktor brought from Harriet Tubman’s house was that healing can come from a connection to ones past and a connection to those around us. Their performance proved that a stage is no barrier to these kinds of connections, rather it can actually facilitate them.