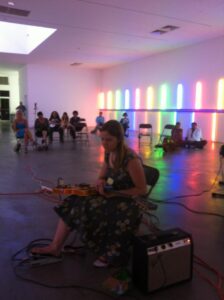 Sandy Ewen is a sound artist, visual artist and architect who has recently relocated to NYC from Houston, TX.  Ewen’s audio practice focuses on extended guitar techniques, improvisation, graphic scores and interdisciplinary collaboration. Her unique approach to guitar incorporates a wide array of implements – railroad spikes, sidewalk chalk, threaded bolts, steel wool and other items become an arsenal of abstraction. Ewen has worked extensively with film makers, dancers, poets and musicians to create films, audio recording, sound interventions and performance art. Ewen’s musical collaborations include trio Etched in the Eye, duo with Tom Carter called Spiderwebs, the trio Garden medium, and ongoing collaborations with percussionist Weasel Walter and bassist Damon Smith. For nearly ten years, Ewen has been the leader of an all-female large ensemble. The ensemble conceptualizes and performs sound and performance art, utilizing graphic and text based scores and improvisational constraints. The ensemble performed with an amplified bathtub at Diverse Works in 2016, and performed a suite of installation-specific compositions for  Francis Alÿs’ Fabiola Project at the Menil. Sandy has spent much of 2017 touring, performing solo sets and in collaboration with Steve Jansen (tapes and electronics) and Maria Chavez (turntables) around Europe.  In years past, Ewen has performed alongside Roscoe Mitchell, Keith Rowe, Lydia Lunch and many others, and has performed and recorded with Jaap Blonk, Henry Kaiser and more. In 2014 she performed at San Francisco’s 13th Annual Outsound New Music Summit, and she has made several appearances at Austin’s annual No Idea Festival.

Born in Toronto, Canada in 1985, Sandy Ewen received a Bachelor of Architecture from the University of Texas at Austin in 2008. Since then she has resided in Houston, TX where she pursues musical and visual projects and her architecture license. Ewen has released several albums, including a duo with guitarist Tom Carter, a trio with bassist Damon Smith & drummer Weasel Walter, and a rock album with Austin’s Weird Weeds. Ewen’s visual work is closely tied to her work in sound; she uses both mediums to explore texture, composition and materials.

Ewen’s microcollages, enlarged through projection and digital printing, are an exploration of material and technique. Using a unique process pioneered by the artist, natural materials and polymers are torn, liquefied, scorched, melted, cut, and fused. When enlarged, the microscopic nuances of these manipulations are manifested in exquisite detail. Ewen has presented prints of her work at 14 Pews (2012), Spacetaker/Fresh Arts (2012), Khon’s (2013) & Galeria Regina (2014).

As an improviser in both art and music, Ewen sees herself as guiding materials and space rather than executing a preconceived composition. “I like to explore mediums and materials and tease out their essence,” says Ewen. “Working with slide projections has focused my eye on the subtitles of natural processes of decay and transformation. Through my work, I am asking questions of the materials rather than dictating answers.”