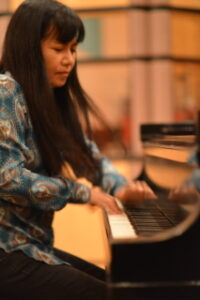 Born on October 9, 1958 in Tokyo, Japan, Fujii began playing piano at four and received classical training until twenty, when she turned to jazz. From 1985 to 1987, she studied at Boston’s Berklee College of Music, where her teachers included Herb Pomeroy and Bill Pierce. She returned to Japan for six years before going back to the US to study at the New England Conservatory in Boston, where her teachers included George Russell, Cecil McBee, and Paul Bley, who appeared on her debut CD Something About Water (Libra, 1996).

Since then Fujii has been an innovative bandleader and soloist, a tireless seeker of new sounds, and a prolific recording artist in ensembles ranging from duos to big bands. She has showcased her astonishing range and ability on nearly 100 CDs as leader or co-leader. With each recording or new band, she explores new aspects of her art.

Between 1997 and 2009, her New York trio with bassist Mark Dresser and drummer Jim Black released seven critically acclaimed CDs. Cadence magazine described the group as “Beautiful and exciting by turns, and sometimes both at once.” Jason Bivins in Signal to Noise praised the “dynamite unit” for its “improv delirium, hot grooves, and melodic dances.” In 2004 Fujii’s husband, trumpeter Natsuki Tamura, joined the trio to form the Satoko Fujii Four, which released the critically acclaimed Live in Japan 2004 and 2006’s When We Were There.

Even four orchestras are not enough for the prolific composer-improviser. At the 2013 Chicago Jazz Festival she premiered a fifth big band, the Satoko Fujii Orchestra Chicago. In 2014, she added Orchestra Berlin to her growing list of large ensembles, and has released two CDs with the band. Derk Richardson in The Absolute Sound wrote that their debut album,IchigoIchie, “swells in oceanic crests from which its musicians soar wildly. The four-part title suite repeatedly builds to thrilling, noisy, near-hysterical climaxes.”

Making their recorded debut in 2011, the international quartet Kaze, features Fujii and Tamura along with trumpeter Christian Pruvost, and drummer Peter Orins from France. Kaze has earned wide acclaim. As Virginia Schaefer said of a live show she covered for JazzTimes, “Intense and playful, down-to-earth and international, Kaze communicates in a musical language of contrasts and continuity.”  Jon Garelick writes in Giant Steps, “Kaze takes jazz abstraction to a sublime limit…. There is suspense, virtuosity, mystery, calm.”  Their debut recording Rafale (2011) earned acclaim from Mark Medwin in The New York City Jazz Record, as “a stunning achievement from note one…” Derek Stone wrote in The Free Jazz Collective that their most recent album, Atody Man (Libra Records, 2018), “Kaze have played to their strengths— the exquisitely dramatic melodicism, the bombast, the fearless experimentation. As a result, they’ve turned out one of the finest and most diverse albums of their eight-year tenure.”In addition, Kaze appears as special guests with Orchestra Tokyo on their 2016 release, Peace. In 2016 Kaze expanded to include a second pianist, Sophie Agnel, and a second drummer, Didier Lasserre, to become Trouble Kaze, which released an album in early 2017.

Fujii tours as relentlessly as she records. She has appeared live on every continent except Antarctica, performing at festivals, concert halls, and clubs. In 2013, she was honored with three nights on which to present her music at the Bielefeld Festival in Germany. In August and September of that year, she presented a week of music by several of her bands at The Stone in New York City.

The year 2016 marked Fujii’s 20th anniversary in music as well the 20th anniversary of Libra Records, which has released most of her recordings. To celebrate, she embarked on a worldwide tour that included completely improvised solo concerts once a month in Europe, the US, and Japan; concerts in which she and Tamura were joined by special guests; and performances by several of her small and large ensembles, past and present.

During her 60th birthday year in 2018, a milestone known as Kanreki in Japan, Fujii celebrated by releasing one new CD a month. In keeping the tradition of reflecting on the past while looking forward to the future, the 12 albums included releases by groups that Fujii has led or been part of for years, such as Kaze, Orchestra Berlin and Orchestra Tokyo, as well as new groups and collaborations.

Fujii tirelessly continues to explore the possibilities and expand the parameters of the many groups she’s established over the years, and there is certainly more provocative and exciting listening in store as she pursues her ultimate goal: “I would love to make music that no one has heard before.”