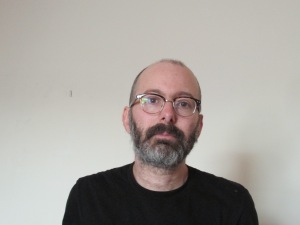 Percussionist and improviser David Grollman is from New York City.  He is an active part of the vast underground of musicians living, playing and recording in NYC. He has played the annual Sonic Circuits Festival with his groups Prehistoric Horse, Ghosts of the Holy Ghost Spermic Brotherhood and BDM. He performed at the Boise Experimental Music Festival and the Experimental Festival in Brooklyn.  He has performed with musicians from all over the globe including Alessandra Eramo, Jaap Blonk, Frantz Loriot, Darius Jones, Laurie Amat, Emilie Lesbros, Judy Dunaway, Jack Wright, Pascal Niggenkemper, Andy Haas, Michael Evans, Jill Burton, Ryan Krause, Lucio Menegon and  Brad Henkel . He is part of many active duos and trios including Swirm with Brad Henkel, Hag with Brad Henkel and Sean Ali, Fester with Sean Ali, Lipchitz with Ryan Krause, Ghosts of the Holy Ghost Spermic Brotherhood with Andy Haas and Michael Evans, Blister with Lucio Menegon, and Dybbuk with Nathaniel Morgan.

David is a member of the Prom Night Music collective and record label. The label has over twenty releases out and continues to document improvised music made in New York City and beyond.

David bows, scrapes, blows, slaps, rubs, caresses, abuses and generally tests the limits of his instrument. Anything is game. Anything may be a participant if the musical conversation calls for it. Artist, instrument, audience, and environment become ambiguous terms, conspiring in a theatrical exploration of chance dynamics and serendipitous exchanges.