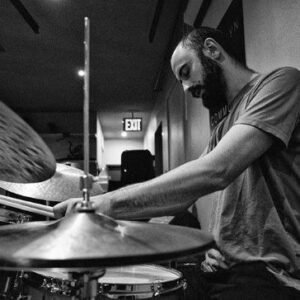 Dan Kurfirst is an NYC based percussionist, composer and improviser. Born and raised in Brooklyn, NY, his music is a product of his good fortune to have been brought up amongst people of all different cultures and master practitioners of varying musical styles.

He has performed extensively in the New York City world music and improvised music scenes for years and has performed with various groups throughout Europe, India and the Middle East. Venues performed at include The John F Kennedy Center for the Performing Arts, The Stone, OkeeChobee Festival, Roulette, Alwan for the Arts, Nublu, Rabindra Sadan Cultural Center of Kolkata, Barbes and The Vision Festival.

He recently worked as Musical Director for the Childrens Museum of Manhattan’s America To Zanzibar exhibit, helping to develop a touchscreen application for the Children to explore music of the Islamic world from India to Egypt to Indonesia.