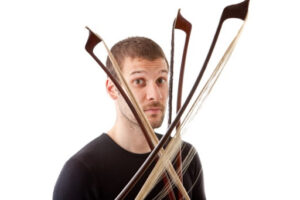 Described by the New York City Jazz Records as “one of the most adventurous bassists on the scene” and by the Chicago Reader “genius for sound exploration” Franco-German bassist and composer Pascal Niggenkemper creates music blurring the lines between improvised, pure sound, and experimental music with a distinct musical language infused with new bass techniques.

The focus of his musical work is the extension of the sound horizon of the double bass: the acoustic modification of the sound using preparations as well as motors, where he explores the interaction between man and machine (‘beat the odds’).

The cultural exchange and dialogue, the interaction with musicians from different countries is the central concern in Pascal’s projects. Living in Paris since 2016, his musical career as a child began with violin and piano before he playing the double bass as a teenager. In 1999 he moved to Cologne where he studied jazz and classical double bass at the Hochschule für Musik.

In September 2011 Pascal released with Simon Nabatov and Gerald Cleaver the CD/LP upcoming hurricane on NoBusiness Records which is listed among ‘Albums of the year’ 2011 in the ‘The New York City Jazz Record’. The trio performed in Canada and the USA.

He recorded a solo program called: ‘look with thine ears’ music for bass & preparations was premiered at the Jazzdor Festival in Strasbourg in November 2013. The CD was released in March 2015 on clean feed records. (Best of 10: Happy Ears Award) He performed for the France Musique radio broadcast by Anne Montaron called ‘a l’improviste’ and at festivals such as Bruisme Poitiers (FR), Kongsberg Jazz Festival (NO), Sound Disobedience Ljubliana (SL), Jazz em Agosto Lisbon (PT), Jazz à Luz (F) Blow Out! Oslo (NO), ON-Musik Cologne (DE) and météo Mulhouse (F) etc. In his new solo program, he works on the interaction between the human and the machine, by incorporating motors strike the strings.

In 2014 he presented the double trio ‘le 7eme continent’ with the program ‘talking trash’ at the Vive le Jazz festival in Cologne, Germany and the concert was broadcast by WDR3 radio. Their CD was released in May 2016 on clean feed records (Best of 10 Happy Ears Award) and concerts in Jazzcase Neerpelt, Jazz à Luz Festival, WinterJazz Festival in Copenhagen and Alternativa in Prague followed.

In January 2017 during a resideny at the Center National de Création Musicale Albi-Tarn in France, the project ‘beat the odds’ was created. Music for two cellos and two contrabasses whose strings are hit by a propeller. The variable speed motor is controlled by a foot pedal. A CD documenting this work will be released in 2019.

Pascal is co-leading the groups baloni with Frantz Loriot viola and Joachim Badenhorst clarinets PascAli a duo for two prepared basses with Sean Ali and Miner’s Pick with Thomas Heberer.