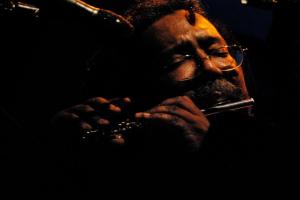 Originally from Philadelphia (b. April 16th 1951), he moved to Los Angeles and played with Horace Tapscott and his Pan-Afrikan Peoples Arkestra and other bands. He moved back to Philadelphia in the ’80’s and played with two musicians he still collaborates with today, Sunny Murray and Raymond A. King, and also with Monette Sudler, Bill Lewis and many others. He also pursued studies with Byard Lancaster.