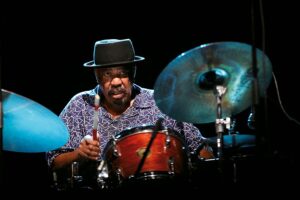 Born in Cape Town, South Africa, in 1940, Louis Moholo-Moholo has been one of the seminal figures in the international creative music scene since his emergence with the legendary Blue Notes in the early 1960s. Since this time, he has been at the heart of countless other classic line-ups, not least the Brotherhood of Breath, and his own projects such as Spirits Rejoice and Viva La Black. Alongside his profile as a bandleader, he has appeared worldwide and on record with a virtual who’s who of modern creative music, including Steve Lacy, Cecil Taylor, John Tchicai, Marilyn Crispell, Irene Schweizer, Wadada Leo Smith, Keith Tippett, Kenny Wheeler, and Evan Parker, to name only a tiny number.

In the mid-1960s, Moholo-Moholo toured South American with Steve Lacy, recording with him ‘The Forest and The Zoo’, widely thought to be the first ever fully improvised album. Returning to the UK, he joined Chris McGregor’s newly formed Brotherhood of Breath, a big band which stunned audiences around Europe with their own highly individual sound. Many other high profile groups, all featuring Louis, drew personnel from this iconic band, amongst them Mike Osborne’s Trio (with Harry Miller), Miller’s own Isipingo, Elton Dean’s Ninesense, and various groups led by Dudu Pukwana.

During the eighties Louis toured America with Peter Brötzmann’s trio, and continued to work throughout Europe leading his own groups and developing many musical partnerships, including duos with pianists Cecil Taylor in Berlin, and Irene Schweizer in Switzerland.

Another important milestone in Louis’s career was the forming in 1990’s of his nine-piece band “Viva-La-Black”, which became the first group to tour South Africa, arranged by the British Council, as the lifting of Apartheid and freedom became imminent. More recently, he has been heard in duo with Wadada Leo Smith, as well as leading his ‘Unit’’.