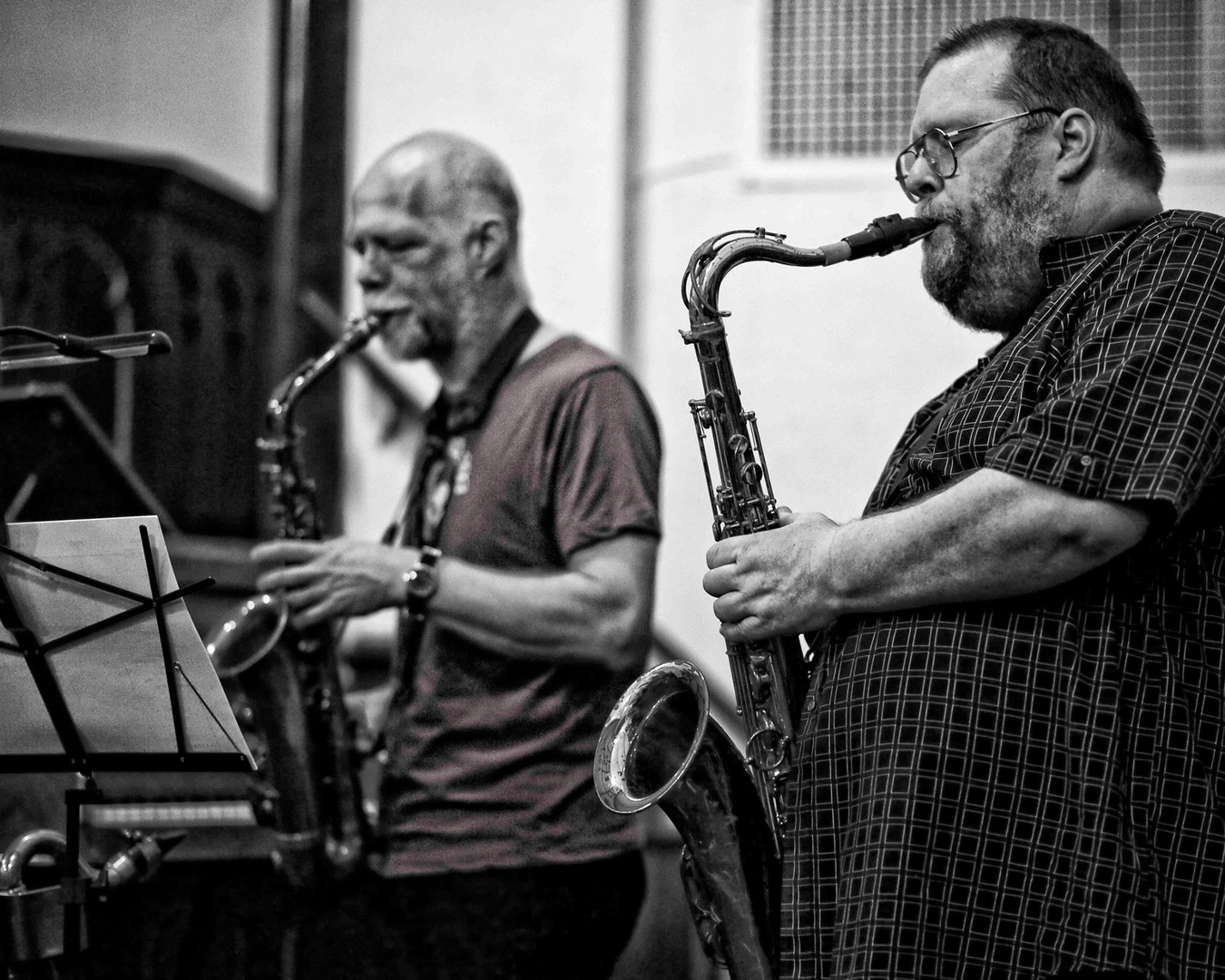 PEK (David Peck) is a multi-instrument improviser who plays all kinds of instruments including saxophones, clarinets, double reeds, percussion, electronics and auxiliary sound making devices of all kinds. PEK was born in 1964 and started playing clarinet and piano in elementary school. In 7th grade he started saxophones, first on alto, then switching to tenor in high school. He spent 10 years playing in rock bands and studying classical and jazz saxophone with Kurt Heisig in the San Jose CA area before moving to Boston in 1989 to attend Berklee where he studied performance with George Garzone. While Berklee was an excellent place to study harmony, voice training and other important aspects of a conventional formal music training course of study, it was not a very good environment for learning contemporary (or pure) improvisation (apart from his work with George). PEK did find, however, that Boston had a thriving improvisation scene, and it was here that he developed his mature pure improvisation language. During the 90s, PEK performed with many notable improvisers including Masashi Harada, Glynis Lomon, William Parker, Laurence Cooke, Eric Zinman, Glenn Spearman, Raqib Hassan, Charlie Kohlhase, Steve Norton, Keith Hedger, Mark McGrain, Sydney Smart, Matt Samolis, Martha Ritchey, Larry Roland, Dennis Warren, Yuri Zbitnov, Craig Schildhauer, Keith Fullerton Whitman, Leslie Ross, Rob Bethel, Wayne Rogers, Eric Rosenthal, Taylor Ho Bynum, Tatsuya Nakatani, James Coleman, B’hob Rainey and George Garzone. PEK met cellist Glynis Lomon when they played together in the Masashi Harada Sextet which existed between 1990 and 1992. They developed a deep musical connection which they continued following the MHS; first with the Leaping Water Trio for a few years and then with the first version of Leap of Faith in 1994. Leap of Faith was very active in Boston from that time until 2001 and went through a series of several core ensembles which always included both PEK and Glynis. Other key Leap of Faith core members during this period were Mark McGrain (trombone), Craig Schildhauer (double bass), Sydney Smart (drums), Yuri Zbitnov (drums) and James Coleman (theremin). Leap of Faith was always a very modular unit with constantly shifting personnel and many different guests. The early Leap of Faith period concluded in 2001 with a dual bill at an excellent room at MIT called Killian Hall with George Garzone’s seminal trio the Fringe. At this time, PEK changed careers for his day gig, returning to college for a computer science degree and beginning to work in the structural engineering industry at Simpson Gumpertz & Heger. He became far too busy to continue the heavy music schedule, and preferring not to do music casually, he entered a long musically dormant period. Flash forward to early 2014. PEK was a regular mail order customer of Downtown Music Gallery, the premiere specialty shop in Manhattan for free jazz, contemporary classical and other new music. While in New York on SGH business, he went down to DMG and had a lengthy conversation with proprietor Bruce Lee Gallanter about the early Leap of Faith period. He then sent Bruce a package of about 15 CD titles from the 90s and was pleasantly surprised when Bruce managed to sell nearly all of it. This public interest in the old catalog spurred PEK into getting back into performance. He reformed Leap of Faith with Glynis Lomon (cello, voice, aquasonic), Yuri Zbitnov (drums) and newcomer Steve Norton (clarinets and saxophones) and started to record and perform in early 2015.