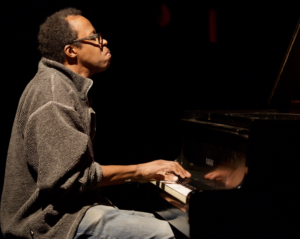 With his unique and recognizable style, pianist Matthew Shipp worked and recorded vigorously from the late ’80s onward, creating music in which free jazz and modern classical intertwined. He first became well known in the early ’90s as the pianist in the David S. Ware Quartet, and soon began leading his own dates — most often including Ware bandmate and leading bassist William Parker — and recording a number of duets with a variety of musicians, from the legendary Roscoe Mitchell to violinist Mat Maneri, the latter another musician who began making a name for himself in the ’90s. Through his range of live and recorded performances and unswerving individual development, Shipp has come to be regarded as a prolific and respected voice in creative music into the new millennium.

Born in 1960 and raised in Wilmington, Delaware, Shipp grew up around ’50s jazz recordings. He began playing piano at the young age of five, and decided to focus on jazz by the time he was 12. He played on a Fender Rhodes in rock bands while privately devouring recordings by a variety of jazz players. His first mentor was a man in his hometown named Sunyata, who was enthusiastic about a variety of subjects in addition to music. Shipp later studied music theory and improvisation under Clifford Brown‘s teacher Robert “Boisey” Lawrey, as well as classical piano and bass clarinet for the school band. After one year at the University of Delaware, Shipp left and took lessons with Dennis Sandole for a short time, after which he attended the New England Conservatory of Music for two years.

Shipp moved to N.Y.C. in 1984 and soon met bassist William Parker, among others. Both were playing with tenor saxophonist Ware by 1989. Meanwhile, Shipp had debuted as a recording artist in a duo with alto player Rob Brown on Sonic Explorations, recorded in November 1987 and February 1988. Shipp married singer Delia Scaife around 1990. He then went on to lead his own trio with Parker and drummers Whit Dickey and Susie Ibarra. Shipp has led dates for a number of labels, including FMP, No More, Eremite, Thirsty Ear, and Silkheart. In 2000, he began acting as curator for Thirsty Ear’s Blue Series. This excellent series hosted a number of Shipp‘s own recordings, as well as the recordings of William Parker, Tim Berne, Roy Campbell, Craig Taborn, Spring Heel Jack, and Mat Maneri. The following year saw the release of Nu Bop, an exploration into traditional jazz, followed closely by its 2003 counterpart, Equilibrium. In 2004, Shipp released Harmony and Abyss, a meditation on repetitive melodic and harmonic structures. One arrived in January 2006 and Piano Vortex followed a year later.

4D, featuring Shipp on solo piano, was released by Thirsty Ear early in 2010. It was one of several recordings from the pianist in the initial years of the 21st century, which included a two-disc solo piano recital entitled Creation Out of Nothing: Live in Moscow on the SoLyd Records imprint and the stellar trio set Night Logic, with Joe Morris and former Sun Ra saxophonist Marshall Allen, on the Rogue Art label. Shipp kept up the pace in 2011, kicking off the year with the double-CD offering Art of the Improviser, which showcased him in two different live settings: one solo and one in a trio with bassist Michael Bisio and drummer Whit Dickey. In the spring he released a duet recording with alto saxophonist Darius Jones titled Cosmic Lieder on the AUM Fidelity label. In 2012, he re-formed the trio with Bisio and Dickey for Elastic Aspects. Shipp entered into a prolific collaboration with saxophonist Ivo Perelman for a slew of projects that year, and 2013 included a duet, trios, and quartets with various personnel, all issued by Leo Records. Titles included The Gift, The Clairvoyant, The Foreign Legion, A Violent Dose of Anything, Enigma, The Art of the Duet, Vol. 1, The Edge, and Serendipity. In the fall of 2013, Shipp released the solo piano offering Piano Sutras for Thirsty Ear, as well as a retrospective for the label entitled Greatest Hits and a duet offering with saxophonist John Butcher, Fataka 2.

Shipp maintained a prolific release and touring pace in 2014. First to appear was the trio date The Roots of Things in February with Dickey and Bisio, followed by two more sets in various ensembles with Perelman. The first, titled The Other Edge, was issued in March and featured the pianist’s quartet backing the saxophonist, while the second, released the same month, was Book of Sound, a collaborative recording between Perelman, Shipp, and Parker. Symbol Systems, a solo piano outing, appeared in May from Lithuania’s No Business label, while The Darkseid Recital, a second chapter in Jones‘ and Shipp‘s “Cosmic Lieder,” was released in August by AUM Fidelity, followed by the solo piano offering I’ve Been to Many Places on Thirsty Ear in September. That year, the French Rogue Art label issued no less than four Shipp-led dates compiled from several years of performances. They included the solo Piano (2008); a duet album with Evan Parker titled Rex, Wrecks & XXX (2013); Right Hemisphere with Brown, Dickey and Morris (2008); and Declared Enemy: Salute to the 100001 Stars: A Tribute to Jean Genet with Parker, Gerald Cleaver, Sabir Mateen, and Denis Lavant (2006).

The following year saw two more releases from the label. Our Lady of the Flowers was a Genet tribute follow-up a decade on (sans Lavant), and the controversial but still widely celebrated trio recording To Duke. Shipp also issued a pair of duet recordings: Live at Okuden: The Uppercut with Polish reed and woodwind master Mat Walerian on ESP-Disk, and Callas with Perelman for Leo.

Associations with both men produced more 13 more recordings in 2016 and 2017. Complementary Colors and Corpo were duo dates with Perelman (the pair released 13 albums together before 2017 was out), while Butterfly Whispers added Dickey to make it a trio. Live at Okuden: Jungle with Walerian and Hamid Drake, capturing a performance from 2012, was released by ESP-Disk. The pianist issued a trio date titled Piano Song in early 2017, with Michael Bisio on bass and drummer Newman Taylor Baker. Produced by Peter Gordon, it marked Shipp‘s swan song as a recording artist for Thirsty Ear, though he remained curator of its Blue Series imprint. An ESP-Disk trio date with Walerian and Parker was issued as Toxic: This Is Beautiful Because We Are Beautiful People during the late spring.

In early 2018, Shipp released no less than three albums. In January, Accelerated Projection, a duo date with Roscoe Mitchell was issued by France’s Rogue Art label. A month later, Shipp released two dates through ESP-Disk simultaneously: Sonic Fiction, a quartet date with Walerian, Bisio, and Dickey, and the solo piano offering Zero in February. In late 2018, Rogue Art issued a duet album with Shipp and viola player Mat Maneri called Conference of the Mat/ts. The following year, the label released three more Shipp albums: All Things Are, a trio date with Michael Bisio and Newman Taylor Baker featuring flutist Nicole Mitchell; another trio album, Symbolic Reality, with Maneri and William Parker; and What If?, a duet record with trumpeter Nate Wooley.