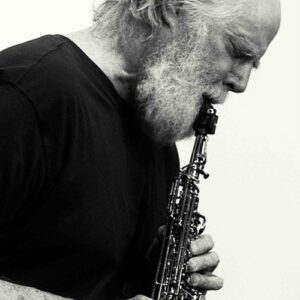 Described twenty-five years ago as an “undergrounder by design,” Jack Wright is a veteran saxophone improviser based mainly in Philadelphia but living in Easton, PA. In 1979, after an academic career teaching at Temple University (European History) and activist politics, he returned to the instrument of his youth. Almost immediately he discovered free improv, virtually unknown at the time; he is one of the few who have played this exclusively since then. He plays mostly on tour through the US and Europe in search of interesting partners and playing situations. Now at 76 he is still the “Johnny Appleseed of Free Improvisation,” as the late guitarist Davey Williams called him back in the 80s, continuing to inspire musicians, playing and organizing sessions and gigs with visiting and resident players old and new. His Spring Garden Music House has been around since 1977, for the past twelve years housing only improvisers and providing space for sessions.

He has been able to avoid the standard career aimed at visibility and prestige, seeing it as a hindrance to musical growth. The partners he’s preferred over the years have also been mostly unknown to the music press, and too numerous to list here. His current focus is with the ever-changing underground scene, of whom he finds the most promising to be his partners Zach Darrup, guitar, Evan Lipson, double bass, Ben Bennett, percussion, Matt Tomlinson, bass guitar, Ron Stabinsky, piano, and Patrick Crossland, trombone.

Jack is a “musician’s musician” yet unschooled in music, developing through interaction with partners and his version of private discipline. He’s said to have the widest vocabulary of any, an expert at leaping pitches, punchy, precise timing, the entire range of volume, intrusive and sculptured multiphonics, vocalizations, and obscene animalistic sounds. You’ll hear the most conventional jazz sound one minute and “post-electronic saxophone” the next. His playing sums up his 40 years of improvising, from lyrical, Ornette-style free jazz at first to the hard-blasting version, very reduced, quiet playing around 2000. In the past ten years he’s come back to more physically engaged playing, but with a phrasing and space unique among sax players.
In Jan. 2017 his book was published, The Free Musics, and has become very popular among improvisers. He has been writing since the 80s, seeking to comprehend not just the beauty of this unsettling music but its implications for the music world and the social order. Consistently promoting free playing as the ground zero of music, he has been open to playing with anyone who asks.
A reviewer for the Washington Post said, “In the rarefied, underground world of experimental free improvisation, saxophonist Jack Wright is king.” But for your own assessment listen to the music he and his partners create: Spring Garden Music, for sounds and writings.