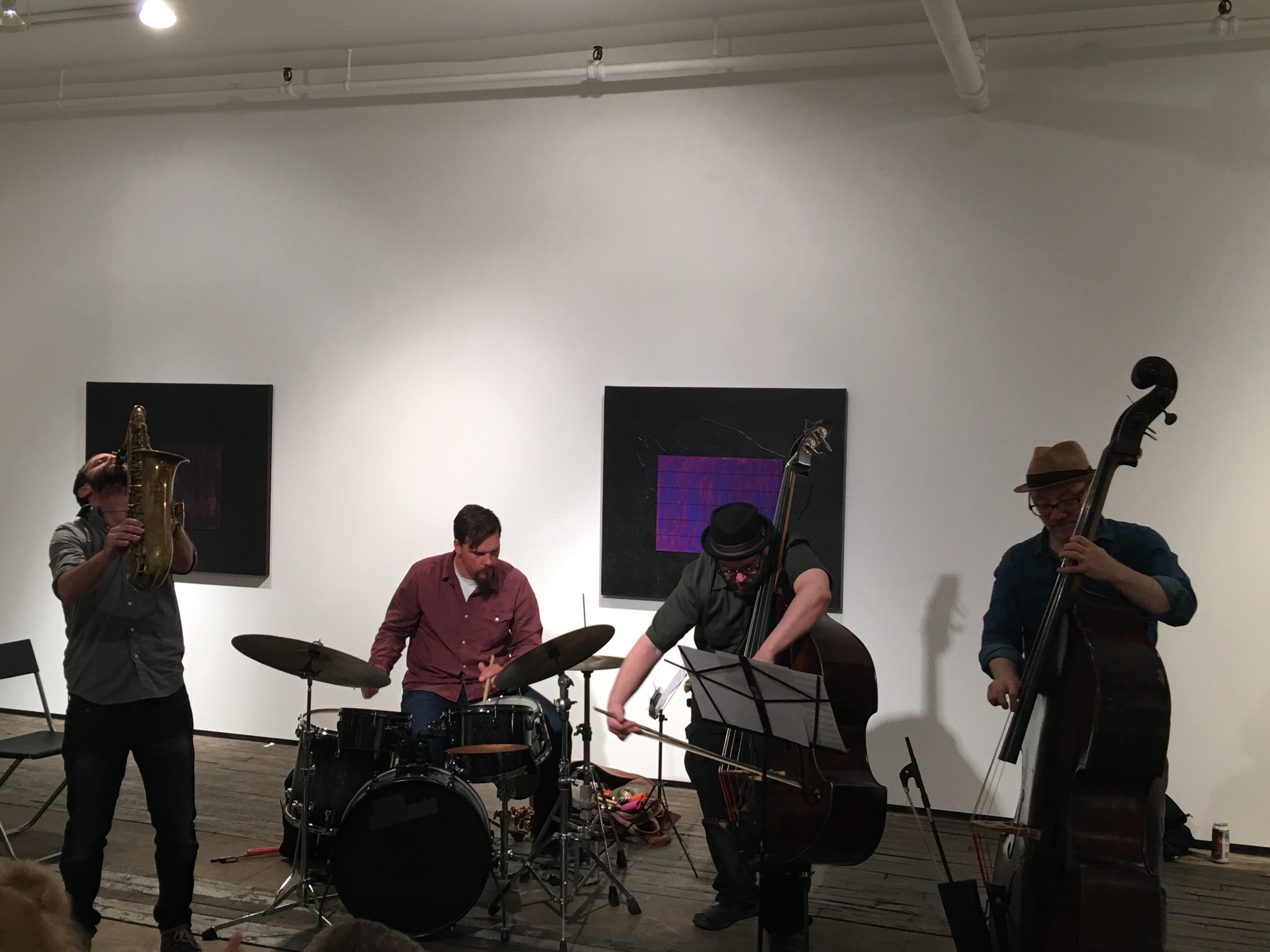 Yoni Kretzmer has embraced a more lyrical voice on tenor saxophone over the past year. Evidence of his significant development in recent years as a musician, composer, and bandleader were on full display on Tuesday night at the Zürcher Gallery in Manhattan. The quartet played four pieces, many of which appear on their 2015 release Book II (Out Now Recordings). Kretzmer was joined by Reuben Radding and Sean Conly on basses and Mike Pride on drums.

The band opened with a piece titled “Giving Tree” which began with cool, oscillating tones that built patiently toward fiery peaks of sound. As the band shifted between quartet, trio, duet, or solo formations, they exhibited some really intricate and rewarding interactions. Kretzmer’s arcing solo unfolded into a duet of Radding and Pride that eventually added Conly. The dark, vine-like intertwining bass lines consistently added to the robust center of the music, while saxophone and drums exploded on all sides. Both bassists also performed solos that were free of right angles and had plenty of slides, bends, and constant movement that allowed the shape of the music to remain malleable and flexible.

On the second piece, “Polytonal Suite,” Kretzmer’s mournful sound really began to take shape. His wavering tone, set over dark, earthy bass and energized, fleeting drum work, seemed to comment on the vulnerability of the human condition, vitality, and endurance. That mood continued into the third piece, which also featured both bassists using extended techniques to highlight minimalist moments and to move into buoyant, at times thin, sounds. The closing piece, “Number 4”, was their longest of the night, returning to Kretzmer’s wavering pitch and gong work from Pride that flashed like momentary shafts of light against the dark backdrop. Eventually Kretzmer’s sound filled whatever open spaces remained within the overall group sound, washing over the others and at times, adding the white froth at the peaks of the waves built from below. This piece, even more than the others, seemed like a celebratory, exclamation of life. A drum solo, set within the same spirit of the music, worked towards a fitting end with a solitary gong strike.

Zürcher Gallery, which exhibits contemporary art, has excellent acoustics and Kretzmer’s band had a warm sound in the space. The gallery is hosting some upcoming events in a similar vein, so keep an eye on their concert listings. Yoni Kretzmer’s next performance is with his all-start quintet at Downtown Music Gallery on May 1.