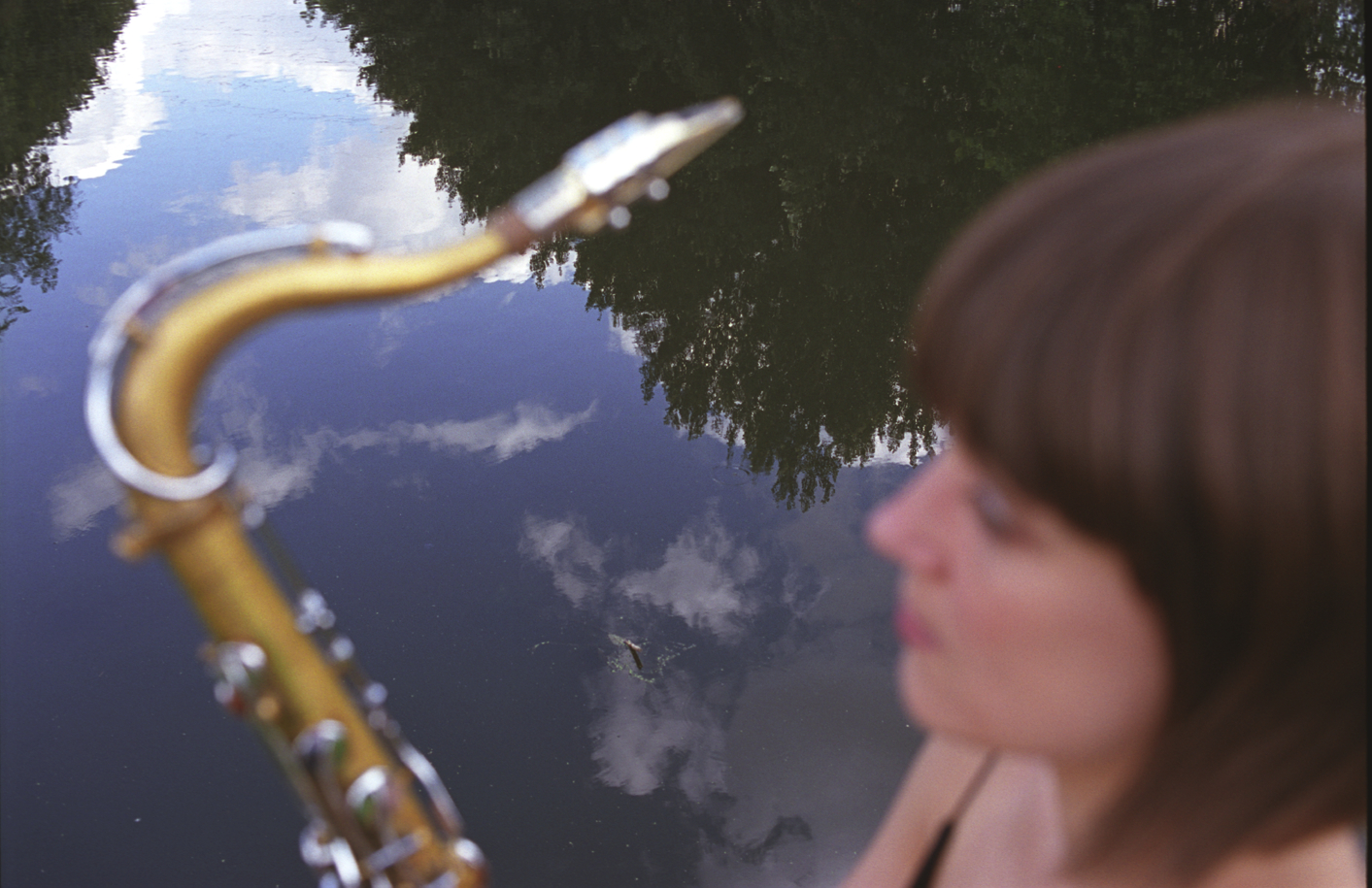 Ingrid Laubrock has hit the New York scene like a bombshell over the past four years. Having played nearly twenty years on the London scene, Laubrock began making frequent visits to New York in 2008 and formally relocated to the city the following year. Since that time, she has become one of her generation’s leaders through her composing, playing, and diverse associations with some of the most prominent figures making music in New York today.

Laubrock leads a number of groups. Her most prominent band, Anti-House, a quintet with Mary Halvorson (guitar), Kris Davis (piano), John Hebert (bass), and Tom Rainey (drums), has released two records to great acclaim: a self-titled record in 2010 and Strong Place in 2013. In addition, she leads a quintet in her own name with Tim Berne (alto saxophone), Ben Gerstein (trombone), Dan Peck (tuba), and Rainey. She also plays in a number of collaborative contexts including LARK (with Ralph Alessi, Davis, and Rainey), Paradoxical Frog (with Davis and Tyshawn Sorey), and a duo with Rainey.

I had the opportunity to talk with Ingrid about her music earlier this month.

Cisco Bradley: You established yourself by playing for nearly two decades in London. How did you first become involved in the New York scene and the Brooklyn scene in particular?

Ingrid Laubrock: I guess I played a lot of sessions…the birth of many bands! The first group I was involved in, started very soon after arriving here and was the result of a session Kris Davis invited me to. Paradoxical Frog is a collaboration with her and Tyshawn Sorey. We got together and played at Kris’ house and just clicked. A little later I met Mary Halvorson and started my group Anti-House. I already knew the bass player John Hebert before living here. He was introduced to me by my friend Jeff Williams, who lives part of the year in London and shared a rehearsal room with me. And drummer Tom Rainey was a part of my nonet in the UK.

CB: What collaborators have been particularly important to how you have developed as a musician since coming to New York?

IL: The same musicians I mentioned earlier have been very important to me, Mary, Kris, Tyshawn, John and especially my husband Tom Rainey. To be able to play this much with Tom, listen to music together, etc., has been and is a huge enrichment in my musical life (and of course the rest of it, too). But there have been many others since then as well, even if we don’t necessarily perform that often together in public. Dan Peck, Ben Gerstein, Tim Berne, Nate Wooley, Mat Maneri, Taylor Ho Bynum, Josh Sinton to name but a few. New York and Brooklyn are so full of amazing musicians! I feel the biggest change in my musicals life, one I feel hugely blessed about,  is to have been invited to play with some of Anthony Braxton’s groups as well as working with the great musicians in the Tri-centric Orchestra. It’s a great community and Anthony’s music and vision blows my mind every time. In terms of composition,which takes up a reasonably large chunk of my time, it was also fantastic for me to have met George Lewis, who was the mentor composer for my first orchestra piece. He is very inspiring and gives honest critique that is very perceptive and to the point.

CB: How did your group Anti-House first come together?

IL: I met Mary at Barbes, where she was playing a gig with Tomas Fujiwara and the Hook Up. I asked her whether she would be up for playing a session with Tom Rainey and me. We all saw the potential I think,  and it became Tom’s Trio a little later. I had composed very little music since coming to NY as I felt I needed time to exclusively improvise for a while. After a while the urge to compose came back and Anti-House was born. It started of as a quartet with Kris guesting on a few tracks. I then enjoyed her contribution so much that she became a part of the group.

CB: In your mind, how has Anti-House evolved and progressed from your original ideas for the band to what you are doing now?

IL: Repeated interplay always changes the music –  as a composer, I feel I am only really hinting at the outcome, even though I notate quite a bit. In my music, I incorporate so much open improvisation and I tend to encourage musicians to take liberties and shape the music on their own terms. Anti-House has done two extended tours and played many festivals and other gigs, so we can now take the music “off the page”, let it go different places, and have fun with it.

CB: The quintet you lead in your name is a fairly new band, am I right? Could you talk about your concept for the group and why you selected those particular musicians for the group?

IL: Yes, this concert will be our second one. I had been thinking of a group with only horns and drums for a while. My compositions have become very linear in the last few years and often have many moving parts that complement each other. Usually my melodies are divided between instruments, and I don’t feel the need for more than four notes at once. I am also very interested in creating texture – the two brass instruments and two saxophones allow me to create textures where the sounds are both very alike and yet different at the same time. I am experimenting with microtones and very dark, dense clusters, yet at the same time the music has a definite rhythmic propulsion + groove for the want of a better word. It all sort of sounds like a brass band gone wrong. (One of my idea for a band name was Mariachi Mondays…but I have since given up on the idea…too weird). I think for all my projects involving composition, I tend to choose musicians whose playing has character and who are open-minded! I like strong personalities, sound, and expression and want to hear “her/him”, not just “great playing” in a generic way.  Some of my music is rhythmically complex, so the musicians in my bands tend to also have a great time feel. And it’s important to me that everyone has a strong sense for composition. Usually people I play with are fantastic composers in their own right. I need this as I want people to make their own decisions as to where the music can go night after night.

CB: You also perform in a duo with Tom Rainey and have a record to be released in February 2014. Could you talk about your approach to this duo and playing with Tom, in particular?

IL: Tom and I have been playing a lot together since 2007 and we have often thought about making a duo record. When we play duo, we improvise, but potentially with an open mind to going into tunes or any material of groups we have played in, if that happens, it’s usually in a very abstract way. This CD is completely improvised, but quite compositional in approach, although we didn’t fix anything. We are currently planning a tour across the U.S. (not all the way across, but hopefully up to Colorado via New Orleans) and are excited to have the CD to take on the road with us. Playing with Tom is so easy, he is such a master of color and has a great feel of when to move the music on. I usually just delve in and come out on the other side an hour or so later.

CB: LARK, with Tom, Ralph Alessi, and Kris Davis has also come together over the past couple of years. Could you talk a little about how that collaborative group formed and what you feel you have been able to express musically with that band?

IL: Kris, Tom and I have been playing together for a long time and Tom and Ralph as well. We always imagined the combination would work well. I think we played a session and Tom made a joke, like “where’s the gig”, then we played a gig and Ralph said “where’s the CD”. It sort of became a standing joke, until we actually had a chance to go into a studio and record. Chris Speed, who runs Skirl (apart from of course being an amazing saxophonist/clarinetist!) was kind enough to put it out. LARK is a group that improvises in a very strong compositional way. We use lots of texture, space, dynamics and ideas are developed over a long time.

CB: Do you have plans for another record with Anti-House? Given the comfort level you now have with the music and each other, what do you want to do next with the quintet?

IL: We have a 2-week tour planned for this year, and I am planning to compose new music for that, which I definitely want to record. The last two times, we went to the studio before going on tour, this time I am planning to do it afterwards, because I love the way the music develops through playing it night after night.

CB: What else do you have on the horizon?

IL: There are quite a few things I am excited about happening in 2014. I am really happy to have been asked to play the soloist 3 part for soprano saxophone in Anthony Braxton’s opera “Trillium J (The Non-Unconfessionables)”. I know already that It’s going to blow my mind. There will be four performances at Roulette, April 17-19. As part of the same celebration of Anthony’s music, I am going to be part of his new Falling River Music Nonet (04/12) and in Nate Wooley’s new quartet as well. http://tricentricfoundation.org/events/

The “Falling River Music Quartet” and Quintet is also going to Australia, New Zealand and hopefully Asia in June, all places I haven’t visited before.

Tom Rainey and I are going to tour the U.S. from May 14 – June 2 to promote our duo CD, And Other Desert Towns. The CD release gig is at Barbes on Feb 26, 2014. Tom also has a new release out in March, called Obbligato which basically features all the members of LARK + bassist Drew Gress. The music is a selection of standards.

My octet CD The Zurich Concert which is a live recording at the Rote Fabrik in Zurich is coming out on Intakt Records. I wrote the music for the New Jazz Meeting, 2011, and am excited that it is now being released.

The Anti-House tour/recording are planned for September and I am booking a tour for the quintet with Tim Berne, Dan Peck, Ben Gerstein and Tom Rainey for the Fall as well. I am also looking forward to reconnecting with my European friends, especially Ab Baars & Ig Henneman and Hannah Marshall & Veryan Weston later in the year and to all the gigs around NYC with my friends over here.

CB: Thank you so much for sharing all of this with us.