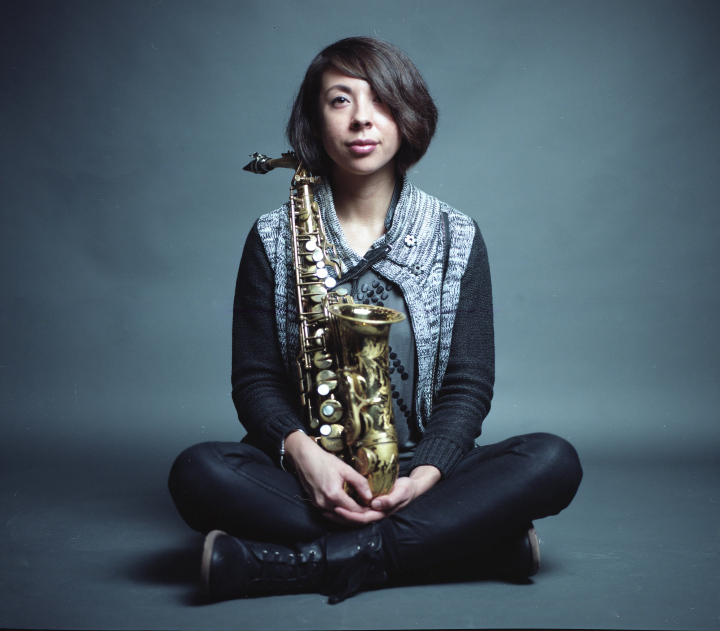 I took a bit of a sabbatical from this column to think. I needed to take some time to figure out what I wanted to say, and what it is I wanted to portray as time goes on. There are so many women in the world who play jazz. Many of them have passed away, many of them are girls, and others are in between. I don’t know how much age and womanhood has to do with jazz, but I’m willing to find out.

I’ve been writing about women who have passed away, reviewed a few records, but deep down, it was important to me to speak to someone who was “alive” in a sense of very aware and in touch with their experience as a woman and a jazz musician.

Saxophonist Sarah Hughes was playing a recording session in a home studio where I spend a lot of time. I tried to stay out of the way, but the way she played saxophone, her mindful free jazz, her unique tones, willingness to truly experiment with silence, sparseness, then explode into whatever the moment called for made me to take notice. As a critic, you only have so much time, and your ears become refined, but hearing Sarah peaked my instinct. Hughes is highly intelligent, sensitive and complex. I spoke with her and exchanged information, planning to speak to her for Feminist Jazz Review, but as the holidays loomed and the declaration to my editor about her became repetitive without any manifestation of a story, the Universe stepped in.

A few weeks after hearing her session, I found her sitting at a piano at a friend’s dinner party looking pretty down. I sat on the bench next to her and listened, and realized that the struggle of being a woman in jazz affects women to their cores. Their lives are affected by locker room talk, being compared or ushered in because they have a well known father or partner, having men walking up to them and hitting on them constantly as audience members in jazz clubs. It wears them down. It’s very real. I try to explain when people say, “Black Lives Matter,” it’s not just about police brutality, but the dehumanization of Black life. We don’t imagine a Black man who may or may not sell drugs, taking his daughters to school, taking his grandmother to the dentist, cooking dinner and washing clothes.

In the same way, we don’t think that women in jazz lose a sense of enjoyment, confidence and peacefulness when they’re harassed at a club or overhear men they have to go on stage with demeaning women. Sarah and so many others are as well. Because this is my column, we’ll get to her bio at the end of her interview. I think it’s important to get to know Sarah Hughes from her own words and experience.

Jordannah Elizabeth: What was one of your first experiences that drew you to playing the saxophone?

Sarah Hughes: My dad is a jazz pianist and I used to go to his gigs with my mom and my brother as a wee one. I always liked the saxophone. I liked how it sounded. He always played with the saxophonist, Tim Eyermann and I liked him. I liked his personality and they way he dressed. I liked how many instruments he played, he played the alto flute as well. Then, he would do this thing where he would sing with it too, which I thought was cool. And I was kind of drawn to it. So, I picked up the saxophone when I was in fourth grade.

JE: So, you played the saxophone from fourth grade until college, right into your adulthood. Did you take any breaks?

SH: No, I just kept playing.

JE: When did you notice hindrances in regards to your gender?

SH: It wasn’t as much of a hindrance that I noticed, but I just started feeling a little bit like the odd one. In high school, there were other girl saxophonist and it wasn’t any big deal, but when I got into college, the number [of young women] got smaller. I felt a little embarrassed because there were situations where I would be singled out for solos with a concert band, and I felt like I was getting special treatment, either because I was a girl playing a saxophone or because my dad is a musician. So, I always kind of doubted that I was getting the opportunities because of my skill level. I always kind of questioned it.

A point was made to me recently about jazz programs for young people and how during adolescence and puberty, putting girls up on the stage in front of people while their bodies were changing, may have brought natural insecurity that boys didn’t necessarily experience the same way. Adding that to the lack of mentorship and women instructors made it difficult for young girls to continue to play through adulthood. Did you feel that way?

I don’t remember feeling especially awkward, or any more awkward than the boys in the band. I don’t think I was that shy about it, I was always kind of perfectionist and felt shamed for not sounding good, but as far as feeling specifically awkward in my own skin, not really.

JE: Let’s bounce back to college, since you were very comfortable growing up in jazz, how do you think the special treatment and maybe microaggressions penetrating your consciousness or awareness?

SH: It was definitely after I had sex. That makes a huge difference as a woman. The dynamics of what happens as far as feeling perceptive, and then understanding how guys viewed you, as a girl in the sax section. Hearing behind the scenes of how they would talk about other girls in our music program. I started to feel uncomfortable and angry. I felt like I had to be more aggressive. There’s a wall that goes up and then the act of soloing and improving requires assertion and my relationship with the men around me could get a little bit strained because of the mind games played if there was any history I had with one of the players in the band. I would wonder if they respected me less because of what happened between us physically. I wonder when I’m soloing or asserting myself if they’re like, “Yeah, but I know how he is.” All these mind games.

JE: Did you ever bond with any of the other women in the jazz program?

SH: Amy Bormet, she was one of the first women that I met and then Janel Leppin, but [Janel] is a cellist and doesn’t play jazz. Starting a relationship with her kind of led me down this path of thinking, “Oh, if I don’t play jazz, there are more opportunities for feeling more included.” She’s plays in the more experimental and free realms of music. At the point when I met them, I was already pretty broken in a sense.

JE: Brandee Younger said to me, because she plays a more “feminine” instrument, playing the harp made it a bit easier to get along in jazz realms… she didn’t play harp because it’s a feminine instrument, but she could see how it would be a bit easier to play in regards to gender relations. The saxophone is a phallic instrument.

SH: Yeah, the saxophone being more of a phallic instrument, I actually had a mentor that explained to me how that energy happens and where it comes from, you comes from the groin area, projecting through the horn. He’s totally right, but it kind of changes the way I thought about sexually and how I related to other women, especially ones that don’t play. It is a process of becoming more stranded, a little separated from them.

That anger that emerged from overhearing a lot of “locker room talk” and not feeling included, if you could say something to men in the jazz community, what would it be if in regards to your perception of their behavior and presence?

Things are very different now than when they were then. I think that a lot of men have come more sensitive. I also, for myself have grown as a human and am not so sensitive to that. Everybody is sexual, and I have a few male friends who are very open with the locker room talk and I learned that that’s how their personality is. But if they’re being sexist and really cross the line, I’m able to call them on it and there’s no beef about it. I just express that they’re acting like an ignorant boy, there are times when I can be ignorant in how I stereotype men.

JE: So, you recently recorded new collection of music. What was the process like of deciding to record your music for the first time?

SH: I turned 31 and realized time’s a wastin’. Getting older was a big thing, but I also felt ready. I guess, musically, I’m not playing on the album very different from how I did [live] a couple of years go, but there’s something that clicked on a personal level. I think the walls that I put up as a young female saxophonist that creative a lot of defense mechanisms came down. The more people that I’ve been meeting who can disarm all of that and accept myself more in an honest way. That brought me to a point where I felt ready, I don’t feel like such an awful person for all of these facades that had been built up that made me feel undeserving of seeing myself as an actual musician.

JE: I think culture goes through cycles and 2017 and 2018 have been feeling a bit like a feminist social experiment. We’re having another layer of the same gender conversation. How has this election and #metoo affected you as a musician in a male dominated genre?

SH: It’s very spiritual for me. When I’m playing freely, in my daily practice, I find my thoughts wondering because it’s meditational when I’m playing, and playing alone is playing with silence, essentially. And it makes me think about our society and how playing with silence is something that’s not highly values. You think about the popular music and it’s all very loud, and very insistent. I just think that somebody like Trump being in office and the “Grab ‘em by the pussy,” thing just shows that culturally, we need to value playing with silence and that kind of receptive space. As an audience member listening to loud, in your face music, that’s a certain way of being receptive, but when you’re an audience member in a room with someone playing with silence, there’s a different kind of receptiveness that allows you to meditate with the musician.

I think it leads to more thoughtfulness and emotional and thought exploration.

JE: How would you describe your music?

JE: Who are the players on your new record?

JE: What was your inspiration and the tone of the album?

SH: I’d say the tone of the album is poetic. Poetic music inspired by the current state of myself and the world around me. It is a demand for liberation, a prayer for serenity, and a reflection of acceptance.

JE: Is there an album title? If so, why did you name it such?

SH: I named the album “Coy Fish”. I love word play. “Fish” because the sensation of playing this music often felt like being submerged together in a pond. “Coy” because I feel the members of the band share a certain outer shyness paired with an inner willingness to fully engage.