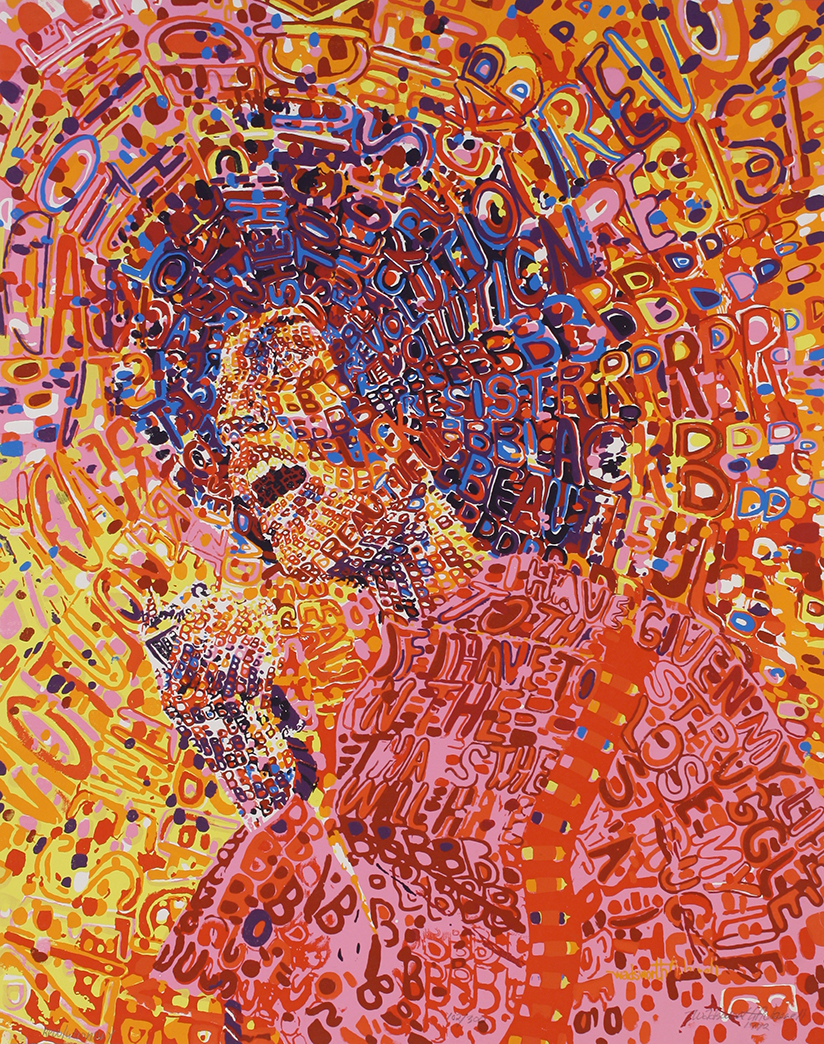 A Review by John Morrison

“The Freedom Principle” is a common thread that runs through Black life in America. In the abstract, it is the collective/culminating desire for autonomy and self-determination in an oppressive society. This principle lives as a historical continuum, manifesting itself in our collective cultural, political and spiritual moods, challenging the dominant narratives and inching us closer to deeper and broader possibilities for Social liberation. The Freedom Principle: Experiments in Art and Music 1965 to Now and Endless Shout are two multi-media exhibitions currently hosted in tandem at the Institute of Contemporary Art in Philadelphia, that explore this principle as it has manifested itself in Black art and music.

Since the height of the Slave Trade, Black music has occupied a unique position in the whole of American Social life. It is within Black music that American society’s political, intellectual and sexual boundaries are constantly challenged and ultimately redefined. Historically, Black music in particular and Black art in the Americas in general has been animated and energized by the collective desire for freedom and self-determination. This desire, spiritual, intellectual and physical to break the deep and far-reaching social impediments placed upon Black people by the systemic forces of capitalism and white supremacy, acts as an ever-evolving principle, a living thread that follows Black folk through our history as a stolen people on stolen land.

In the wake of the Be-Bop revolution that reshaped Jazz in the 1940s, Black musicians in America wrestled together the forces of aesthetic and intellectual modernity, urbanity and Blackness into a revolutionary, prophetic force. In time, the mutually arising Civil Rights movement and Bop dovetailed and a new praxis of Black freedom and expression developed but it was Jazz and the culture that surrounded it that opened up new dimensions of personal expression and (limited) social autonomy. Describing the way in which the Be-Bop subculture’s vision of freedom predated the advancement of the broader Black political struggle, Writer Stanley Crouch once famously quipped that “Jazz musicians didn’t join the Civil Rights Movement. The Civil Rights Movement joined them.” As Bop blossomed as a musical and cultural lexicon, the political struggle for desegregation had not yet reached critical mass.

By 1959, the Civil Rights movement was in full swing with local and nationwide grassroots organizing of direct action, voter registration and legislative appeals. Black people were attacking the institutions of systemic white supremacy on multiple fronts. In the same year, a fiery and exploratory new music, centered around free improvisation had emerged. Initially, centered around a small community of musicians scattered throughout the country, spearheaded by innovators like Ornette Coleman, John Coltrane, Sun Ra and others who sought to break loose from the rhythmic and harmonic conventions of Be-Bop, which by then had begun to lose ground as Jazz’s central progressive musical force. This new, highly, experimental music emerged as the aesthetic progenitor and eventual soundtrack of the socio-political movement that we’d later come to know as Black power.

In the Summer of 1966, members of the Student Non-Violent Coordinating Committee descended upon the state of Mississippi in an attempt to register Black voters and build political power within the notoriously oppressive part of the deep South. Faced with State repression and harassment from the Ku Klux Klan, some S.N.C.C. organizers began to develop more radical rhetoric, moving away from the calls for “Equal Rights” and “We Shall Overcome”. S.N.C.C. organizers Stokely Carmichael (Kwame Ture) and Willie Ricks (Mukasa Dada) are commonly thought of as the fathers of Black Power, first raising the slogan during a speech in the town of Greenwood Mississippi following arrest of several S.N.C.C. members and the shooting of fellow Civil Rights organizer James Meredith during the March Against Fear. “ This is the twenty-seventh time I have been arrested and I ain’t going to jail no more! The only way we gonna stop them white men from whuppin’ us is to take over. What we gonna start sayin’ now is Black Power!” – Stokely Carmichael.

As the Civil Rights movement progressed, winning great concessions and chipping away at the foundations of legal segregation and disenfranchisement, the makeup of Black resistance intensified in tone. This intensity was especially present among young, inner city Black youth radicalized by a decade of direct action, riots and assassinations and disenchanted by the insufficient promise of integration. The respectability and tireless nobility of the old guard were rejected and a new zeitgeist began to take root in the consciousness of Black America.

Far deeper and broader than a simple political movement, Black Power in the late 60’s and early 70’s was a vibrant composite of various African diasporic influences such as Yoruba art and spirituality, colliding with the Marxism of the Black Panther Party, a revitalized Pan-Africanism and many many more disparate elements each reflecting a tiny catalytic point of Black America’s desire for a new, all-encompassing identity. It was during this era that Black people sought to posit Blackness as the ontological center of the universe by radically re-imagining multiple areas of human social activity; language, mythology, philosophy, spirituality, politics, music, art, history, theater,
music, economics, clothing, diet, haircare and more. Partially in response to the socio-economic and intellectual crisis that integration wreaked on Black America, an increased emphasis on the importance of community. Black neighborhoods, once seen as inescapable ghettos with its inhabitants forced in place by the “invisible” hands of Capitalism and White Supremacy were re-envisioned as vibrant communities to be celebrated and molded to suit the needs of the people. In the Black power era. Black communities would serve as physical and intellectual incubators for a future Black social and political revolution, one of the primary strategies to used to achieve these ends was the development of Black owned and controlled businesses and cultural institutions.

This concept of Black/African centered community-building was put into practice with a fervor. Throughout the the country, numerous Black/African-centered cultural centers like Arthur Hall’s Ile Ife Cultural Center in North Philly, The East in Brooklyn, Harlem’s Black Repertory Arts Theater and
others were established throughout the years of 1965-75’. These cultural centers served as beacons of Black cultural, political and social autonomy. This era also witnessed a flowering of progressive Jazz labels like Black Jazz, and the legendary Strata East. These new institutions situated themselves as the spiritual heart of a new community by centering and elevating values such as independence, intra-communal collaboration and mutual aid, these institutions and the people that established were posited community that would help launch a global revolution by tapping into the fire and creative energy of its people.

This wave of cultural and political energy was particularly strong in the city of Chicago. A longtime hotbed of radical Black music, art and political praxis. This energy was felt within the windy city’s Electric Blues, it’s Jazz and in the political genius of murdered Black Panther Party leader Fred Hampton Sr. Much like their national kinfolk, Chicago’s Black visual artists and Jazz musicians were intent on pushing not only the boundaries of their respective disciplines but the very character of social life with their emphasis on communal living spaces as well as free creative associations in which members shared knowledge and resources. Two of the most impactful collectives to emerge out of the Chicago scene were the Association for the Advancement of Creative Musicians (AACM) and the African Commune of Bad Relevant Artists (AfriCOBRA). Founded by pianist/composer Muhal Richard Abrams, pianist Jodie Christian, Phil Cohran and drummer Steve McCall, the AACM extended membership reads like a who’s who of the past 50 years of avant-garde Black music: Anthony Braxton, Henry Threadgill, Amina Claudine Myers, Jack DeJohnette, Lester Bowie, Roscoe Mitchell, Matana Roberts, Wadada Leo Smith and many others. Historian/Composer and AACM member Douglas R. Ewart describe the group’s mission as twofold; “The AACM was founded on the idea of self-determination and to spotlight both community and individual development”, presenting a new vision and practice for both the artist involved and the community that he or she was a part of. While the AACM was rewriting the limits of music, AfriCOBRA was carving out a similar path in the visuals arts. Playwright and Black Arts Scholar Larry Neal describes the legacy of AfriCOBRA as the result of a prophetic vision brought to life and sustained by its deep community roots ” AfriCOBRA artists are visual griots of the African American community, an imagery that illuminates the beauty and glory of the Africans’ experience in the West. They present to us an iconography bestowed on them by the pressing and always exciting culture of the African American. ” The work and legacy of the AACM and AfriCOBRA are heavily featured in The Freedom Principle: Experiments in Art and Music: 1965 to Now an ambitious multi-medium exhibition organized and curated by Naomi Beckwith and Dieter Roelstraete. The exhibition melds the work of  60s/70s Chicago avant-garde with the work of contemporary artists to create a whole and wildly ambitious conversation between the radical aesthetics of the past and present.

Upon entering into the exhibit, one is greeted by a large, double sided screen, suspended from the ceiling, projecting a stark, black and white video of the Douglas Ewart/George Lewis Quartet performing an ecstatic cover of Albert Ayler’s “Spirits Rejoice”. The performance is a part of Canadian filmmaker Stan Douglas’ 1992 video installation Hor-Champs, created in 1992, the year of the violent mass Rebellion that emerged following the acquittal of white police officers in the beating of Rodney King.

The fiery and urgent yet profoundly minimal and graceful work was originally dedicated by the artist to the people of South Central Los Angeles . Spread across multiple rooms and incorporating various audio and visual disciplines, The Freedom Principle immerses attendees in a multi-sensory world of revolutionary Black Art and Music. The exhibition gives a broad overview of the colorful visual aesthetic of the period including drawings, sculpture, concert bills, album covers, transcripts of musical compositions, paintings, collages and mixed-media pieces like Muhal Richard Abrams’ stunningly disjointed and modern piece View From Within, 1985.

View from Within (1985) by Muhal Richard Abrams

Revolutionary (1972) Wadsworth Jarrell’s classic portrait of activist and former Black Panther organizer Angela Davis. It is quite possibly the most iconic single piece in the entire exhibit, Revolutionary’s explosive form and dramatic color composition encapsulates the violent, optimistic timbre and spirit of the time.

Giving ample space to both past and contemporary work as well, The Freedom Principle/Endless Shout exhibits how this centuries old drive toward a deeper, broader expression of freedom, continues as an animating spark in present day Black American Art & Culture.