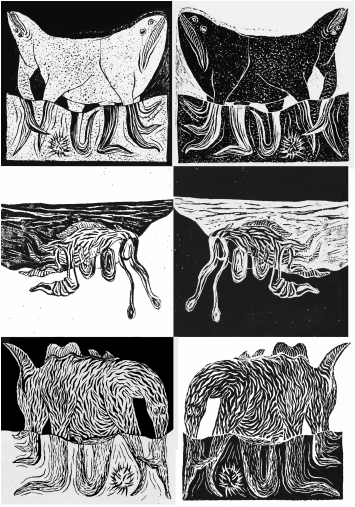 Recorded by Sami Bouvet, Paris, 2014; artwork by My Lê Chabert

If you are interested in purchasing a copy of this record, you may obtain one directly from the artist here.

hOULe is a fascinating and vital solo recording from New York-based, French-Haitian musician Anaïs Maviel. I emphasize that it is a solo up front so that listeners are not caught unawares: throughout the album, we hear two very distinct musical personalities communicating with each other, complementing each other, contrasting and alternating with each other. This is a brilliant offering that raises the bar for solo recordings. One could be excused for thinking these are two separate artists performing together. In fact, Maviel performs her shimmering, playful, fractally expanding vocal lines and deceptively simple percussion sounds at the same time, with equal facility and felicity. The dialogue between Maviel’s singing and percussion, the independence between the two distinct personalities, is unheard of. It is impressive to witness live and on this recording it is utterly captivating.

Throughout hOULe, in addition to the surdo (a Brazilian bass drum), there is ingenious use of a singing bowl. Maviel employs it for sharp, rhythmic punctuations, lilting grooves, bell tones, and perhaps most intriguingly, as a sustained, wavering background that recalls electronic synths on a recording completely devoid of any electronics, overdubbing, or studio manipulations.

The album begins with percussive polyrhythms that Maviel consistently shifts to avoid predictability. It calls to mind the jangling of a caravan lumbering across a desert. Meanwhile Maviel vocalizes bird sounds that are simultaneously delicate and wild on this first, brief introduction.

The Blues is referenced on the second piece, ‘Blues Ferraille’, which at 12:47 is twice as long as any others in the cycle. Out of scraping and rattling percussion, the voice unfolds like an incantation, growing from and out of Central Africa and seeming to visit cultures that might have been cherished by Don Cherry during the years he worked with Nana Vasconcelos and Colin Walcott in the trio Codona. There is a brief stop on 52nd Street, just long enough to take in a fragment of a Bebop drummer’s brush solo, and then the rattling of the drums gives way to heartbeats as the vocal line continues to stretch and develop in multiple directions.

A pair of pieces, entitled ‘Bois, Or #2’ and ‘Bois, Or #1’ follow. They are at the same time playful and studious, each seeming to investigate a particular idea (in contrast to the other pieces, that just flow). The first (#2) alternates rhythmic metal gestures with vocal interjections, eventually leading up to a longer groove distributed among three percussion sounds, with vocal upswells turning into a melody. The track ends suddenly, followed by ‘Bois, Or #1’, with an off-kilter groove from the start and a nervously exploratory, melodic vocal line. Up to this moment Maviel’s voice has only appeared as vocalized and abstract sounds. In this piece we hear vague references to language: smudged consonants here and there.

Heavy percussion towards the end of ‘Bois, Or #1’ sets up ‘Le Vent’, the album’s shortest piece. It begins as a lovely acapella melody that Maviel quickly works into a triplet scheme, adding hand claps before letting the piece disappear into the distance.

A second pair of pieces closes the collection. ‘Gens de la Mer #1’ begins with propulsive, steady sixteenth note rhythms on the percussion. It is perhaps the most regularly pulsed moment on the record, over which Maviel delivers a vocalization that floats and swells without the need for arrival. Much of the forms on hOULe have this quality: they exist, they swell like water and float like clouds, movement is constant. While they all evolve out of a starting place, they never resolve into a final ending. And yet there’s the last track, ‘Gens de la Mer #3’, more meditative than the others, punctuated by a slow percussive heartbeat, on which Maviel’s voice travels through a number of different scales and tonalities before reaching an end to the set, a satisfying end, devoid of fanfare or sentimentality.