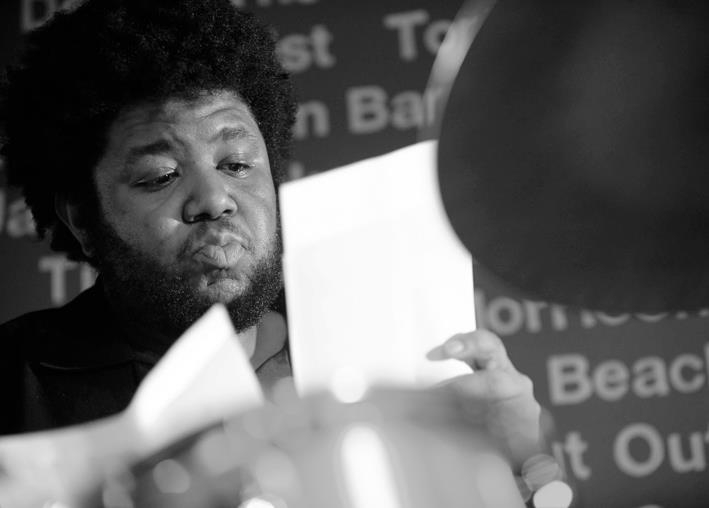 Composer, drummer, and trombonist Tyshawn Sorey begins a six-night residency at the Stone on Tuesday. This groundbreaking artist will be showcasing eleven different groups during his time there, including ensembles that include many of his closest collaborators and bandmates since he became involved in the New York scene. The residency affords us the rare opportunity to hear him play live in duo with pianist Marilyn Crispell, as well as other groups with figures such as Mark Helias, Dave Burrell, and Henry Grimes. Sorey will also present a reunion of his original Koan Trio (first performance in five years) and a fun and challenging duo with pianist Matt Mitchell. Sorey’s Piano Trio, with Cory Smythe and Chris Tordini, will also give us a preview of their forthcoming Pi Recordings album, Alloy, to be released in October. Here is a full listing of concerts included in the residency:

Sorey was born and raised in Newark, NJ and developed a curiosity about new music from an early age. By high school he had found a handful of friends and elders in the community who also helped open doors. He grew up playing trombone and found himself rehearsing every Friday night with other like-minded people and playing small gigs and weddings. It was through a friendship with the late poet and jazz afficionado Halim Suliman, however, that he met Amiri Baraka, and soon thereafter he met, studied with, and performed with many established figures such as Steve Colson, Grachan Moncur III, John Hicks, and others. At Baraka’s house, Sorey was drawn into ongoing conversations about politics, music, and what was going on in Newark and its surrounding areas during that time. As he became more enmeshed in the community of musicians in Newark, he caught his first break when he was asked to perform in Baraka’s Lost Jazz Shrines project, and later on in a Baraka-led production with legendary drummer-composer Max Roach.

Within the culturally rich circle of luminaries in which Sorey had emerged, he began venturing into local jazz venues and nearby New York to listen and perform, all while still in high school. At that time, he began to build confidence through involvement in jam sessions at places like the Peppermint Lounge in East Orange NJ, Lenox Lounge in Harlem, Small’s in Manhattan, and a number of other clubs in the late 90s-early 2000’s, meeting emerging stars such as Jason Moran in those contexts.

Having gotten his taste of the New York scene, Sorey decided to pursue a B.A. in jazz performance at William Paterson University, where he studied concurrently with composers John Link and Anton Vishio, percussionists John Riley, Bill Goodwin, and Kevin Norton, and trombonists Gary Capatandes and Dick Clark. At that point, he seemed to be headed for a career as a classical trombonist, but it was the influence of Riley, James Williams, and like-minded students that led him towards pursuing his growing passion for jazz studies and drumset performance. His mentorship with pianist-composer Michele Rosewoman (along with his brief studies with Billy Hart and Ralph Peterson) however, was perhaps the most transformational period, as she introduced him to many new approaches to ensemble playing and composition. She later presented Sorey with his first opportunity to tour Europe with her band, Quintessence. Around 2001, he met pianist Vijay Iyer with whom he played in the latter’s trio, quartet, and the collaborative trio Fieldwork.

In the years that followed, Sorey began to develop his own groups. Though his teachers and fellow students had provided him a rich experience at William Paterson, he struggled to find real collaborators with whom to perform his increasingly complex music. In 2002, however, he met the great Anthony Braxton who encouraged him by saying, “You should do whatever it is that you are hearing, and believe in it.” Sorey set to it and by mid-2004 he had his first chances to perform as a bandleader at Zebulon Café Concert in Williamsburg, where he showcased his group Oblique. Playing there once or twice a month, he developed a corpus of more than forty compositions in which he experimented with contrapuntal composition, elaborate harmonic progressions, extended musical forms, and complex rhythmic strategies. By 2006, after a trip to Japan and during his study of Zen practice, the music was really changing as he began to assert himself a lot more as a composer and the first piece to take on this new shape was “Permutations for Solo Piano.” He began to explore music in a more organic way, producing rigorous music that had a lot less density, and allowed for open contributions from his band members. Eventually his efforts resulted in his brilliant debut record, That/Not, released on Firehouse 12 Records in 2007. Sorey next began to study the music of Paul Motian (1931-2011), who remains a huge inspiration, and the record that followed, Koan, was loosely dedicated to the late drummer and composer. Koan explored the binaries of sound and silence, but much to Sorey’s frustration, he found that, “the record was generally misunderstood.”

Seeking to expand his horizons, Sorey studied for a Master’s degree in composition at Wesleyan with Braxton in 2009. He found his mentor to be very encouraging in many ways, pushing Sorey both as a composer and improviser to embrace his creativity and to develop ways of articulating his music and ways to think about that music to others, often in literary form. Immediately after graduating in 2011, he recorded and released Oblique—I, selecting 10 of the 40 existing compositions that he had, “just to get it out there since most people didn’t know of it.” But in the years since, Sorey says he has moved very far away from that music. “Even if I return to it, I would write a completely new book of music.”

2011 also witnessed Sorey moving back to the greater New York area, where he could connect with the growing new community of composer-performers while also pursuing a doctoral degree in composition at Columbia University. Since then, Sorey has gained much greater visibility as a collaborator in groups such as Paradoxical Frog and the International Contemporary Ensemble. New collaborations also formed since the move “back home”; Sorey began working with established figures such as Myra Melford, Tim Berne, Dave Burrell, and John Zorn, among many others. Tyshawn continues to compose and perform regularly, and is mostly concentrating on developing an extensive book of music for his piano trio (performing Saturday night at the Stone for two sets), whose release on Pi Recordings, Alloy, is slated for later this year. Come out to Sorey’s residency at the Stone to see many of the resulting groups and inter-generational collaborations. It promises to be a very exciting week!