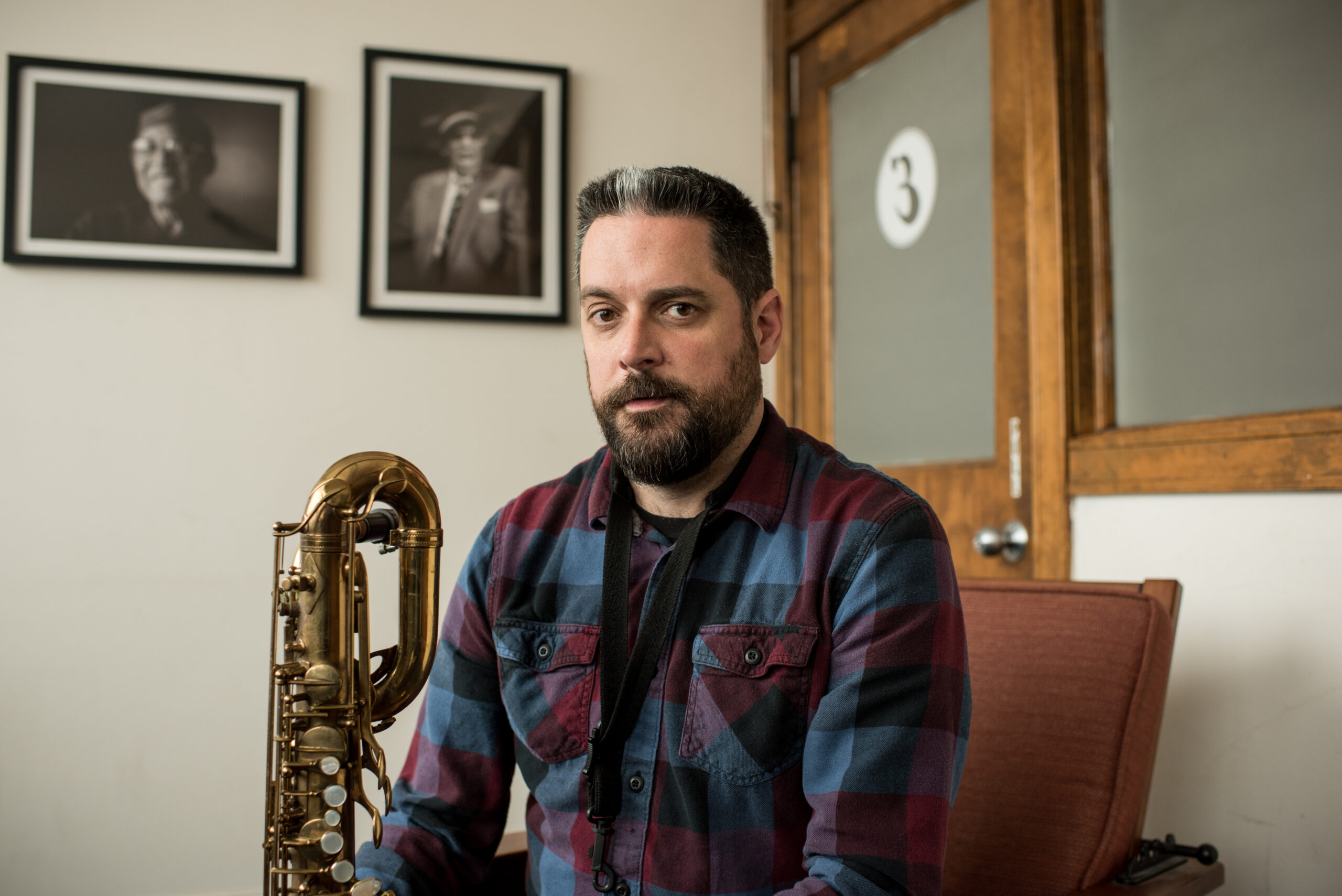 From saxophonist and composer Dave Rempis:

At the onset of the COVID pandemic in the US in winter 2020, I was on tour.  First in Europe for 10 days with Michael Zerang’s Blue Lights, ending with a performance with Michael and Elisabeth Harnik at the ArtActs Festival in Austria on March 6.  I then flew straight to Asheville, NC to start a tour with Kuzu (myself, Tashi Dorji, and Tyler Damon) on March 8.  In St. Louis on March 11, the severity of what we were facing was becoming clear.  We finished our last dates in Chicago, Milwaukee, and Madison, and two days later the country was in lockdown.

As an improviser, it felt like my job to figure out some way forward artistically.  So I did what I often do when “working” in this abstract art form feels too absurd; I put my head down and kept plowing ahead.  And it worked for awhile.  An early invitation to do an online solo performance on March 25, 2020, as part of the Quarantine Concerts organized by ESS in Chicago showed one potential way forward.  Although online performances sure aren’t ideal in a music that’s based on live in-person interaction, they were at least something.  I’d already been delving seriously into my solo playing since 2017 when I did a long solo tour and produced my first solo record, Lattice, so why not try to build on that further?

After a couple of other invites to do online performances through Hothouse and Fulton St. Collective in Chicago, I really dove in.  I launched a concept whereby I’d release a new digital album on my record label – Aerophonic Records – each week, culled from the many recordings I had on hand of various working bands and one-off projects spanning roughly twenty years.  Each new album would be accompanied by an online record launch solo performance on Wednesday nights, and all the proceeds from sales would be split evenly between the artists on each one, hopefully generating some revenue for some of my collaborators. Between the first week of May and the last week of August, I produced 15 of those digital albums. The broadcasts were done through Twitch using just an iPhone, all from my closet-sized practice space at Unity Lutheran Church in the Edgewater neighborhood of Chicago.  These concerts gave me the chance to work on new pieces each week, ranging from total improvisations, to tongue-in-cheek pop hits, to jazz standards. It also allowed me to talk somewhat extensively about my experiences in the music over the last 25 years, tying those into the music I’d chosen.  Many/most of those solo concerts are archived on my website here.  Some of those solo pieces also came out on The COVID Tapes, a hard copy release put out on Aerophonic in May 2021.

By summer 2020, as things seemed to be stabilizing a bit with the pandemic, I had my first invitation to do an outdoor concert from my friend Adrienne Pierluissi who owns a great beer bar in Milwaukee, WI called The Sugar Maple.  Percussionist and longtime collaborator Tim Daisy and I did three of these outdoor duo concerts between July and September 2020.  In 2021 we continued this Sunday afternoon tradition with a special guest each time including Michael Zerang – percussion, Jen Clare Paulson – viola, and Russ Johnson – trumpet.

Soon after that first outdoor concert in Milwaukee, the Hyde Park Jazz Festival in Chicago (for which I also work as Operations Manager) invited bassist Joshua Abrams to present an outdoor concert as part of our “Jazz Postcards” Series.  He convened our trio with Tomeka Reid on cello for that on August 14th, and we scouted out a location at a park two blocks from my house in the Uptown neighborhood of Chicago.  Seeing how well it worked, I continued this Friday evening series for the next two months, mostly playing for friends and neighbors.  That’s where it’s at, as Ornette said!  I couldn’t agree more.  I mostly worked with Tyler Damon on drums as a duo, sometimes adding Joshua on bass, and once adding Bill Harris for a double drum lineup.  That one was a beautiful finish to the series on an unseasonably warm 70-degree day in November, the same day the election was effectively called for Biden.  The feeling on the streets was jubilant, and the crowd that gathered for the concert was huge.   This tradition also continued in 2021, with weekly concerts from late May through early August, when my “regular” schedule started to become too busy again to permit this series to continue.  During these months, Tyler and I invited special guests each week including Mars Williams, Josh Berman, Katinka Kleijn, Jason Stein, and Jason Adasiewicz.

With these relatively limited performance opportunities, much of my focus in this period shifted towards putting out recordings.  I spent far more time on my record label than I ever had previously, and fans of the music really stepped up to help support; especially in 2020 when sales increased by about 200% over the best year I’d ever had previously.  So instead of being at home collecting unemployment, I was at home filling orders, running to the post office, and drafting marketing emails and social media posts.   In addition to the 15 digital releases that I put out in the spring and summer of 2020, Aerophonic has released 8 cd or LP releases since the pandemic started.  All of those are records that I play on, produce, market, and distribute as a one-man operation.   Those include:

AR032 – All Your Ghosts in One Corner  – Kuzu w/Tashi Dorji, Tyler Damon

After a very quiet winter of 2021, with no concerts at all until March, things started returning to normal, with my first indoor concerts in Chicago starting in June at regular haunts like Elastic Arts, The Hungry Brain, and Constellation, some regional concerts around the Midwest in summer and fall, ramping up to a full three-week tour of Europe in November with Kuzu.  That trip was fantastic, but as case counts were increasing rapidly in Europe at that time, it wasn’t quite the glorious return we’d been hoping for, since the specter of COVID still hung over our heads.  Even though lockdowns started to follow us from one country to the next, we made it through all 16 concerts in 7 countries, and got home without any major calamities just before Thanksgiving.  I then finished the year with two weeks worth of concerts and workshops in Chicago in December with a band called Sangliers, part of the French-American exchange titled The Bridge.

Outside of performing and running my record label, working as an organizer has been a central part of my role within the improvised music scene in Chicago for the last twenty years.  Currently, as the Board President at the 501(c)(3) organization Elastic Arts where I also present jazz and improvised music, a great deal of my time goes towards supporting the work that organization does across multiple artistic communities in Chicago.  In a normal year before the pandemic, Elastic Arts produced about 250 events per year, including two weekly series of jazz and improvised music.  And the pandemic was one of the most challenging times we’ve ever faced as an organization.  After looking into the abyss at the beginning of the pandemic, and knowing that this could not only wipe us out, but wipe out many of the artists we work with, it became apparent that we had a broader role to play at that moment.  Much of our early work in the pandemic focused on our Resilient Expression Fund, which fundraised and paid out roughly $25,000 in $500 grants to Chicago artists starting in April 2020.  While modest, these grants served as small bridges for artists in our community before unemployment and other larger emergency grants started to become available.  Aside from that, we joined many other venues in figuring out how to upgrade our technical capacities to produce and broadcast high-quality online streaming performances.  And as our Board of ten dedicated people, 20 subcommittee members, and roughly 12 producers and curators worked diligently to chart a strategic path through the mess of this time period, our Executive Director Adam Zanolini and assistant director Ben Billington worked to figure out ways to pay artists solid fees for the online and live performances that started to become possible by summer and fall 2020.  Although last winter’s spike derailed us again, by March of 2021 things were ramping up until we were back doing 4-6 events per week this past fall including larger events like the Catalytic Sound Festival that took place over three nights in October.

Also as an organizer, my role as Operations Director with Hyde Park Jazz Festival required a massive pivot in 2020.  As with Elastic Arts, HPJF felt that our biggest role during this time was to get money out to artists, and bring some live music to the neighborhoods in which we work.  Executive Director Kate Dumbleton decided early on that producing online content wasn’t enough, nor was it particularly satisfying for anyone.  So by July 2020, we were paying artists to do pop-up concerts outdoors at locations of their own choosing on porches, lawns, street corners, parking lots, and parks across the South Side of Chicago.  Although not formally permitted by the City of Chicago, Park District, or any other official entities, these guerilla-style events provided a much-needed cultural focal point for people who had been severely affected by the pandemic.   During that window of time, we managed to present roughly 45 outdoor concerts that gave artists the opportunity to actually perform live again, and to earn some income.  Perhaps the most meaningful moment of that time period for me was stage managing a concert in September 2020 by Ari Brown’s Quintet at the corner of 63rd and Cottage Grove in Chicago’s Woodlawn neighborhood.  Although this corner now feels somewhat barren, with just a few businesses on the southwest corner of the intersection, and a huge vacant lot where the band set up across the street, for decades it was a bustling area that was home to countless jazz clubs, hotels, and ballrooms.  Some of those included The Pershing Hotel/Lounge, Budland, The Cotton Club, The Crown Propeller Lounge, The Kitty Kat Club, McKie’s Disc Jockey Lounge, The Tivoli Theater, and The Trianon Ballroom.  Those were all within one block of that vacant lot. So for anyone familiar with the jazz history of Chicago, this intersection means something.

Ari’s concert almost finished after about 40 minutes when the small portable power station we had to power the amps, keyboard, and small PA ran out of juice, but the crowd of about 100 people spaced out across the field wouldn’t have it. “Come on Ari,” one woman in front yelled, “play us something more.” So Ari launched into a gorgeous solo piece that had the entire field shouting and cheering by the end. And the degree to which improvisation and music is wrapped into our sense of community, and our basic humanity, became so very clear. Friends and neighbors.