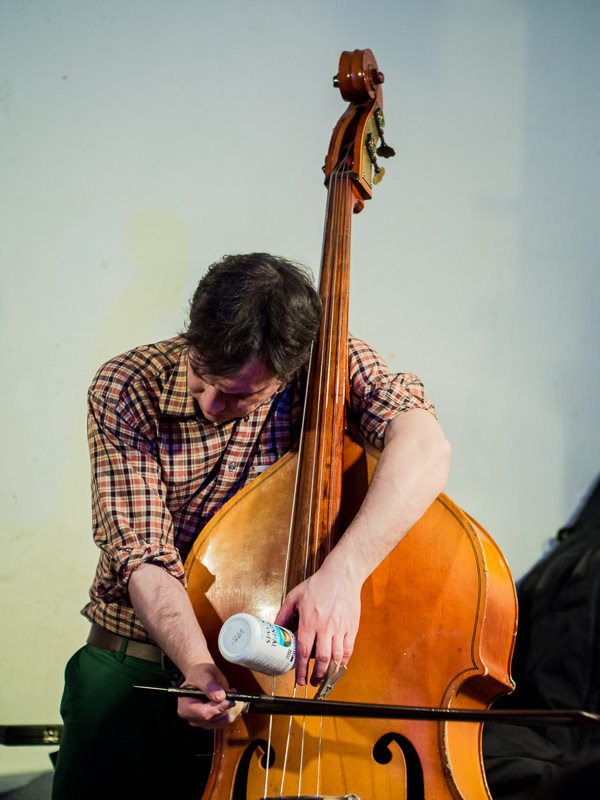 Sean Ali has emerged onto the New York scene over the past five years playing bass with a number of figures such as David Grollman, Carlo Costa, Flin van Hemmen, Lathan Hardy, and Pascal Niggenkemper. He prefers to work in collaborative contexts and has co-led many groups including Fester, Natura Morta, Hag, PascAli, Oracles, and LathanFlinAli. He also performs solo with bass, voice, and text. In addition to his contributions as a performer, Ali also co-curates the Ze Couch series with Pascal Niggenkemper, and is the co-founder of the Prom Night Records label.

This month there is a rare opportunity to see Natura Morta in three live performances!

Cisco Bradley: Where are you from? What have been the definitive musical experiences of your life?

Sean Ali: I’m from Dayton, OH originally, where I was born and lived until moving to NYC at the age of 19. It is difficult to say what my most definitive musical experiences are, because there are many. Studying the oud with Hamza El Din was major, because it opened me up to the world outside of non-Western music and showed that there are other approaches to improvisation that are non-harmonic. Otherwise, simply moving to NYC was a definitive experience: discovering Tonic and later the the Stone; meeting, hearing, and playing with improvisers who were interested in playing without predetermined forms; it was also here that I was introduced to and became interested in music that was “sound” based, as opposed to melodically, harmonically, or rhythmically based. This is primarily what I am concerned with now.

CB: Where do you look for inspiration in terms of the sounds you produce in the live setting?

SA: Everywhere. I am fascinated with sounds made in nature, industrial sounds, and the sounds of human speech. I practice reproducing these sounds on my bass (often with the use of extra objects), and then I explore ways in which they can be used musically, by which I mean ways in which they can be developed, become motivic even, and, hopefully emotional. Part of what I am trying to do is humanize the noises of the world that otherwise seem alienating. Living in NYC in the 21st century means living in a sea of noise pollution. I think most people just blot it out so that they can go about their day, but I am interested in reclaiming these noises and exploring their emotional content, finding their expressiveness, etc. There is a tradition of people who seek the spiritual in the profane. I consider myself one of these people.

CB: How did Natura Morta form and in your opinion, how has it evolved since then? What qualities and aesthetics do each of you bring to the collaborative trio?

SA: Natura Morta formed somewhat accidentally. I had heard both Frantz and Carlo separately and was intrigued by their playing, and they were intrigued by mine. I had played several trio sessions with Carlo and a various third, but nothing ever settled. Meanwhile, Frantz and I had been trying to play a duo session, but had scheduling issues. Finally, we played a session as a trio. At the time, I was just trying to kill the two proverbial birds with the one proverbial stone, but it turned out to be much more. We played some more sessions, and then booked a few shows here and there. It was obvious to all three of us that the sound was becoming increasingly cohesive. It’s the kind of trio where the whole feels greater than the individual players. Natura Morta is really one thing, even if Frantz, Carlo, and myself are different people.

Natura Morta has a certain musical vision, which we actually discuss and practice to create. So, this makes it different from many improvised music projects, as it evolves not only through playing, but through discussion and practice of particular ideas. We are very particular both about what we want the music to sound like and what we don’t want it to sound like. Also, because Frantz is based in Zurich, our opportunities for performances are limited. On the one hand, this is a drag, but on the other, it does give the trio a certain sense of agency to make the most of the time we have together when we have it. I think, in an indirect way, this also contributes to how the group has evolved over the years.

CB: When did LathanFlinAli first form? How did you get to know Lathan Hardy and Flin van Hemmen? That group has a diffuse set of influences and ideas. Could you talk about them?

SA: LathanFlinAli formed in 2008, making it the longest running among my still active projects. I met Flin a few years before LFA formed through a mutual friend of ours named Eliot Cardinaux, a pianist currently residing in Boston. I met Lathan also through a mutual friend named Alex Hampshire, a poet currently based in Philadelphia. I had played sessions with both Flin and Lathan separately. We played quartet sessions with a clarinetist named Jim Krull who currently lives in California. Eventually, we started playing trio sessions, then booking some shows. After awhile it gained momentum and formed it’s own sound identity.

Indeed, LFA has diffuse set of ideas and influences, as you put it. This is partially because we all have different backgrounds, but then that is usually the case for most groups. I think with LFA it’s more because of how old the project is. I think we started, whether consciously or not, as trying to put our stamp on the classic free-jazz trio: sax, bass, and drums. Over time, we’ve all explored and grown musically in various ways, and I think the result is that the group is less blatantly in the free jazz tradition. Flin and I have grown increasingly active in sound-based improvisation over the years, and that has definitely had an influence on our sound. Lathan too is involved in this, but he also brings a lot of lyricism with his simple melodies that draw deeply on the folk tradition.

CB: What about Pascal Niggenkemper inspired you to form a duo? What is next for bass duets?

SA: Well, I’ve always loved Pascal’s playing. The first time I heard him and met was at Cornelia St Cafe. LFA shared a bill with Minerva, Carlo Costa’s trio with J.P. Schlegelmilch and Pascal Niggenkemper. But I think it was still some time before we finally played. We were both invited to a session with Jean-Brice Godet, Frantz Loriot, and Yukari. I was already doing stuff with bass preparations, but to my surprise, so was he. I contacted him soon after and proposed we try a duo only using prepared basses. We were already interested in doing this anyway, and it was also a way to explore new territory not really explored by other bass duos. So, I guess what inspired me about Pascal was his enthusiasm to really explore this idea.

I couldn’t say what is next for bass duets in general. As for PascAli specifically, we have recorded a second album, which is awaiting release. Our first album, Suspicious Activity, is a presentation of vignettes, so to speak. The emphasis was on the variety of the sounds, so all the pieces are short. I kind of think of that album as a similar experience to eating dim sum. Our next thing, however, will feature two long tracks that will intensely explore one sound. The first album was about breadth, and this one will be about depth. It is difficult to say definitively what the “next step” is, but I think this gives an idea, hopefully.

CB: When did you first begin working with David Grollman? What is the concept behind Fester?

SA: I first worked with David in Valerie Kuehne’s project, Dream Zoo. However, it was all written stuff, and since David and I are primarily improvisers, we met up to play a duo session. The music was great from the first session, and so we just kept playing sessions and eventually started performing. If there is a concept behind Fester, it is something that formed as a result of playing and not the other way around. Perhaps one underlying concept is physicality. The name itself describes a physical process, and I think it’s safe to describe both of our playing in this duo as earthy/bodily as opposed to ethereal/cerebral. Perhaps another concept is a tendency to create juxtapositions of innocence and, shall I say, “not so innocent.” This is especially the case when we do text pieces. The text we use is almost always nursery rhymes and children’s poems. Through both our playing and tones of voice, we highlight the more sinister and/or sexual undertones that are hidden the words. The underlying themes of death and sexuality unseen yet present in the midst of innocence is a “classic” Fester theme. Unfortunately, it isn’t captured on our album. You have to come to the live shows for that.

CB: Any chance Hag will be reunited?

SA: Hag is by no means not united. It’s simply that Brad [Henkel] lives in Cologne now. He does manage to visit NY once or twice a year, and we always try to play as many shows as possible when he comes to town. So, although we’re separated geographically, musically and personally, we’re still close, and I still consider the group active, if not dormant for much of the year. In fact, we have a new album planned with special guest Dan Peck on tuba. I would expect to see a release by the end of winter, if not sooner.

CB: What solo projects have you been working on lately?

SA: My solo performances have taken on a variety of forms. Initially, I was performing through-composed pieces I had written. Then, I went through a stage where I did completely improvised sets. Feeling a little unsatisfied with both, and also wanting to incorporate more spoken-word (I write quite a bit, more than I compose music actually), I began doing text pieces that were structured yet still featured substantial improvisation. I did several performances of these pieces before moving on to my next and most current stage, which are the tape pieces. The tape pieces are prerecorded sound collages that consist mostly of field recordings, text recitation, live acoustic noises, and bits of actual instrument playing. When I perform them, I simply let one entire side of a tape run while I improvise on the bass and sometimes talk as well. I use tape specifically because of its poor audio quality. I am fascinated by the way the sounds fade in and out of clarity and distinctness and the way that I can blend the bass sounds with it. For me it is akin to the way one’s memories can grow vague over time yet still maintain something essentially distinct. That combined with its collage quality conveys the impression of dreams, or at least of the dreams that I have. Solo sets are by nature introverted, so this is perhaps another way of going into that, creating a tapestry of decaying memories and dreams as a kind of subconscious backdrop to the active side of what I am doing in real time on the bass.