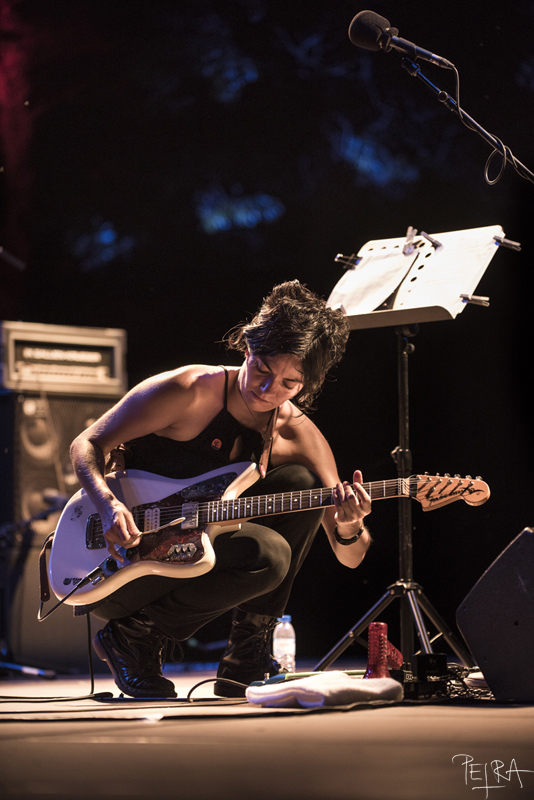 Guitarist/composer Ava Mendoza has a residency at the Stone this coming week, October 25-30, one of the most anticipated events of the Fall season. Having moved to New York from the Bay Area in 2014, Mendoza has had a major impact on the improvised music scene here via a sound that is all her own. I had the opportunity to sit down with Ava to discuss the week of music she is presenting. An interview follows below.

Schedule of Ava Mendoza’s Residency at the Stone

8 pm- Ava Mendoza (guitar, electronics, sing)
I’ve been playing solo on and off for a decade, and after touring quite a bit this past summer am feeling pretty inspired by it. Fuzzed out fingerstyle songs, minimal vocals, elements of noise, damaged blues.

10 pm- Quintet with Peter Evans (trumpet) Ava Mendoza (guitar) Matt Mitchell (Prophet 12 synth) Devin Hoff (bass) Mike Pride (drums, percussion)
I’d been wanting to put this group together for a while and this was a good chance. We’re playing one long-ish piece I wrote for the ensemble— kind of a framework or skeleton for improvising on. It’s hard for me to describe it, but I will say that it’s influenced by Sun Ra, Conlon Nancarrow, and the outmost reaches of instrumental P Funk.

10 pm- Pavone/Mendoza Duo
Jessica Pavone (viola) Ava Mendoza (guitar)
Pavone and I have played duo together a handful for times over the last six months, writing together and arranging old tunes of each of ours. It’s always doomy, folky, and a good time.

8 pm- Bran(…)pos + Mendoza Duo
Bran(…)pos (vox, electronics) Ava Mendoza (vox, guitar)
I’m doing a duo with my friend Bran(…)pos who is a great noise guy/vocalist from San Francisco. He’s also a professional sound designer for theater. We’ve played together on our own terms, but have also done sound/music for theater as a team. Bran is one of a kind and doesn’t come out here often enough… Don’t miss a pretty rare chance to see him on this coast.

10 pm – Unnatural Ways
Ava Mendoza (guitar, sing) Tim Dahl (bass) Sam Ospovat (drums)
UW playing our bread and butter; if you want to see us in our regular three-piece rock band form this is the set to catch. About our most recent record, We Aliens: “cutting edge guitar playing is front and center here in nine hard-edged and steely blues-tinged rock instrumentals. With a twisted sensibility and plenty of shredding, psychedelic effects and surprises, the music features Tim Dahl (Child Abuse, Lydia Lunch Retrovirus, Pulverize the Sound) on bass and Sam Ospovat (Enablers, Beep, Naytronix) on drums. Unnatural Ways is a tight, exciting new band out of the burgeoning Brooklyn scene.” – Tzadik

Cisco Bradley: Your residency at the Stone is certainly one of the highlights of the October calendar in NYC. Do you have specific goals in mind in presenting certain groups or is the aim to just present your latest music?

Ava Mendoza: I think of it as a snapshot of where I’m at right now musically. It’s a good chance for me to showcase where my longterm projects are at, and also to put together some new groups I’ve been itching to try. The longest standing groups are Unnatural Ways, me solo, Chaser, and QUOK. I’ve also been collaborating with John Dikeman in different situations for many years. There are others that are pretty new— duo with Jessica Pavone, the quintet with Peter Evans, Matt Nelson, Devin Hoff, Mike Pride. Some other groups are in between— in the case of the quartet with Matt Nelson, Jamaaladeen Tacuma, and Ryan Sawyer they’re all people I’ve played with over the years in separate settings, but this residency gives me a chance to bring them together for a set.

CB: You are fresh off of a solo tour in August. What did you learn through that experience and how has your solo work evolved recently?

AM: I’ve been playing solo on and off for the last 10 years and I feel like I’m at a good point with it right now, mostly from digging into it so much over this past summer. Solo’s always a balancing act between different elements for me; I play guitar, I use some prerecorded tracks— mostly sonic/textural—, and I sing. Getting to do it night after night so much made me sort of understand the alchemy a little better and I’m looking forward to writing some new stuff soon.

CB: What new music for Unnatural Ways will you be featuring?

AM: We had a record come out on Tzadik a couple of months ago so we’ll be playing lots of music from that in our set as a three-piece. Here it is:
http://www.tzadik.com/index.php?catalog=7814

CB: On two different occasions, you are featuring guest artists with Unnatural Ways (saxophonist John Dikeman on Oct 26 and percussionist/electronicist Levy Lorenzo on Oct 29). Is this a way to workshop possible new directions for the band? What history do you have performing with both players?

AM: John is a friend of mine from high school actually haha… we met at Interlochen in northern Michigan in the late ‘90s. We represented 2/3 of the 3 people there interested in weird/improvised music! We’ve kept in touch and played together in many different situations on and off over the years since then. About 6 months ago at the Bimhuis in Amsterdam Unnatural Ways did a quartet set with him. That was fun, so we decided to do it again here.

I saw Levy play for the first time a couple years ago. After that I asked him to do a set with UW at JACK and it was a pleasure having him sit in. What he does in terms of amplified percussion + electronics adds a whole new dimension to our sound. Some of the music that I write for that band is mostly about rhythm and timbre— less song-y than the things we play as a trio. So that kind of stuff works really well with what Levy brings.