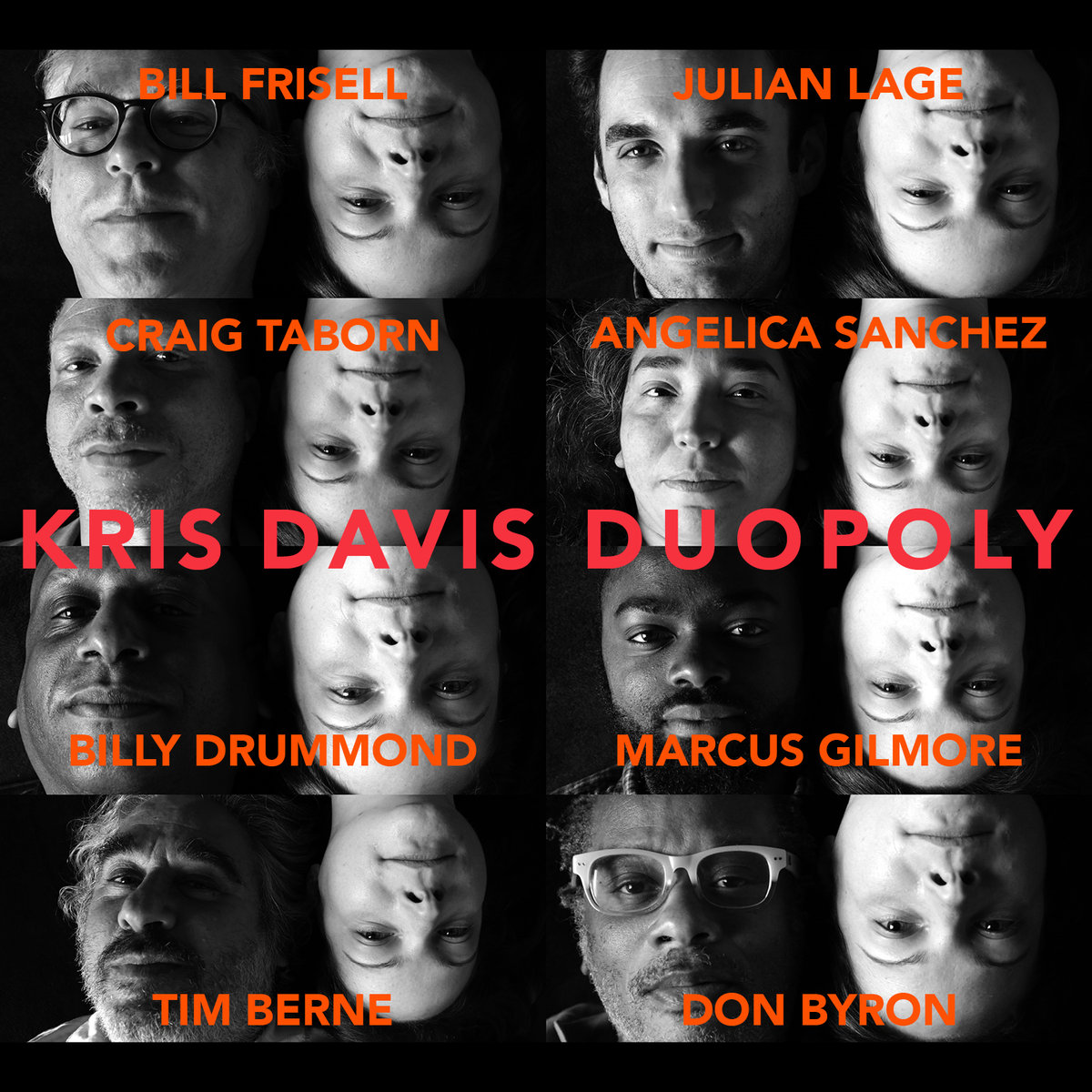 Pianist Kris Davis appropriately named her 2016 release Duopoly, a series of duets featuring heavy-hitting improvisers, including Bill Frisell and Julian Lage (guitars), Craig Taborn and Angelica Sanchez (piano), Billy Drummond and Marcus Gilmore (drums/percussion), Tim Berne (alto saxophone), and Don Byron (clarinet). Each musician plays two duets with Davis on the album, and the finished project is a cohesive, melodic, festival of sounds and textures. Each duo performs one composed piece and one freely improvised piece, with the composed pieces filling the first half of the album and the freely improvised pieces are featured on the second half.

What I found most intriguing about this album overall was the interplay of the two instruments in every duet formation. Every ensemble sounded distinct and different, but under no circumstances did I ever hear one instrument staying in the foreground or playing over the other. In some duets I have heard, particularly in improvised music, one instrument will tend to dominate the other, either because of the fact that they’re playing more notes or melodic material, or because of the timbre of the instruments. I thought it was exceptional in this album that the instruments were featured equally in each track, really creating this “Duopoly” like the title says.

My favorite moment on the album was the fifth track, a wonderfully minimalistic take on Thelonius Monk’s “Eronel” featuring Davis with Billy Drummond. Davis’ interpretation of the melody is refreshing and fairly straight ahead with phrasing that highlights both players in a gentle, back-and-forth way, with Drummond filling in the rests left by Davis. Her light touch on the piano, particularly in the upper register, is reminiscent of Drummond’s hits on ride cymbal, and I found that the two timbres blended together more and more the longer I listened.

Searching for a track or moment to rank in second place was a challenge, as there were many other highlights on the album. Davis’ beautiful improvised duet with Julian Lage (“Julian”, no. 15) on acoustic guitar is another favorite, with the textures of the two instruments blending almost seamlessly before being punctuated by chords in the piano and a plucked melody in the guitar, a thematic ride that sounds like several very short pieces rolled into one. The fourth track, “Beneath the Leaves” with fellow pianist Angelica Sanchez, was one I needed to listen to multiple times to really understand what each player was saying. The melodies that both pianists were playing complemented one another nicely, but I found that my ear would often get carried away by one melody, leaving the other behind! The true beauty I found is in how the melodies fit together in somewhat unexpected ways, and that sentiment summarizes how I feel about the album over all. Each piece in “Duopoly” took one great melody and put it with another great melody to create something exceptionally interesting and creative.