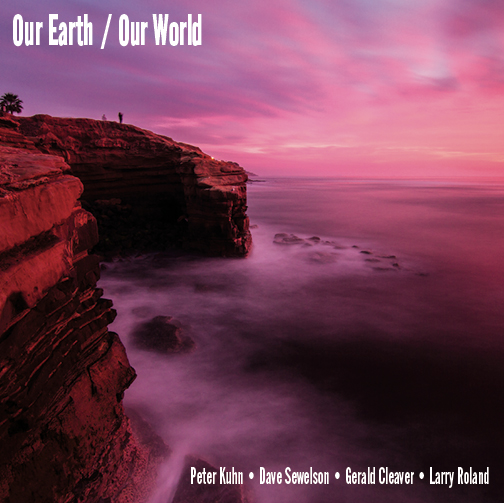 Our Earth / Our World (pfMentum)

This performance happened as part of the Arts For Art. The musicians on this record date are ones I haven’t seen except for saxophonist Dave Sewelson and drummer Gerald Cleaver. Dave and I played opposite each other at an event at Arts For Art.

Here’s an overview of this live recorded performance. Of particular note was Gerald Cleaver. He really took the reins and directed the band with his drumming. The music is quite exploratory, probing every nook and cranny in the moment.

Track one, Our Earth, starts off with lots of fire and solar flares. The group maintains this insanity throughout most of the song. Everyone shares the load. Gerald’s standout drumming plus his hard driving energy, keeps the group locked into this fiery trajectory during the first eighteen minutes. The horns join together, playing melodious chords for the remainder of this song.

Track two, Our World, Gerald begins with percussive pulses that morph into recognizable African rhythms. What starts as abstract rhythmic expressions gives rise to specific forms that act as a magnet, pulling Larry Roland into playing the strong bass lines that follows. The template becomes very much like the unity that Elvin Jones and Jimmy Garrison had. This aspect influences the horn players as they take their solos.

Track three, It Matters, Larry Roland takes the center stage setting up the next direction. This entire song feels like a venture into experimental music.  Larry’s varying nuances is joined by both Peter (on clarinet) and Dave (on baritone) filling in the blanks. Gerald’s mood making gentle rolls on the toms adds to this brewing storm. This song makes the final closing statements by the musicians. Given the layout of this show, the transitions from one phase to another, this is a logical conclusion for this set.

This is one of the best shows I’ve heard from Arts For Art. Do head for the nearest store and pick up Our Earth / Our World. You will be impressed with the music.