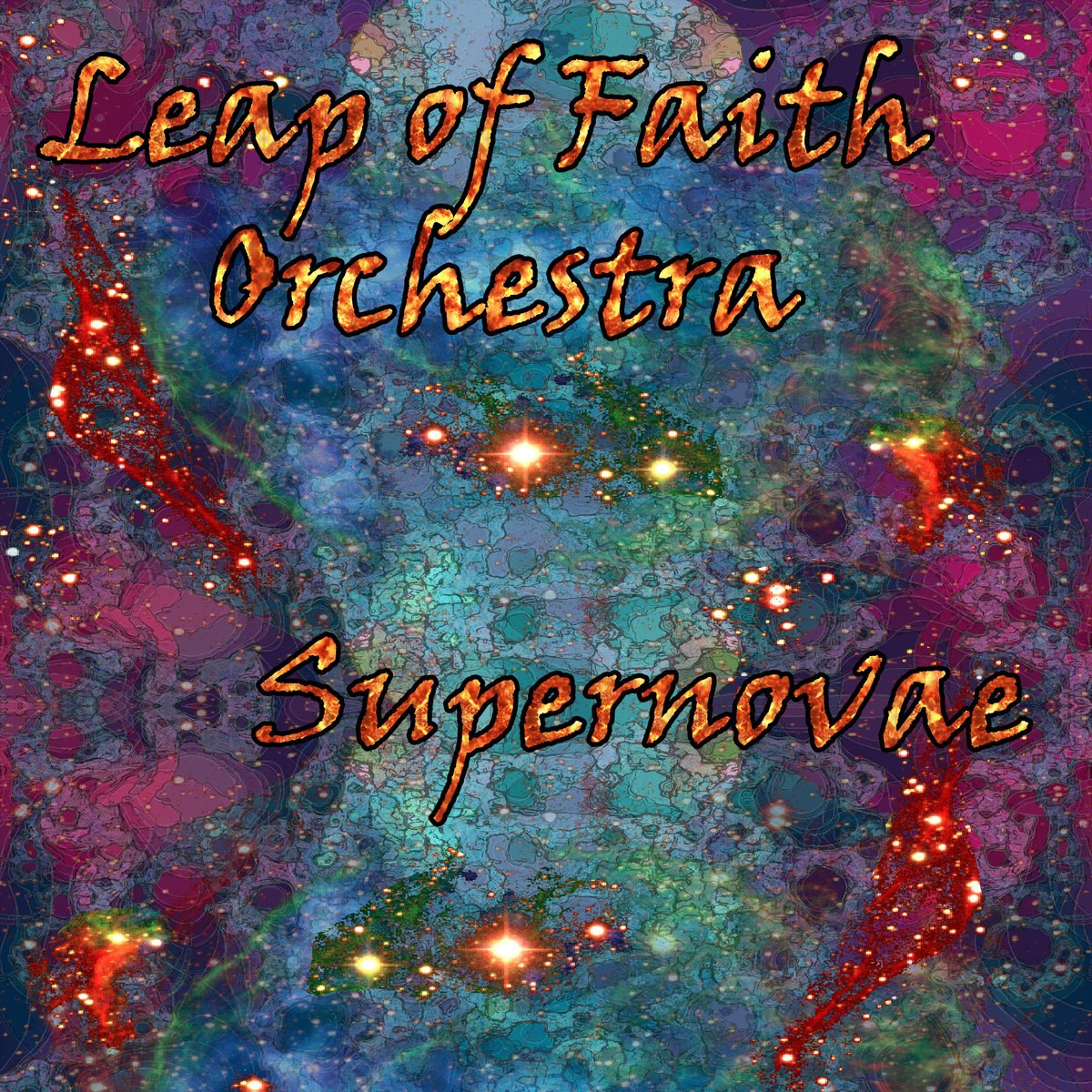 “The full orchestra (with all 5 sub-units) had its first performance on June 4, where we played my composition, The Expanding Universe. The composition does not specify notated melodic or rhythmic information, just durations (by time indices) and English language descriptions of the overall sonority desired. This allows me to plan very detailed compositional events without the need for extended rehearsal. To prepare for this concert we did lots of sessions and performances with each of the sub-units and with each of the other sub-units combined with core Leap of Faith.” — Dave Peck “PEK”

Leap of Faith Orchestra is one of the most ambitious projects within avant-garde jazz approaching work such as that of Marshall Allen and the Sun Ra Arkestra in range and scope. As the track begins, everyone is playing freely. The bass lines are well thought out and executed by Brendan Higgens and Tony Leva reminiscent of Frantz Loriot’s Systematic Distortion Orchestra. Gradually as this supernova develops, more instrumentalists join the fray, heating things up considerably. During this somewhat quiet interlude, from out of nowhere, the percussion section makes its present known with loud timpani drums in the background. The drums are joined by the horn players, mostly clarinets, trombones, and tubas. There is so much movement happening, the music can only be consumed as a whole, rather than focusing on subsections or individuals. This section gives rise to a space for the piano to shine. Peter Cassino is joined shortly by one of the musicians on saxophone and guitar.

Further along, the orchestra appears to be playing melodic lines while others solo at length. The music is always moving forward via the many sections in the orchestra. Sometimes, it is the trumpets, while at other times, it is the saxophones leading the action. The music drifts along producing melodious sounds from the entire unit. This may vary as the percussion section does unorthodox rhythms. The music is both free and very structured simultaneously. This piece is less about melody, but meant to be heard, as an experience. This music will take listeners to different places; a mental journey of the imagination, as the music opens the door to other dimensions.

The use of the timpani is quite effective with the piano moving in and out, supporting the horn player’s solo. I can hear Forbes taking off, leading the orchestra. His trumpet flurries are a welcome addition to the mayhem. They produce a definitive contrast to the proceedings on deck. The music becomes very surreal as the music moves into a parallel universe. This section reminds me of Cecil Taylor’s large ensemble when he did his performance at Carnegie Hall in 1974. Once this part comes to an end, the violins are left playing by themselves. They are joined by the sound of a gong and the timpani. The timpani player immediately starts bending the notes as he strikes each timpani, letting the elongated sounds linger throughout the room.

As this composition progresses, it would have been perfect for use on The Twilight Zone. It has the mysterious quality that Rod Sterling and his staff of writers, featured in many of the episodes. This would fit right in with the somber pace, the show projected into the living rooms of audiences, every Friday night. If you’re not familiar with the works of David Peck’s Leap of Faith Orchestra, do check out this album. It’s a good place to start. Supernovae is available on bandcamp.