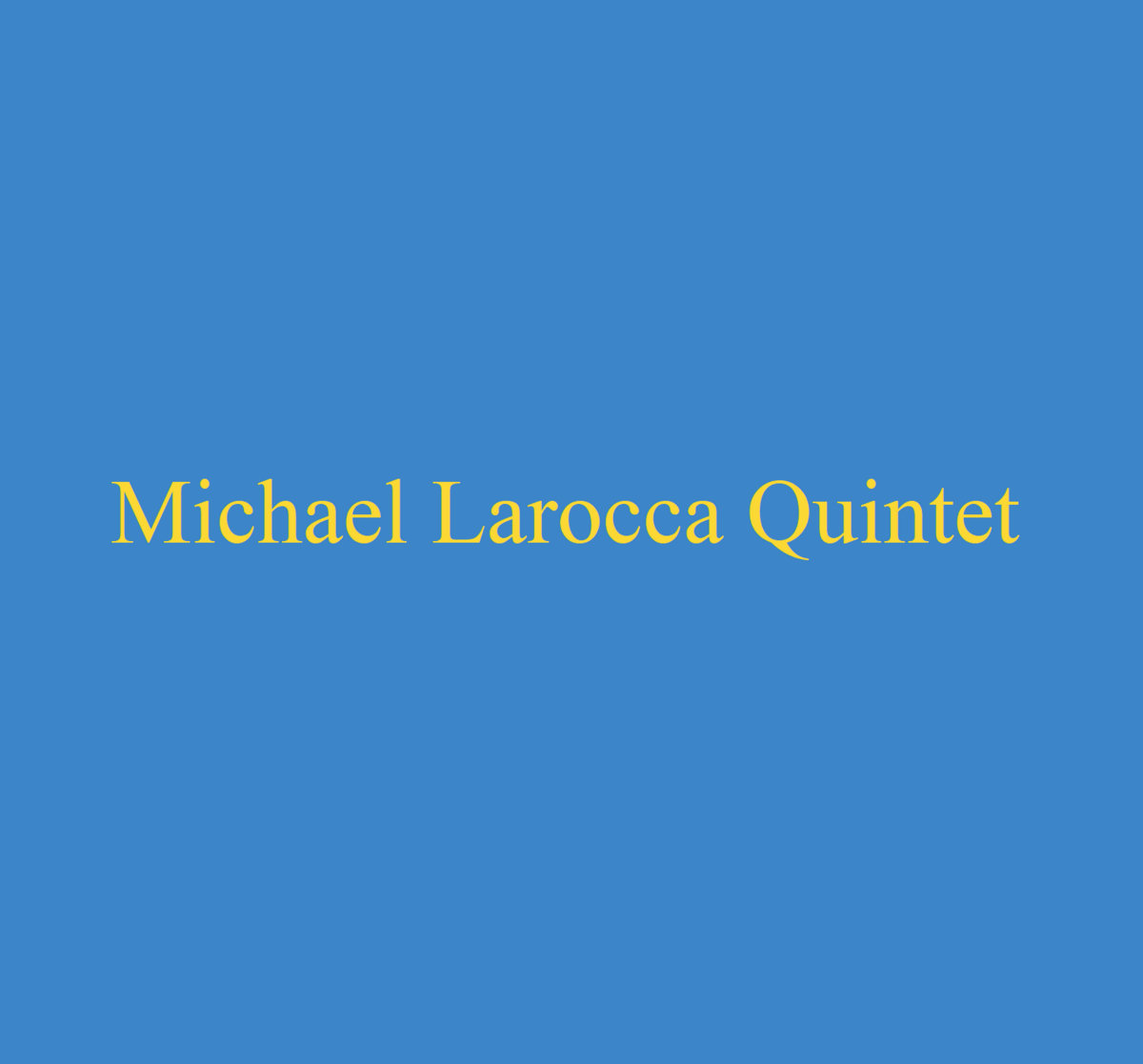 Minimal packaging design on a CD can mean one of two things. It could grace a demo or a bootleg – something unfinished, low in quality, not ready for public release. Alternatively it can be an artistic statement – that the music speaks for itself and doesn’t need much framing to enhance its own powerful statement. Michael Larocca’s self-titled quintet album, with its cover simply the title in yellow on a blue background, is decidedly the latter. It’s a cathartic free-jazz romp from an exciting young band, imbued with a wholesome dose of absurd humor.

Released in December 2021, Michael Larocca Quintet is the second album on the Connecticut-based drummer’s own label, Guardrail Recordings. It features Kaelen Ghandhi on tenor and soprano saxophones, Jonathan Milberger on tenor and alto saxophones, Aaron Rubinstein on electric guitar, and Caleb Duval on acoustic and electric basses. Larocca, Ghandhi, and Milberger regularly collaborate as a trio. The compositions on this album are Larocca’s, besides the collectively improvised “Communal Ice Cream.”

This is a big album. It has only four tracks, but each is over fifteen minutes long – a welcome contrast to that late-oughts/teens trend of filling albums with short, compact songs. The band has such a vast sonic palette that none of the pieces feel too long. The first and longest track is a suite of three composed sections (“One Flight Up, One Flight Down”; “AAA [Triple A]”; and “Lament”) separated by improvised interludes. These composed sections have the full ensemble playing single notes together at various lengths, ranges, and volumes, punctuated by silence. The suspense in these sections is riveting as patterns appear and are suddenly broken. In the interludes, Ghandhi’s tenor solo stands out for his impressive arsenal of siren tones, double-tongued rattles, and curious guttural grunts. But to me Duval’s DI-heavy acoustic bass – particularly the goofy, rubbery timbre of his bowing – provides more edginess than the rawest skronks from the saxophones. He takes the lead in the duo improvisation with Rubinstein, who treads lightly around him with delicate blips and scrapes.

On “5×3” the quintet is overdubbed thrice, with one track of each player on the left, middle, and right. This is an epic piece of directed, durational improvisation – a showcase for the band’s massive variety of soundscapes and moods. The players improvise together both within and across their three incarnations, often in trios with themselves. Sounds are layered, crossfaded, and sometimes abruptly contrasted. Recognizable jazz elements (swing grooves, blues vocabulary) often appear in alienated isolation. The middle section, where the textures are splintered into juxtaposed shards and blurts, is a beautiful bit of free jazz comedy.

Though the third track, “Communal Ice Cream,” is improvised without a preconceived structure, there is certainly a sense of form as the quintet arranges itself into twos and threes just as purposefully as on the other tracks. This one again explores a panoply of sonic realms, from skronky barrages to fragmented picking. Duval’s bowing is especially zany in this one, a worthy foil for Ghandhi’s snorts and outgribings. This track ends at a high energy, rare and refreshing for an extended free improvisation by this size of ensemble.

“Particle Smasher” begins with a full-ensemble barrage at the same peak of energy where “Communal Ice Cream” left off. This final piece has the most “traditional” form, with a swirly nugget of theme bracketing a fiery set of solos. Everyone shreds here, Duval on electric bass swapping out the arco whimsy for a punky griminess. Larocca’s solo, really their only one on the album, showcases their jazz chops – they are a formidable straightahead jazz drummer though they rarely show that side of their playing on this album.

The one criticism I have about this album is the similarity of the two saxophonists’ extended-technique vocabulary. Ghandhi’s tenor double-tonguing in “Suite” is very close to Milberger’s on alto in “Communal Ice Cream,” and their tenor battle later in “Suite” sees them matched growl for growl. I feel like they could benefit from exploring more individual ways to sustain their high energy level. That said, especially as a fellow saxophonist, what they do is certainly fun to listen to.

The quintet has performed a few times, mostly in Connecticut but also once in Brooklyn. I’m looking forward to catching them live sometime in the near future. In my opinion, this band has plenty enough potential for a second album – I expect this not too long from now!