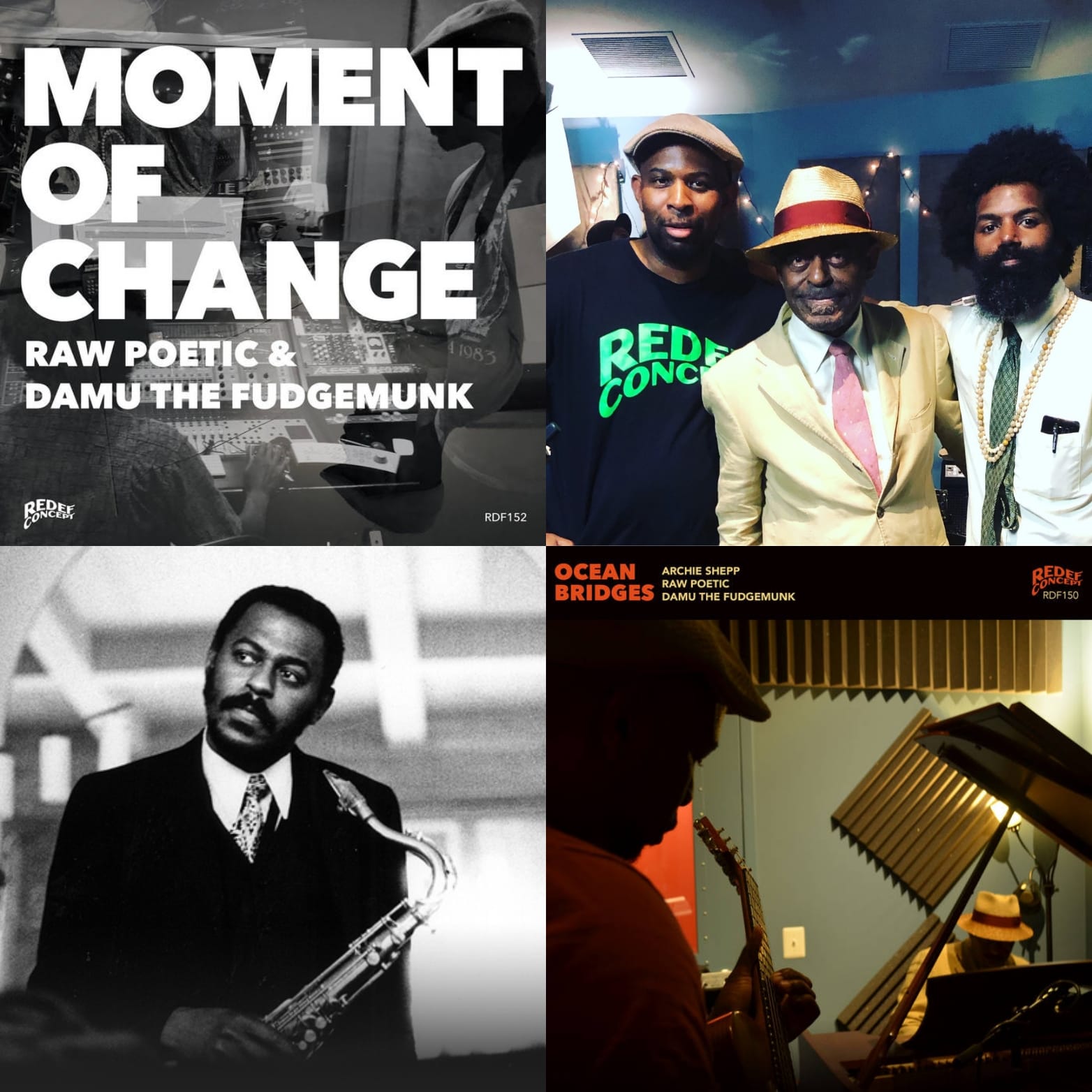 “The primary duty of an entertainer is to entertain. So he thinks first and foremost of making the audience happy. And in fact, the other thing about being honest to himself doesn’t have to enter into it at all. But I think when we enter into the realm of true folk music – which I think is the basis of so-called art music – then the performer has a duty to himself, to be honest to self as well as to the people he is performing for.” — Archie Shepp (Coda Magazine, 1980)

It has been a big-trying-ass-year for Black folk, and what we are experiencing isn’t new . . . just recirculated. In many ways, it feels like a terrible time to write record reviews, but I love all of these brothers involved and feel that the beauty in what they have shared with us is essential.

I’d been familiar with the name Damu the Fudgemunk (Earl Davis) for years. His numerous singles and LPs have been circulating around the internet for quite some time. Yet, I had been guilty of not sitting myself down and spending time with his work until earlier this year. After catching myself up on some of his instrumental albums I put on the appropriately title Moment of Change (Redefinition, 2020). It was the first of his records featuring an emcee I decided to listen to. Maybe the loneliness of the pandemic opened me up to new voices, or perhaps I was dying for a loving hug from another Black man that understood my experiences, but the vocalist Raw Poetic (Jason Moore) gave me a breath I’ve been struggling to catch for 39 years.

Check out Moment of Change on Bandcamp.

In 2008 I came across the brief game-changing Stop Smiling Magazine. When flipping through Issue 34 (The Jazz Issue), I came across many heroes of mine within its pages. Eric Dolphy, Bobby Hutcherson, Ornette Coleman, Joe Chambers, and Ron Carter are all featured in the journal. Also inside was a small, but powerful section by Chicago renaissance man Jim Dempsey.

Cover Versions: The Art of the Jazz LP is an interesting analysis of American visual artists and “Jazz” record covers (4 of the 7 images displayed were never released). One of the unreleased was an LP by saxophonist and playwright Archie Shepp. While the text on the image read Archie Shepp: Dedicated to James Brown, the explanatory text read Archie Shepp Plays James Brown (ABC/ Impulse! Records, c. 1969). And there is a difference there. While Shepp had been known to play tunes by Antonio Carlos Jobim, Duke Ellington, and of course his friend John Coltrane, recordings of him covering The Godfather of Soul didn’t publicly exist. My theory is that later albums (where producer Ed Michael compiled then-current recordings with past funkier outings produced and shelved by Bob Thiele) feature some of the material that would’ve made up this record.

The point is, this never-before-seen image of Shepp’s wanting to dedicate to and perform Brown’s music more closely connects him to what would’ve been the beginning of the era of Hip Hop. The Soul Brother No. 1 clearly is the foundation of what most of us of that generation grew up on (rhythmically speaking), yet Shepp’s name is typically kept in very white circles in reference to his association with the avant-garde. But, like Miles Davis after him (specifically thinking about On The Corner), it is clear that he wanted to pull his people closer into the musical conversations he was facilitating around Black Liberation, whether in churches, on dance floors, or bedrooms. He got to that musical place shortly after this, but I can’t help but wonder about his intention about tapping into Brown’s catalog/spirit. Crying of and with his people indeed.

Well, 2020 gives us the opportunity to hear another side of Archie Shepp. The importance of Ocean Bridges (Redefinition, 2020) cannot be understated. I’ve long bitched and complained about the lack of intergenerational conversation between Black elders and the current musical folk. And while ATCQ, De La, Yasiin Bey, Digable Planets, etc. have all collaborated with legends of previous decades, most of the current wave have solely relied on samples or their peers to provide backdrops for today’s messages (and there plenty examples of great outcomes of such).

As the story goes, Raw Poetic reached out to his Uncle Archie to collaborate on a project. The elder agreed that now was the proper time. Damu served as the musical director. A crew of talented musicians was ensembled. What ensued was a beautiful hour-long dialogue between heavy hitters of like mind and spirit.

The album opens up with a riff that replays throughout as “Professor Shepp’s Agenda” (7 in total). Raw Poetic tells a story on “A Valuable Lesson” of being a young emcee explaining there’s space for every part of the music. It then jumps straight into the first single “Learning to Breathe”, which has an amazing video and sets up the mood for the LP. By the time “Tulips” (the second single) ends it is clear that these tunes were well thought out, but not too much as each song leaves plenty of breathing room between the vocals and music.

Our octet plays together well. Along with Shepp on tenor sax is Jamal Moore who’s contribution contrasts enough with Uncle Archie’s that the two are never mistaken. Aaron Gause and Pat Fritz add a perfect amount of accent on keys and guitar. Bashi Rose and Damu move around on drums and percussion (the latter on backing vocals, vibraphone, and turntables as well). And the group is rounded out by the ubiquitous Luke Stewart on upright and electric basses.

I have a soft spot in my heart for the relationship song. Whether “Electric Relaxation” (1993) or “The Hypnotic” (1996), these songs leave lasting impressions on Black hearts and minds and this group’s “Moving Maps” is no different. After several listens my ears automatically attach it to “No Valentines” (from Moment of Change), but they tell (I think) two completely different stories. The upbeat tempo and method of storytelling are pretty infectious. By the time I’m finished dancing to it, a dope bass-heavy interlude is welcomed.

Keys and guitar open up “12 Hour Parking”, with sax, vibes, and drums falling in right behind. The sunny groove is dope and highlights Raw Poetic’s beautiful voice. One of the things I really dig about this project is the looseness of the recordings, but still having followable verse and chorus structures. Someplace between The UMC’s Fruits of Nature (1991) and The Brand New Heavies’ Heavy Rhyme Experience Vol. 1 (1992), Ocean Bridges is a moving testament to Black Liberation Music of days gone and the future to come. The involvement of Shepp with his family and friends could not have come at a better time. The pandemic has kept the young from the elders and loved ones far out of physical reach. But between, “fuck you, shoutout to my moms” (“Learning to Breath”) and “we are the dreams you shied away” (“Searching Souls”), it reassures me that I am not alone in this. We just gotta find new ways to communicate as best we know, leaving room for dialogue while we have the energy and precious time to do so.

Check out Ocean Bridges on Bandcamp.