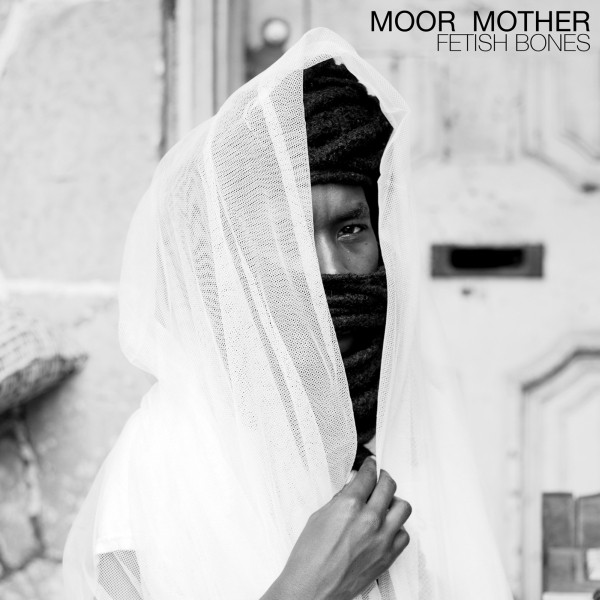 Just a handful of times in any given generation, there is a record that screams out with such overwhelming force, such a level of unwavering vitality, a product of the organic creative process made necessary by the social context of the artistry, that it demands we all stop what we are doing and give it our full attention. Fetish Bones is such a record. Cutting through the muddled patterns of convention that fill the American musical landscape today, Moor Mother’s debut on Don Giovanni records is without any doubt one of the most innovative and important records of 2016 and is certain to have a deep impact.

This solo recording by Philadelphia’s Moor Mother (Camae Ayewa) puts all of her myriad talents on full display. Front and center is her work as a revolutionary poet with biting lyrics that click with the precise diction of a rapper, while being presented in a spoken word format in which one finds traces of an old gospel preacher. Moor Mother’s work as a photographer is evident in the vivid images that she portrays through her words. The music accompanying her poetry then is a combination of electronics and selective sampling drawn from a wide range of sources.

Fetish Bones is a call for revolution on many fronts. Moor Mother states this clearly: “I am speaking about how we revolt but continue to hold our art and create in the same models of the corporate structures that we fight against. I am speaking about the masks we wear, the short cuts we take to understanding, healing, ritual and magic. I am speaking about the prisons we create for ourselves and the trauma of state sponsored brutality, poverty and incarceration.” She opens the record with the track that is in many way’s the album’s masterpiece, “Creation Myth.” The song is a time-traveling foray through a series of race riots from 1866 to the present, though which she is bloodied, loses her limbs, and barely survives to arrive in Ferguson, Missouri, while recounting all of the fallen who did not survive. This poem is a call to witness, but also a call to action, and one that demands dignity for Black bodies. She states defiantly in the middle of the piece, “I resist to being both the survivor and the victim, but I know the reality.” Then, on “Deadbeat Protest” the central phrase is, “you can see my dead body at the protest … trying to save my Black life.” Another track serves as a memorial to Natasha McKenna, the thirty-seven year old woman tasered to death by police in Fairfax County, Virginia, in 2015. Moor Mother crafts lyrics throughout that speak of class war, resistance to violence, and day-to-day oppression. One of the record’s great successes is the atmosphere that it creates: there is a suppressed feel, like a weight is placed upon the sounds themselves and she is pushing upwards and outwards against it.

Moor Mother’s deep understanding of who she is, where she comes from, and her place in her own history are what make this record capable of shouting down the mountains. “The day the erasure happen, the day we started to reflect the reality of the existence of now. Stuck in the past or stuck in advertisements of the past. Where memory is convoluted in self-hatred and consumerism. Having no idea about humanity, many are trying to identify how to become a decent person in a state of corruption, racism and capitalism. We are cut off from our roots and at this point we flock to museums and universities to see ourselves, to see our ancestral artifacts.” Such a skeletal life is not for Moor Mother, who carries a distinct idea of her past and its meaning, relating this through tales of lived experience. Her poetic retelling of personal experience, such as her ode to Washington Park, the community where she grew up in Aberdeen, Maryland, allows her to move from the personal to the communal. These stories capture the raw pulse of the streets, neighborhoods, homes, churches, and and other social spaces she has inhabited as she speaks of violence, injustice, and the day-to-day indignities that accompany being African American in America in 2016. She also links directly to a long history with pieces like “Chain Gang Quantum Blues,” that seem, in many ways, to make time not only a forward progression, but a dimension which is fluid, malleable, and one that can be harnessed for the purposes of liberation.

In many ways, Moor Mother is engaging in a sort of auto-didactic practice of self-realization through examination of personal and collective memory. She writes, “I am capturing the grunts, groans and wails of the African American History of Rebellion for an awakening of meridians that run through the body, earth, and space. I am highlighting folk realities, beyond the inner city. A sonic journey through Indigenous landscapes. My approach to this album is in the tradition of those that make out of nothing.” Or, as she states in “Creation Myth,” like “how mama would make biscuits out of nothing.” Her words ring with a striking commentary reminiscent of Allen Ginsburg’s “Howl” or Joseph Jarman’s “Non-Cognitive Aspects of the City,” bearing witness to a reality that might otherwise be streaming by like a runaway train, except for those who bear it witness and who even stand in defiance of it. To counter this, Moor Mother forges alternate trajectories, giving voice to subaltern memories and images, bringing them to fruition through the course of the thirteen tracks.

Fetish Bones possesses both direct and indirect connections to jazz. For one, Moor Mother lists free jazz as a primary influence. Much of the sampling in the music is drawn from free jazz. When I interviewed her in July, she had this to say about the power of free jazz: “Free jazz to me is the beginning and its expansion. It is the chants on top of foot stomps and hand claps. It is the scripture over top of the choir.  Free Jazz is what’s needed to travel.  It is the sound of protest, of peace and of sorrow all at the same time.  You cannot go to war without a drum, you cannot time travel, seek outer and inner dimensions without free jazz. Alice Coltrane music is a liberation technology, Sun Ra music is a liberation technology.  That’s why I love Amiri Baraka so much. He put jazz into the poetry because if you need to go to a certain place that is the only way.” Fetish Bones feels like a journey throughout, whether through multi-layered electronics and sampling that flows like a river, carrying the listener along, or whether it is the vivid stories and experiences that Moor Mother unfolds, taking the listener to other times and places.

While much of the record surges along on raw punk anger, it ends with the milder track, “Time Float,” a buoyant piece that gives the impression of new horizons. To heal, Moor Mother states, “you must first try to learn everything that has been done to you.” Only then can one move beyond it. This apparent optimism at the conclusion of the record reflects one of the goals she set out to accomplish in recording it: “Fetish Bones is a sonic act of protection and redemption. Every sound is dedicated to the rememory of you expanding out into a multitude of freedoms.”