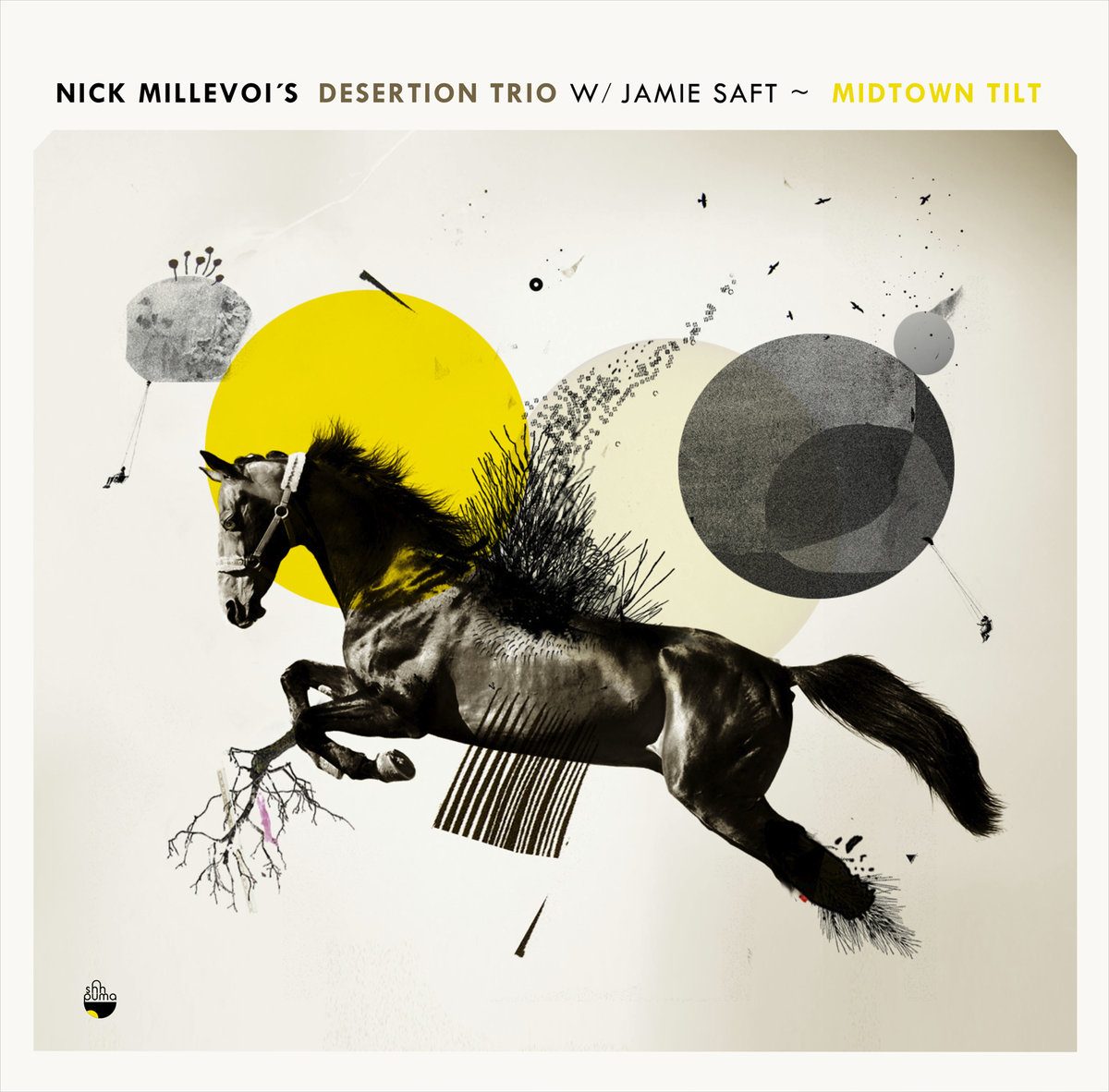 I enjoy eating breakfast and find it pretty necessary to have some sort of complimentary caffeinated beverage with the first meal of the day. The combination of the two is not something I can really explain well (I’m a music historian, not a taste buds expert). Usually, I reach for a few different fruits, maybe a bar, and the occasionally eggs with toast (off days only). Energy slowly builds while the rest of my morning continues. So when the listener approaches the Desertion Trio’s Midtown Tilt, they should be prepared to find healthy combinations heard in our daily activities that complement our taste naturally, all while having it delivered in an energetic fashion from start to finish.

The Trio, led by guitarist/ composer Nick Millevoi, supplies a cascade of influences and cadences throughout the album’s 42 minutes. The title track opens the album with chords stretching out a dust boot theme that reoccurs on a few of the albums 7 compositions (all composed by Millevoi). A slow organ and bass, played by guest Jamie Saft and member Johnny DeBlase, move over the top of Kevin Shea’s pulsating-turned-strolling drumming, all giving reminiscence of Tony Williams’ Lifetime meeting a Sunday morning congregation (all of this leads perfectly into “It’s a Hard World for Little Things”).

“Numbers Maker” takes the group in a completely different direction and highlights what I believe to be the strongest piece on the record. Saft’s pumping organ synced with DeBlase’s bass thumps provide a perfect “searching the desert or the cosmos” feel while Shea lays down an awesome slowed down motorik-influenced foundation. Millevoi enters with the main theme and the group keeps a steady pace while still improvising along the way. With an intro that I’d love to sample, or at least juggle in my DJ sets, and a mash-up of Spaghetti Western-influenced guitar, vibrato organ, and choppy but steady rhythm, “Numbers Maker” is one of my favorite compositions of the past year.

Midtown Tilt provides the listener with a great use of layering. Typically guitar led records put the leader higher in the mix than the rest of the group. Yet the balance provided by Saft (also the engineer I presume) focuses on the group effort and does not single out anyone in the collective (including what sounds like a vibraphone buried in the mix). Ending with “The Carideon” and “Fascination Fadeaway” (both containing some of the strongest soloing by Millevoi and Saft on the record), Midtown Tilt provides several displays of slow-to-rise musical exercises that take the listener from country-influenced earth tones to heavier stormy backdrops. Having given it several listens at different times of the day, it compliments my taste for when I rise and think about how to best take care of the growl inside, wondering what energy the new day will bring.