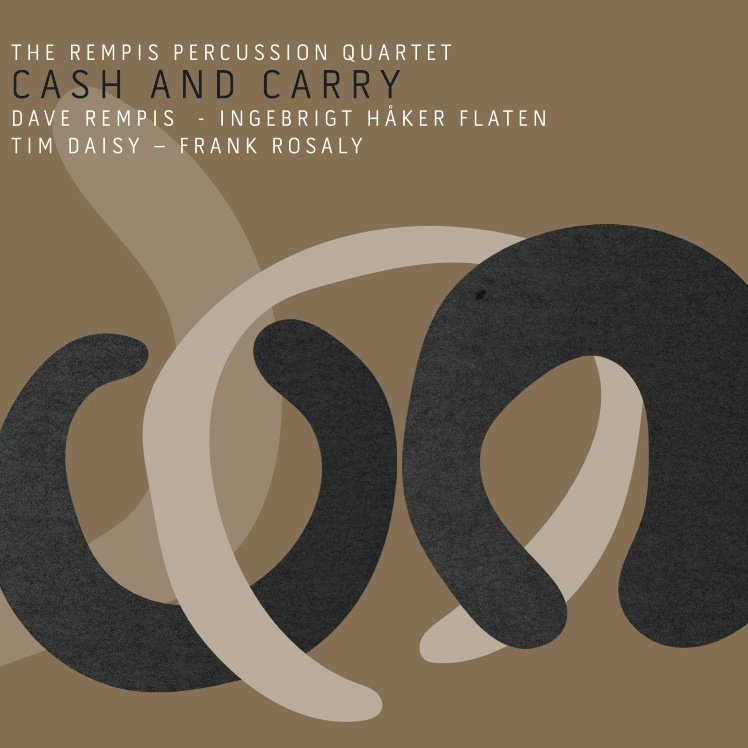 The Rempis Percussion Quartet is an ensemble led by saxophonist Dave Rempis with two drummers Frank Rosaly and Tim Daisy, as well as Ingebrigt Håker Flaten on bass. The opening track, “Water Foul Run Amok,” begins with an immediate foray into fire music! The recording’s audio is very clear. I can hear both drummers, one on the right headphone and the other on the left. Both drummers are providing the necessary drive, generally used behind free jazz horn players. Dave does an engaging solo for the first eight and a half minutes. After that, the band enters a different phase with the drummers using a less aggressive approach. Bassist, Ingebrigt Håker Flaten’s playing, becomes much more pronounced via arco bowing, nearly takes over the proceedings. Dave returns, weaving varying degrees of linear spider webs, thus creating new musical tapestries. This section is very effective as Ingebrigt Håker Flaten bows in the extreme low register of his instrument. He creates unusual poly-phonics, overtones and other atonal harmonics during this interlude. Dave follows this unusual chemistry as the band continues its journey!

Around the 16:15 mark, Dave takes the reins and begins carving a new road for the band to explore. Dave and one of the drummers begin a duo performance. The playing here is low key, modulating into African drumming with the tenor saxophone. The rhythm is almost a weird variation of funk drumming without the backbeat. It is quite catchy. When Dave plays a particular melody at the 18:33 mark, Ingebrigt enters on bass, mimicking the lines (18:39). This jump starts the music as they move onto a different groove. I’m surprised I haven’t heard of Dave Rempis previously. He has a lot of control and knows his way around the horn, in the David S. Ware sense of the word. Dave plays at length stopping around the 23:08 mark. One drummer is playing the drum kit while the other is playing a bell percussion instrument. The bass solo is short (from 23:08 – 24:15) followed by a drum solo. Dave returns on baritone saxophone at 25:13 on the heels of this rhythmic pattern in motion. Once the drum solo ends, Dave continues playing searing high notes.

The band attempts different ideas before finding the next handle. Dave puts together an engaging musical statement on the baritone saxophone. Basically, his solo is an exercise using a palette of experimental sounds. The unit is now entering a new space, the ballad. One drummer is using brushes. I’m hearing shades of Sonny Rollins during this section. Dave starts moving the band back into a free jazz feel and the group is suddenly, reaching for the stars. The high energy prevails until Dave changes gears, bringing the band back down to Earth.

Track two, Better Than Butter, begins with percussive beats from one drummer and the bass. Both play strongly, creating odd metered rhythms along with rhythms that are not in any clearly defined meter or tempo. The second drummer plays an African thumb piano while this gentle mayhem is underway. Dave changes to his alto saxophone. He quickly moves into the improvisations while the drummers maintain their percussive approach.

Although Dave is playing well, this section feels static, not moving. This proves to be an audio optical illusion? As Dave develops this section, his playing exhibits some similarities to Jimmy Lyons. The drummers lock into an African drum choir mode around the 9:20 mark. The work from the two drummers becomes very engaging as this groove pushes the band forward. This part has an excitement that will be appreciated by most fans. When a band has two drummers, it tends to turn into a drum battle. Both Frank Rosaly and Tim Daisy are actually playing together, complementing each other, making the groove tighter. Poly-phonics from the alto brings this song to an early end. Perhaps the band will do more of this kind of the material in the future. If you haven’t been following Dave Rempis, now would be a good time to hop on board. Dave Rempis is a rising star free jazz. Make plans to checkout Cash and Carry as soon as you can!