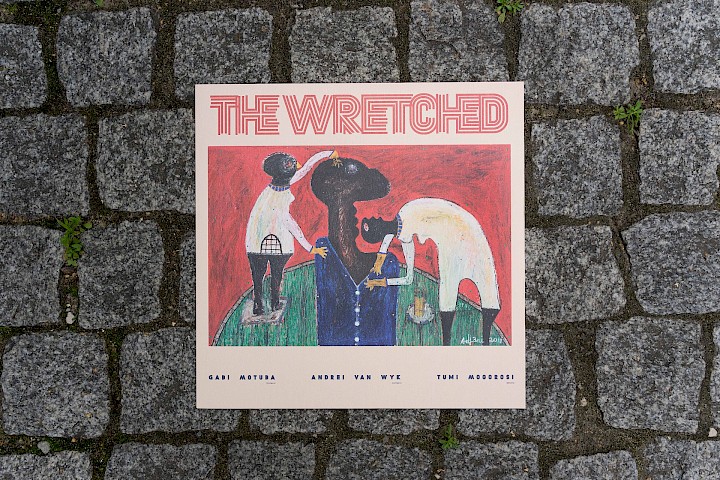 Through the broader lens of sounds coming out of South Africa, the Wretched sit at the periphery. But when listening to the rage emanating through their debut album, they’re situated right at the centre of the chaos and contradiction of daily life in the country. The album captures the feeling of a generation dealing with an apartheid-hangover and the trauma passed down and carried forward. The Wretched is Gabisile Motuba (arrangements, vocals and loops), Tumi Mogorosi (drums) and Andrei Van Wyk (guitar and electronic effects). Each have worked previously in backgrounds somewhere between classical, jazz, and experimental spheres over the past decade.

Motuba’s vocal range is extensive and can be heard more fully backed by a string quartet on her debut, Tefiti-Goddess of Creation, released last year. Mogorosi’s textured drumming is the force behind albums with Project Elo and bands like Shabaka and the Ancestors. Van Wyk is otherwise known as Healer Oran, working in production of sound collage, noise, and electronic music. Motuba and Mogorosi also have a collaborative group with Swiss pianist Malcolm Braff, with the record Sanctum Santorium.

As the Wretched, these players move conceptually into different sound platforms. Their live performances morph according to the mood or space, veering somewhere between quaint electronic or terrifying noise. The album is a manifestion of material developed through live shows slowly over a few years that uses spoken word, free improvisation, live instrumentation, samples and vocal loops. Mogorosi’s thunderous drums are met by Motuba’s moody but rhapsodic vocals – fed back and tweaked through loops. Van Wyk adds density with guitar and effects to the production.The Wretched situates the record through the text of revolutionary, psychiatrist and philosopher Frantz Fanons’ The Wretched of the Earth (1961), which lays bare the violence of colonization. Fanon’s work is widely cited in decolonial theory. The Wretched aim to re-situate Fanon’s text in current times, despite the sixty years that have passed since it was originally written.  Like the recent work by bands like SPAZA, The Brother Moves On, and Asher Gamedze – there is a clear interrogation of the political surroundings that artists occupy. In terms of Fanon’s text, most of the lyrics are collaged from the book, or rearranged in forms that emerge in small snippets repeated over time.

The record is a revisiting and sonic interpretation of the text in a way that attempts to speak against the oppression of colonialism, the violence of apartheid, and generational trauma passed down as a result. The violent insurrection Fanon calls for is enacted through sound. However the Wretched’s message is loud and clear, even for those who don’t know the text. It is self-evidently demanding for the unsilencing of their cumulative sonic voices. The album finds kinship in the work of artists like Moor Mother now, and earlier by Abbey Lincoln and Max Roach, where sound is a form of resistance.

Black noise and dissonance are explored through shouts and drum rumbles. The injustices which are ever-present in the realities of these individuals find their outlet through immediate loud, almost screaming, noise gestures. It creates a jarring sense of discomfort at first but slowly develops into trance-like meditation. A variety of rich samples and archival material occur throughout, from the daily grind of taxi’s trying to hustle commuters in Cape Town to speeches, which Motuba responds via loops and echoes. One should also consider the live performance as essential to the creation of this work. Their live in-your-face attitude is the core of this record.

Side A, starts with a build-up to chaotic noise with tracks “Wanderers,” “The Fella,” and “Sonic Letters.” “The Fella” concludes with an audio snippet of Professor Pumla Gomodo-Madikizela, a scholar on generational trauma. As an alarm against forgetting – with foreboding basslines from Van Wyk and relentless drumming from Mogorosi – in “Sonic Letters” the message is clear that the road is long ahead. “These are sonic letters. These letters carry messages, to remind us of the work that must be done,” repeatedly warns Motuba.

“Nkosi Sikeleli” is a personal favourite which starts off Side B. An extended version of the composition, originally a Xhosa hymn composed by Enoch Sontonga in 1897, which became a pan-African liberation song and later the national anthem of South Africa in 1994. Its symbolism is rooted in African unity and liberation. Motuba’s vocals are collaged with a speech made by revolutionary hero Chris Hani, who was assassinated in the 1993. That is followed by the title track, “The Wretched,” and “Amen.” The album can be heard as one single suite. Through this sonic exploration of text, quote, archival material, and improvised sound, the Wretched explore the Black liberation experience in ways of imagining a decolonized future.

For the fairly understated trio, having a vinyl release is important considering there are no pressing plants in South Africa. The album was released quietly in July under global lockdown, by Berlin-based SAVVY – one of the few Africa-run contemporary gallery spaces in Germany engaging with the African diaspora. The album is among SAVVYs first releases as a record label, and the liner notes read as a lengthy essay penned by founder Bonaventure Soh Bejeng Ndikung.