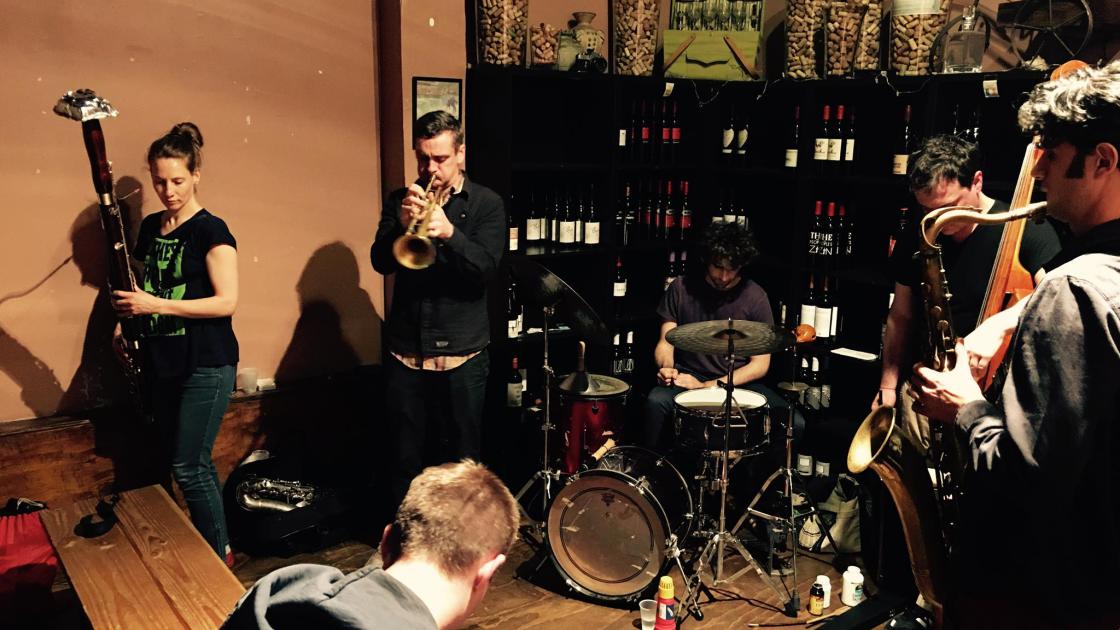 I have never heard “environmental improvisation” used as a term, but it seems fitting to describe the music of the Sandra Weiss Quintet that I experienced at the 65Fen Series at Delroy’s Cafe and Wine Bar last night. The band is led by the Swiss reeds player (bassoon and alto saxophone) and is comprised of four Brooklyn-based musicians: Kenny Warren (trumpet), Jonathan Moritz (tenor and soprano saxophones), Sean Ali (bass), and Carlo Costa (percussion). The personnel selected for the group is superb–all involved are very skilled at the kind of avant minimalism that makes up Weiss’ artistic vision.

Experimental music sometimes creates cross-sensory experiences, and most commonly for me, in the form of vibrant images. Last night was a true delight in this regard. The music of Weiss and her bandmates conjured up an entire world and though each member of the audience no doubt consumed it differently, I will share my personal experience here. From the outset, the quintet conjured a living rainforest of sounds ranging from a multitude of buzzing insects–reeds and percussion–to the cackling of exotic birds and the chattering of wild monkeys (trumpet). To this, Moritz added the flapping of wings, the crackling of branches. Every member of the quintet is adept at even the smallest sounds and as the music ebbed and flowed–as passing sounds dissipated into the distance–they returned to the simple flow of the air through the branches and leaves. Then something would spark, like Costa’s percussion mimicking a rustle in the unseen underbrush. The performers made even the air seem heavy, at times, as one could imagine the thick humidity setting condensation upon every surface. Then Ali’s bass emerged with the startling heartbeat of some inhabitant of this space on the run, moving past the audience, quickly navigating through the vegetation of sound. Weiss followed with a snarl of some stalking predator. Then back to the simple air moving, churning through the dense trees, permeating all that exists. Costa emitted a solitary buzz, an insect left behind by the swarm that had since moved on. This was followed by sustained stillness made lush by the feeling of absence. Weiss’ bassoon then let out a groan, like a tree spirit watching all the action pass it by. Wind ached the branches, but still the spirit emerged, soon to be joined by others in a dance, each singing in different frequencies, though there was a certain noir in their interactions that they did shake despite the growing frenzy. Then the thwap of branches came from Ali’s bass.

Finally Weiss, having switched to alto, brought a searing intrusion–a human invasion with vicious sounds cutting through the ancient trees in searing metallic arcs. The fissure of the organic landscape was further propelled by the more malleable sounds of Warren’s trumpet. Gradually they eased towards harmony once again with the chittering of birds renewed and that immortal air washing over everything. But still, the screeching monkey in the treetops shouted its triumph, even as deep bass lines–the stalking predator returning–could be heard underneath. Then, growing discord brought the piece to conclusion without resolving the question of survival.

Go experience live music. I am sure you would have your own story to tell.