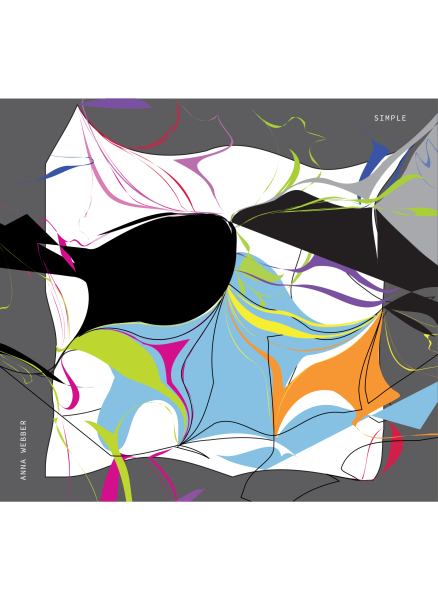 This record is a fascinating window into the mind of a talented, young composer. Building off of her previous record, Percussive Mechanics (2013), Webber’s new band, the Simple Trio, strikes boldly into new territory. On the surface, this is a surprisingly unpretentious record in that it sets out to take rhythmic structures (ranging from simple to complex) and then set them spinning through vivid evolutionary changes and reflections. For this purpose, Webber could not have chosen a better supporting cast: pianist Matt Mitchell, known for his ability to find coherence in all manner of challenging meters and structures, and John Hollenbeck, who adeptly anchors this ensemble.

From the first note of “Carnophobia,” it is clear that the listener is in for an adventure. The piece takes off like a high speed train, carrying us through flashing, kaleidoscopic mutations of an underlying idea. On “Emoticon,” these repeated rhythms even appear jagged or metallic in their endurance, while “1994” introduces us to contrasting fluidity where the shapes of the piece bend, but still retain their character. The brilliance of the composition is how Webber maintains the right angles of the songs, while managing to set them at differing intervals in our line of sight. Or rather, she takes the frame of the sonic picture we are observing and twists it right and left, showing us different ways of hearing the original kernel. This is not an easy thing to do, especially because of the potential pitfalls–repetition, overbearing structures, inflexibility, among them. Instead, Webber proves herself to be an alchemist who, on this record, invites us along in search of the rarest of alloys.

All three musicians flourish on this record. Often it is Mitchell who is placed front and center with his decisive forays and bold key strokes. His solo on “1994” is a work of unsettling beauty. Hollenbeck is present at all the right moments, sometimes playing sparingly, while at others providing driving rhythms and kinetic energy upon which the others build. Webber, meanwhile, sometimes contributes to the rhythmic nature of the pieces, while at other times her sound washes over the joists and gears of the other players. In her solo moments, especially her flute opening on “Washington,” we get to hear her disciplined tone as it surges and recedes. And at some of the record’s most interactive moments on “Washington” and “I Don’t Want to Be Happy,” she provides buoyancy to the music and a stark surface upon which piano and drums dance like a rainstorm.

The record release concert is set for Thursday, September 25, 8 pm at Shapeshifter Lab on a double-bill with Claudia Quintet.