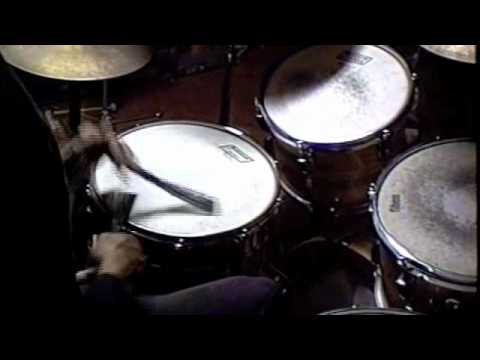 This is the second part of a multi-part interview with drummer and composer Tomas Fujiwara. His quintet, Tomas Fujiwara & the Hook Up will release their third studio album in April.

Cisco Bradley: Your brushwork is stunning in many contexts, but has really stood out with your band Thumbscrew (with Mary Halvorson and Michael Formanek). Could you talk about how you developed your technique and what you feel it contributes to the aesthetic of your music and compositions?

Tomas Fujiwara: Spending a lot of time with the brushes first came about by necessity. When I was 18, 19, 20, I did A LOT of restaurant, bar, and lounge gigs. We’d play 3, 4, 5 sets a night, for a bunch of people paying no attention to what we were doing. (As a side note, I remember a night when we were trying to learn a band member’s original composition. One set was the same song 5 or 6 times in a row, just so we could work on it and get comfortable with it. No one seemed to notice. I think it was 2 for 1 oysters happy hour, so you can’t really blame them…) Most of the owners and managers wanted three things, and three things only: Start and end on time. Dress “appropriately.” And be as quiet as possible. If they saw you even hold a pair of drumsticks, they’d freak. A lot of places had a “brushes only” policy for the drummer. So I was stuck with those things in my hands night after night for hours and hours. I had always watched Alan Dawson play amazing things with the brushes at gigs of his I would attend as a kid, so I started with that as inspiration. Alan had passed at this point, so I never got a chance to ask him a lot of brush questions, but the things he played were ingrained in my ear. There’s an incredible YouTube clip of him explaining the brushes to a student. Amazing.

From there I checked out Papa Jo Jones (Alan’s first inspiration) and the range of things he could play with the brushes. I would watch videos (this was pre-YouTube) of anyone playing brushes, because seeing the particular strokes and patterns a drummer is using is very important. Papa Jo, Vernell Fournier, Ed Thigpen, Elvin Jones…wow. I took a couple of lessons with Chico Hamilton, just about brush technique, that were eye opening. And I would take all of this stuff and practice it on my restaurant gigs. I would work on the various patterns on the snare drum, like painting shapes on the drum head with the brushes, as well as articulating stickings that I would normally play with the  drumsticks. I had been playing Alan’s Rundimental Ritual for years, and I started playing it with brushes.

When I play the brushes now–a choice rather than an occupational demand!–I think about the sound and texture and mood. There are legato and sustained sounds that are very specific to the brushes, and they can add a lot to a piece. When I think about cellos and violins, I think of the brushes. They can also feel very evocative, like mimicking sounds found in nature, or produced by machines–gears and levers. It’s more challenging to articulate stickings with the brushes–less rebound–but when played clearly, a lot of phrases sound great with the brushes on the drums and cymbals and create a totally different atmosphere than playing the same thing with sticks. I like to use them to play melodies as you can often “double” the melody without getting in the way of the other instruments playing it. Alan did this a lot. He had a specific exercise involving the Sonny Rollins composition “Oleo” and you could always hear the melody so clearly the way he played it with the brushes.

Cisco Bradley: What connection is there, if any, between visual images and the music you produce? Are there particular colors, shapes, or objects you have felt especially compelled to represent in your music?

Tomas Fujiwara: There’s a huge connection for me. I’m always composing as if I’m writing a soundtrack. There’s almost always a picture or scene in my head when I start, and I go from there. Like the first notational sketches for a composition, I often abandon or even forget the first images, but they’ve served their purpose of getting me going. Once I’ve started, I might reference any number of visual ideas swirling in my head as I write. Sometimes they follow a story or a common theme or a through-line, but usually it’s more of a collage of images and moments. A lot of them will be mini movies in my head–a scene or two. Or there will be a painting, sculpture, photograph, really anything visual that creates a spark. I’ve checked out a lot of Egon Schiele’s work over the years, and last summer I spent some time at the Leopold Museum in Vienna, which has the largest permanent collection of his work. I’m not usually drawn to such dark visual art, but I couldn’t stop looking at his pieces. Chris Ofili’s recent exhibition at The New Museum–in some ways at the other end of the spectrum in terms of being very colorful and vivacious–really stayed with me. And dance. The rhythm of body movement has so much in it to inspire music. The Batsheva Dance Company’s Sadeh21 absolutely floored me. The rhythm and phrasing in their movements, the freedom with precision, and the patience to develop a piece..unbelievable. I’m still absorbing that performance.