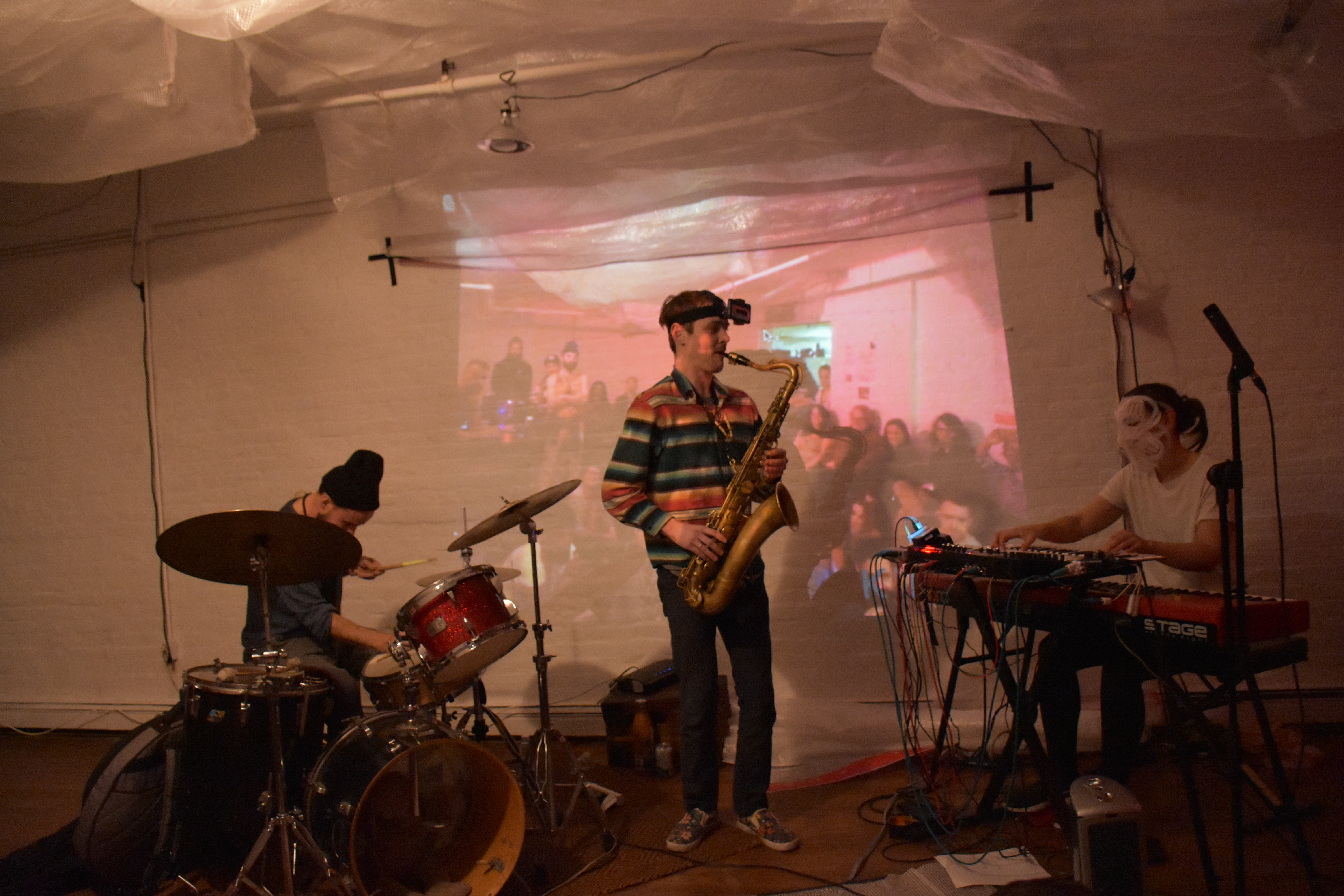 VAX lit things up at De-construkt on Saturday night. The room was packed and, as always with a VAX performance, there was considerable chatter within the audience before they took the stage about what might occur. VAX events are more than a simple concert, they are an event, one that is a bit more of an immersive experience than your common gig or art gallery opening. VAX demands your attention, or will pry it loose from you if you do not have the presence of mind to be present: Wake up. There is more than meets the eye or the ear. We are jolted into consciousness from the lull of the mundane, or the crisis of self-absorption. VAX brings us to an awareness of our own experience as part of the greater human tale.

VAX is comprised of Patrick “Trix” Breiner on tenor saxophone, Liz “Biz” Kosack on keyboards, and Devin “Vone” Gray on drums. The band is greater than the sum of its parts, however, as they feed off each other both conceptually and in terms of energy. They once told me that the band began with the concept of someone bringing an idea. The others could only reply with “and …” It is an anything goes kind of mentality where they push each other. Some things seem almost to have been ventured as a “dare.” As Breiner plays the most mobile of the instruments, he often serves as the vehicle for some of their most adventurous ambitions. 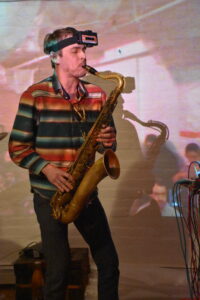 (Breiner with VAX, live at De-construkt)

On this particular occasion, Biz and Vone opened the set with a repetitive line, but were soon joined by Trix, who walked in from off-stage while wearing a head camera so that the audience could so what he saw from the images projected onto the wall behind the stage. This play on vision and point of view became the guiding narrative through the work. At different moments throughout the performance, Trix removed the head camera, setting it up to show his collaborators at different angles, or even shots of particular audience members. The sounds, like the video, made us see these people from alternative angles, sometimes bringing us into an intimate closeness, or at other times giving us a perspective that we could not have gotten naturally otherwise. The sounds pushed these out-of-body experiences to the realm of cross-sensory bridges where we were literally outside of ourselves, floating, like the sound, amidst the myriad other “objects.” Through the course of the hour-long set, the music explored highs and lows, friction and diversion, direct forays and subtle whispers. Biz wore one of her characteristic self-designed masks throughout the entire performance.

The piece came to a close with Trix wrapped in some kind of flame-retardant covering on the floor speaking into the microphone just above a whisper, thanking, in great detail, nearly every person by name who was in the audience. Having seemingly summoned their following for this magical display, they bid farewell until the next encounter. VAX is music for the future.They next plays in Berlin in May.