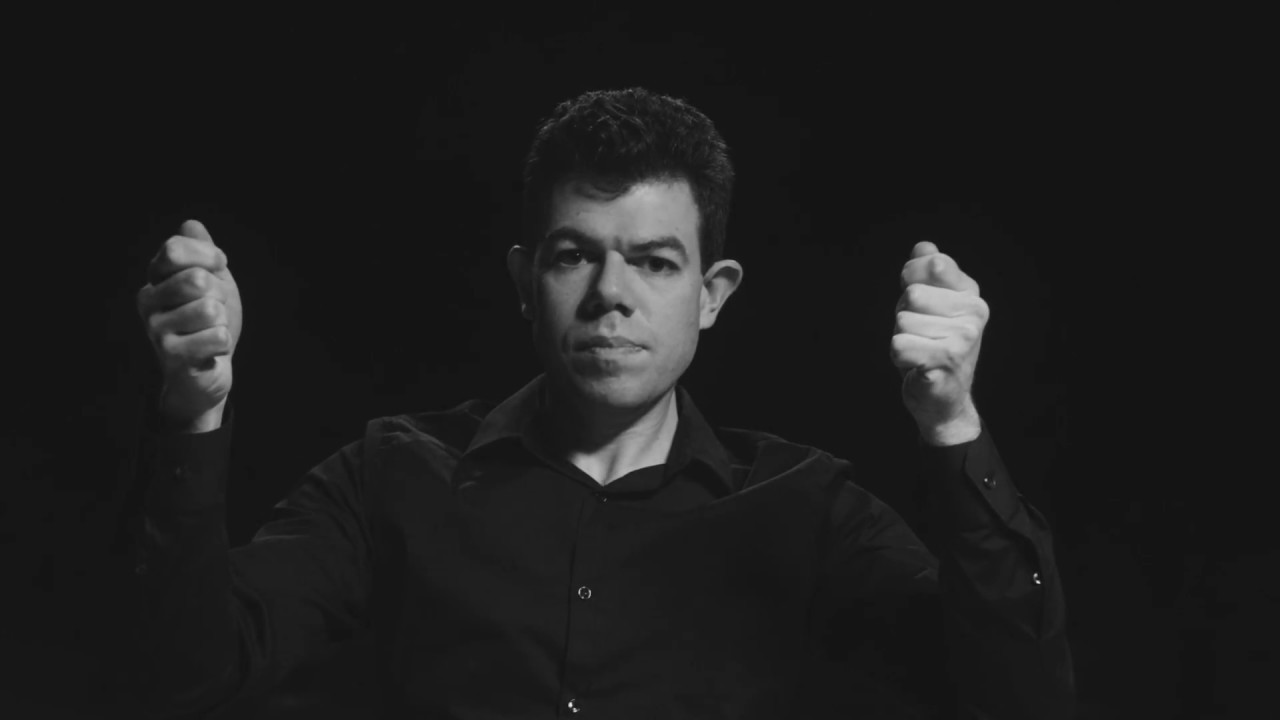 Yarn/Wire‘s ambitious Stone residency included some experiments worthy of the designation “experimental” to be sure, and Popebama was no exception.

On one of the coldest days I’ve experienced here in New York City, January 30th, I walked from Tribeca to the Stone at the New School in the Glass Box Theater. I had been there the day before to see Rick Burkhardt‘s Yarn/Wire collaboration and was flabbergasted by the amount of precision and care that had gone into the performance of such complex and ornate work involving wildly beautiful techniques (five minutes of clicking pens on various surfaces, I’ll say no more details) and unexpected experiments various and heart-wrenching.

Obviously I arrived frozen and anticipating some beautiful music.

I was struck immediately upon my arrival by the sheer amount of tech which was on display and in use in the space (Erin Rogers had warned me the day before, she had also played sax with Burkhardt and the Campfire Requiem Band) – peeking through the panes facing the street I could identify all sorts of kitchen implements, laptops, machines and of course huge percussion setups dominating the space with audience chairs somehow arranged into four quadrants.

After passing through security (always a novel experience at an experimental music show) I noticed a large group of attentive and excited students surrounding some familiar looking faces, who I later found out were those of performance artists Elyse Johnson and Jazzmint Dash, New School adjuncts who had chosen to sit immediately next to the other side of the aptly named Glass Box, which had most likely been vibrating with tests of the technical equipment and non-traditional instrumentation inside. I paid $20 (the shows are free for New School students, Stone volunteers, and anyone the musicians put on the list – all the money goes to the performers). There were many other friendly faces and the atmosphere was calmly excited for the five pieces which were about to be performed.

The duo of Popebama (saxophonist Erin Rogers and percussionist Dennis Sullivan) began with Rogers’ “Light-on-Light” (commissioned by MATA, 2018), which Rogers explained had been reworked for performance by the duo. A fantasy of musique concrete, extended saxophone, and percussion (often effected with electronics), “Light-on-Light” is inspired by trips on Canada’s light rail system and is indicated on the score by the composer as a “journey through time and transport.”

Each of the five pieces addressed the issue of what music can experiment with, and this first topic seems to me to be “representation” – a common issue in fine art and something the Romantics seem to have been excited by but which does not often appear in “new music.” Here Rogers focuses on the subjective experience of transport as such, what are the sounds and feelings we encounter when simply trying to get from one place to another? How did humans get the idea that a large machine on a track was better than a horse or just walking and what are the implications of that idea? Clouds of steam, the sounds of wheels, metal on metal, people talking and navigating that special space of the train all whirred by as the duo frantically recreated the score (originally written for 3 performers).

Rogers had a large sampling pad and a small hotel bell at her feet, in addition to two saxophones. Sullivan had a large table with several percussive implements I won’t get too deep into, but will note that included among them were sandpaper, wood, and metal, almost as if the perfect instrument for which to play the percussion part for this piece would be the train itself. At one point near the middle, Rogers dissembled her tenor and slowly but precisely handed it to Sullivan while retrieving her soprano – Sullivan grasped it with care and began to play it in precise rhythms without blowing, the instrument itself became a percussive instrument, much like a train could in the world of the piece.

The sounds of the instrumentation mixed wildly with sampled train sounds, but making frequent stops (as if a local train stopping at various towns), bars of tacit where the space of a sample could breathe, or the audience could process the blasts of chaotic saxophone and furious drumming. At several points Rogers spoke deftly into the instrument, and upon looking at the (generously provided to me as a reviewer) score noticed that there is an actor called for and several light cues. In this duo arrangement the light rail experience was palpable as taking place within the music, I’m thrilled that I was there to experience this experiment with representation in sound – a journey which used the structuring of time and auditory material to transport us into transport.

Next was a performance by Yarn/Wire (Ian Antonio, Laura Barger, Russell Greenberg, Ning Yu) of Dennis Sullivan’s “Divide.Dissolve.Uncreation III” – a work I’m extremely pleased to have seen the score for, as it shed light on certain choices made during the performance which at the time I found intriguing and a bit mysterious. The class was still meeting outside the theater, pressed up against the glass, aware but occupied, their low murmuring continuing but somehow not obtrusive to the performances in the slightest. 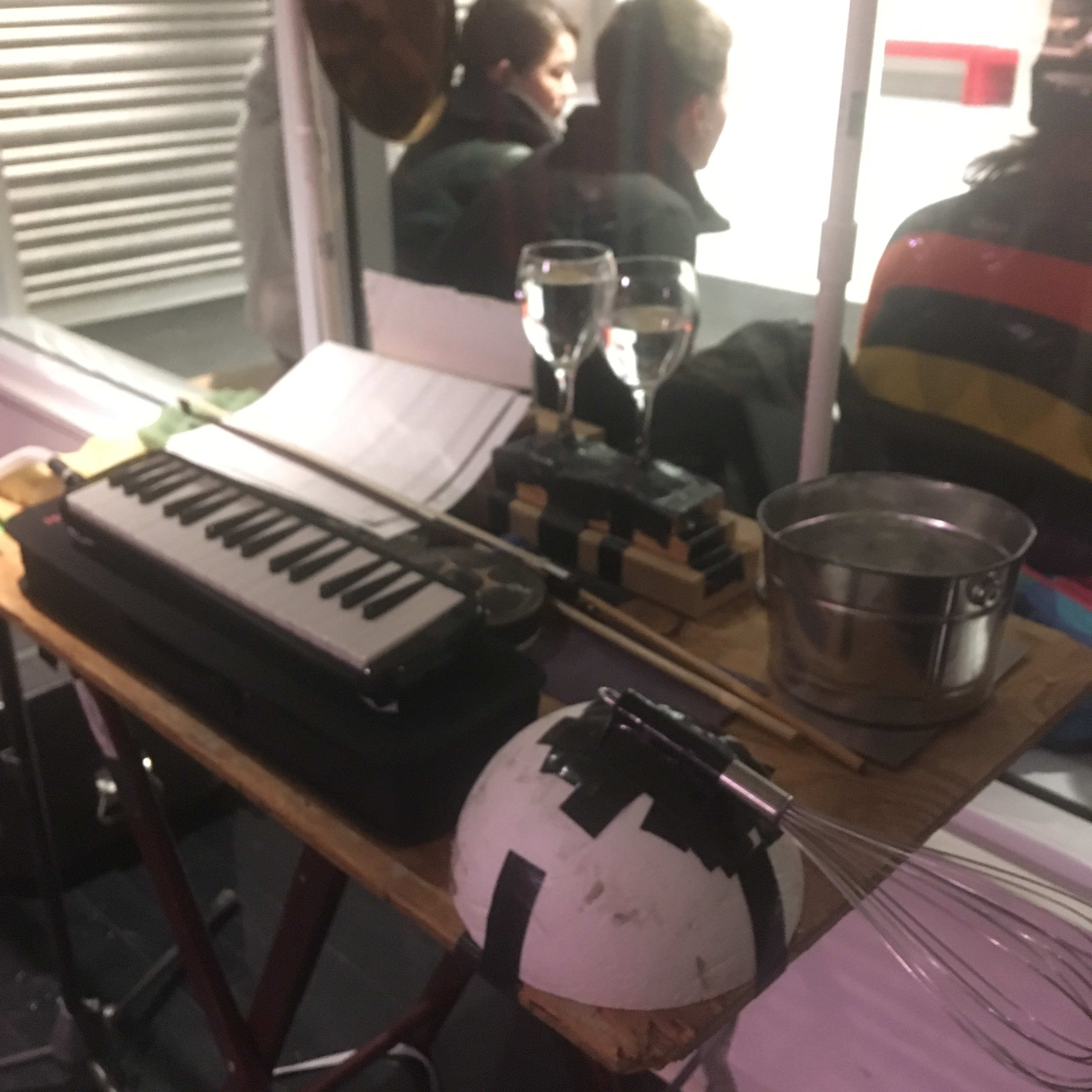 (A picture of the percussion setup for “Shedding Waste” – I took this before I saw the no photos sign… and before the show started, because…. look at that whisk!)

Upon looking over Sullivan’s instructions regarding vocals a phrase stuck out to me more than others – “You’re safe.” Written for the 2 pianists and 2 percussionists with electronic tape part, a few unusually unusual instruments on the trap table included a whisk taped to a large styrofoam bowl and some small white funnels, in addition to a piano prepared with erasers and ear plugs. The reassuring instruction made the jarring and spectrally-inspired tape part make more sense to me, it’s a work dealing with what it feels like to be in front of others, to handle anxiety and to persist in something which others seem to not understand. You’re safe.

At the beginning of the piece a horn outside rang out in harmony with the gorgeously dissonant piano chords melting into the tape part punctuated by percussion. The class outside also suddenly increased in volume, making the several silences that make up Sullivan’s piece written just for this ensemble all the more palpable. There was a definite feeling of non-safety and confusion, but Yarn/Wire persisted, unperturbed through it all. Especially strange to me at the time were the small funnels placed in the mouths of the performers – but upon looking at the score I discovered that in addition to functioning as amplifiers for consonants (“T” and “K”) the funnels also served to render uninterpretable the realization of Sullivan’s instruction to “Tell the audience something personal” during what would have otherwise been a tacit. Laughter from the class outside made these moments all the more delicate in contrast with the complex interplay between the ensemble and the tape.

As the tape increased in volume and intensity pianists Barger and Yu got up from the piano and ceremonially closed it, almost seeming to walk out in protest of the intrusive tape sound. Percussionists Antonio and Greenberg bowed everything (it seemed) frantically, eventually walking into the audience with their bows in hand – I followed them with my eyes but they disappeared to the back of the space.

The tape part slowly finished, and the class also got up to leave, talking amongst themselves.

It was announced that there would be a brief break to set up for the middle piece – I got up and said hello to the performance artists outside before hitting that bathroom (no longer behind the performers as at the old Stone on Avenue C), making it back just in time to catch the only piece not composed by Rogers or Sullivan, “untitled (for 2)” by Daniel Silliman, written specifically for Popebama.

The score for “untitled (for 2)” contains a very precise drawing of the setup for the duo, with letters corresponding to the various aspects of the machines used: two tape players, ebow on a long piece of metal, snare with piezo receiving feedback, mixer, saxophone, reverb, overdrive, and octave pedals, with even the routing of the wires drawn out by the composer. This uniquely overlapping set up was accentuated by the placement of Popebama in the space, in the “round,” surrounded by the audience, able to watch the manipulations of the machines by Sullivan and Rogers’ deft control of her instrument.

Here the experiment at work is notation of the nearly un-notateable, namely the timing of playing tape machines and mixer routing moves. Silliman uses techniques of graphic notation to correlate saxophone pitch choices with manipulation of the instruments on the table. In particular I found the sound of fast forwarding and rewinding of the tape extremely effective – conjuring an atmosphere of depth and complex tone colors to great effect.

The next piece played was a piece for Yarn/Wire by Rogers, which she introduced as “Flashdance” – apologizing for the fact that while it was intended to be more reminiscent of the movie and/or the soundtrack thereof, the composition had become something else in the writing and was in fact primarily influenced by the use of 1980’s analog modeling “Fizzy Synth” and a Linn LM-1 drum machine patch controlled by the composer.

For this performance Ning Yu played two MIDI controllers connected to Rogers’ laptop, Barger played the acoustic piano and Antonio and Russell tackled their usual large percussion setups but with a MIDI drum pad between them for triggering samples. The electronics, piano, and synths interlocked with each other in polyrhythms of 3 against 2, reminiscent of the pop music which makes up the soundtrack of “Flashdance” – but also with percolating quintuplets (used extremely deftly in much of Rogers’ music, the piece “Trajectories” recorded by thingNY in 2016 comes to mind).

The final piece, Sullivan’s “Shedding Waste,” is nearly indescribable. In a short introduction, Sullivan referred to its roots in  using the auto-captioning aspect of YouTube to parse a piece by Mark Applebaum entitled “Aphasia.” I’ve included it here so you can do it too – but Sullivan didn’t stop there, he masterfully combined the results of the captioning misunderstandings with sax and percussion parts which burn through the text at a blistering rate.

I could try to describe this piece in detail, but this article is already far too long. I’ll end with a recommendation: go see Popebama. Go see Yarn/Wire. Go see new music (beyond the use of the term to describe a genre or movement). Any of it. Support living composers. Especially ensembles like Yarn/Wire who are actively engaged in commissioning and performing new pieces by people who are masters of their craft.

The more uncomfortable things sound, the more exciting they can be to experience. Embrace that which you do not understand. Especially if it demands next to nothing in return.