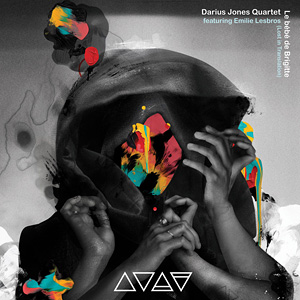 It is a pleasure to receive this CD. I first encountered Darius Jones when he was with a dynamic band called Little Women, a noise jazz band. Given Darius’ background, I wouldn’t have expected Darius doing the CD I now have in my hands. Such a contrast! On this CD, Darius has new musicians as his supporting cast: Matt Mitchell (piano), Sean Conly (bass), Ches Smith (drums), and a second bassist, Pascal Niggenkemper. For this recording, vocalist, Emilie Lesbros is thrown in the mix. While I don’t know Matt, Pascal nor Emilie, I am familiar with the remaining members of this group: Sean Conly, Ches Smith and Jones.

I had no idea what kind of music this group was going to perform given the addition of a vocalist. I would consider this a ballad CD, much in a similar vein as the recordings John Coltrane did for a short time. There was a period when he was on the receiving end of negative feedback as he began exploring what would eventually become the free jazz. While not all the songs are ballads, the feeling of this CD tends to put it in this category. From the first song to the last, Emilie shines with her vocal skills, singing in French and at times, in English. She mostly sings in French, adding an exotic flavor to the songs. In this case, her French is very effective for this group.

“Two Worlds, One Soul,” starts off gently with Darius and Emilie sharing the melody together with a slight atonal quality. The rest of the band joins, playing gently behind Emilie. The band takes care to keep their dynamics low. Emilie speaks in French during this section. When Darius returns, he and Emilie again share the melody together. This unison linear approach makes the piece swing far beyond the action that’s actually happening. It has the effect of making this song, much bigger than life. Once Darius takes over, Matt changes to an electric keyboard. The sound makes me think of Miles Davis’ fusion era. The piece moves calmly along. The musicians are very relaxed while they are playing this song. When Emilie does spoken word, the electric keyboard’s sounds surrounds her, filling the space. Near the end of the song, Darius returns sharing the melody with Emilie.

“Chanteuse In Blue,” is very structured with a marching band swing feeling. The bass is walking, evoking the spirit of Jimmy Garrison, while it is reminds one of Elvin Jones in terms of the pulse. Ches Smith maintains the beat while punctuating the music with the right accents as dictated by the melody. Emilie does some scat singing with the band. After Emilie does spoken word, Darius enters around the two minute mark. Matt Mitchell is up next for a short solo beginning at 3:09. He continues the groove with a Miles Davis Quintet-feeling and then Emilie returns with more scat. During this musical exploration, her singing tends to break the groove that the band has been playing. It becomes a thick mixture of varying elements. This leads to the band coming in with the main melody at 5:41. The melody on this track is quite catchy. It will make one nod their head in rhythm to the beat. At the 7:14 mark, the band moves into a final section that suggests Latin funk.

“Universal Translator,” continues with strong fusion-like melodic lines. The accents are quite pronounced. Most listeners will like the way the accents are placed throughout the melody. It’s quite enjoyable to hear such bluesy lines! Darius gets very free when he solos on this track, however the band, maintains the form and don’t deviate from that very much. Matt Mitchell takes a fairly long solo while the bass and drums stay on top of the theme. Ches Smith sounds very good on all the tracks of this CD. He shines rhythmically on this piece with the bass accompaniment. He takes off at the 5:35 mark with a melodic drum solo. After the seven minute mark, Darius returns and the band begins playing the head, a soulful melody! As the song ends, the playing gets freer, but it’s all leading to the end of the piece.

“Beneath the Skin (We are Already One)” starts with Emilie taking the lead. This song is most definitely a ballad, almost in the traditional jazz sense of the word. Darius plays mournful lines with all of the other musicians supporting. I think this composition is a mirror reflection of the times we’re living in and reminds me of Coltrane’s “Naima” or “Alabama” compositions. The sadness that accompanies this song, is brought out by the musicians and the vocalist. Matt introduces “I Can’t Keep From Weeping,” with a simple motif.  Emilie comes in and supports the template for this piece. This style of  music is reminiscent of Eloise Laws.

“Quaint Vient La Nuit” is the last song on this album. One of the bassists is using atonality almost exclusively in the background as the song begins.  Ches is using small gongs prior to Matt’s entrance on piano. Emilie joins this simple piano riff. Darius is in the backdrop making sounds that are clear markers of free jazz exploration that are about to follow. Darius takes center stage while not over powering Emilie’s vocal work at the 2:33 mark. Emilie gradually starts getting more experimental with her singing. Throughout the early part of the song, Emilie follows Matt closely as he plays lines for the group. While the format is quite simple, it has lots of space for everyone to explore. At the 5:03 mark, one bassist starts using the bow making extreme atonal textures while Darius is soloing. The polyphonics from the bass provide an interesting contrast between what Darius is playing and what the band is doing in the moment. It sounds similar to some Australia Aboriginal music on the didgeridoo. While this atonal landscape is in progress, Darius ends the song abruptly with a sharp edge! This was another ballad, however, it was highly eclectic in nature.

If you like Darius Jones, you will want to follow him as he continues his musical journey. Do pick up this CD. I’m already curious to see what Darius does on his next recording.