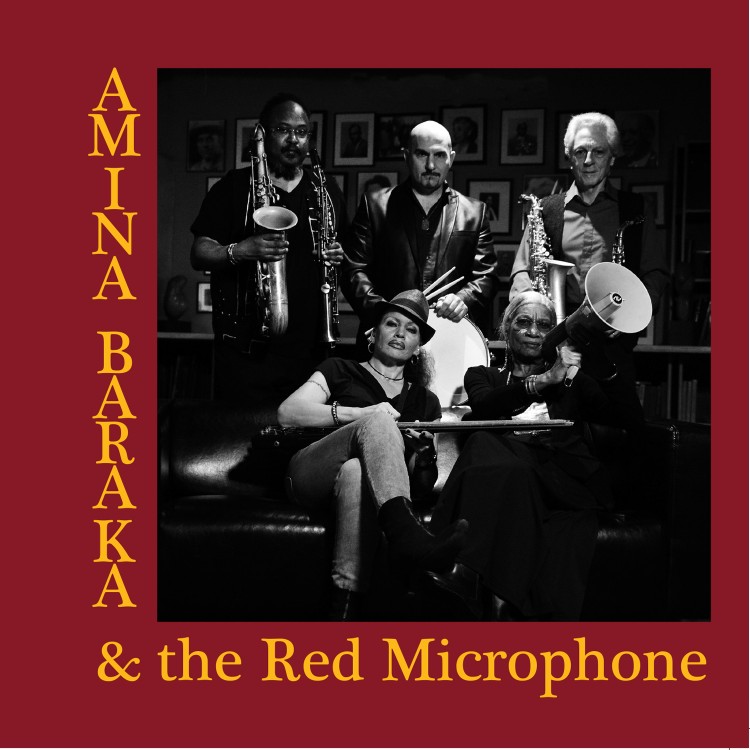 Celebrated poet, organizer, activist and actress Amina Baraka is a central figure in the living history of the Black Arts Movement, along with her late husband Amiri. On her latest project, Baraka digs deep into that poetic and political history, unearthing a bittersweet, timeless Blues for the working class. Backed by a tight, intuitive ensemble of instrumentalists (known as the Red Microphone), Baraka delivers an ambitious full-length project that feels like a love letter to the struggles, poetry, politics, and culture of Black people.

The album opens with “Time Step” a swinging Blues abstraction, Baraka’s vocal delivery ringing with passion and immediacy as she leads a clarion call of dancers, musicians, fighters, workers and revolutionaries around the world: “if they could hear us coming … meeeean and cleeean. Slow-dragging, purple BLUES … PRINCE … signfying … riding HIGH …” “The Spirit of Billy Bang” is a thoughtful and creative tribute to the late violinist. Baraka’s delivery is delightfully charming and playful, drawling and dancing on top of Laurie Towers’ dramatic, rolling bassline: “Billy the violinist was a dangerous man … Bang showed up, pulled out his bow … eeevvverybody know.” “Things I Love” finds Baraka running down a laundry list of people, places and things that bring her joy. “I love the full moon, I love a summer at midnight … I love a Duke Ellington song …” Baraka declares “I love Albert Ayler’s ghost!” and the band immediately responds by launching into a firey Ayler-esque crescendo of sax and clustered piano chords. “I looooove Charlie Parker … I love birds and I loooooooooove toooooo flllllyyyyyy”, the entire tune beaming with warmth and authority.

The intro to “Afro American Child” reveals Baraka’s voice emerging to intertwine sweetly with Rocco John Iacovone’s dreamy, lyrical playing. The song of a young child’s experiences growing up, the sights, the sounds, the people, the culture. Like so much of Baraka’s poetry on this album, “Afro American Child” calls upon both the subjective memory of the individual as well as the deep collective memory of the people. With her vivid description of Black cultural life, Baraka sets up a duality, exploring the ways in which our cultural creativity thrives through contradiction. “… People who could create both the Gospel and the Blues … and did. People who could pray AND cuss … and did!” Her tone here is bitter and sweet, determined but loving.

“Talking Drum” drum and vocal piece in which John Pietaro solos brilliantly as Baraka, lacovone, Pietaro and saxophonist Ras Moshe Burnett evoke the names of some of music’s rhythm masters: Tony Williams, Philly Joe Jones, Olatunji, Max Roach and many more. Tracks like “Talking Drum”, “Jayne Cortez” and the gorgeous ballad-like “Real Dreams” are standouts on an album that beautifully mines the deep well of memory while playing tribute to the beauty of our shared cultural ancestry.