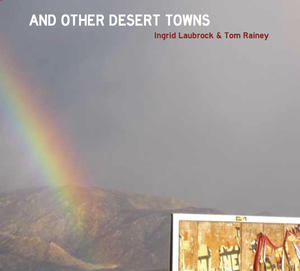 Freely improvised duos present music in its rawest form: two musicians each with intimate understanding about their counterpart’s abilities, tendencies, and artistic vision delve fearlessly into each other. Then, over the course of the encounter, we see the results unfold: forays and feints, clashes and parries, trust and surrender. Finally we have available a recording of a rewarding duo pairing saxophonist Ingrid Laubrock with drummer Tom Rainey. The two have played together in myriad bands in New York since Laubrock’s arrival in 2009, with the duo as a casual project amidst many others. The album, And Other Desert Towns, released just last month, shows both artists breaking new ground, while digging deeply into themselves and each other.

For those who know the music of Laubrock and Rainey, this record may come as a surprise. Laubrock, whose playing one might often characterize on the fierce and fiery edge of tenor and soprano saxophone, seems to have discovered a new voice within herself. Her playing here explores a wide range of subtleties without her ideas losing any measure of potency. Rather, she has expanded her range of emotional expression to match Rainey’s already versatile and diffuse approach. Together, they unveil ten tracks that each capture a provocative encounter between musicians while contributing to the broader musical mosaic of the record.

“Patio B” begins with a heavy dose of cymbal and warm tenor to warm up our ears. “Lost Creek” then builds gradually with a mellow if increasing energy. Rainey gently introduces us to his kinetic, off-kilter rhythms that he explores throughout to great effect. His sound is unique among percussionists–he has established a comfort with irregular rhythms to such a degree to produce stability (ie. music that sticks together) without rigidity, always propelling the music along. There are no right angles in such music and no rounded edges either, but rather radical new geometries of sound that connect at unforeseen points in shapes that defy description. “Lemontown Riddles” gets us closer to the familiar burn of Laubrock’s sax playing, which erupts further on “Clown Car” with the reedist on soprano, displaying a broad timbre range.

Then, just as the audience thinks it knows what to expect, the title track, situated as the centerpiece of the album, boldly carries us in a new direction. First, it descends into an emotional repose, with gradually rising tension from both players augmented by Rainey’s return to meditative cymbal work. “Mission Wolf” is Rainey at his finest, pointing us along a percussive frontier of possibilities. “Painted Cave” and “Scoff-Scoff-Face” further explore these themes with Laubrock showing us her range of tones. “Summerland” then takes us to the ecstatic precipice we have been seeking, boiling down many of the ideas expressed throughout the album, now compressed and at a burning tempo! Finally, “Patio A” features Laubrock playing in short unvoiced key strokes that mingle with Rainey’s playing like a percussion duet.

The title of the album evokes an image of a vivid landscape that the musicians then explore through ten tracks. There is often an open minimalism that pervades the duo allowing them to make great use of small sounds in wide open spaces. Ultimately it is these sorts of contrasts that they establish that give the greatest poignancy to their combined sound.