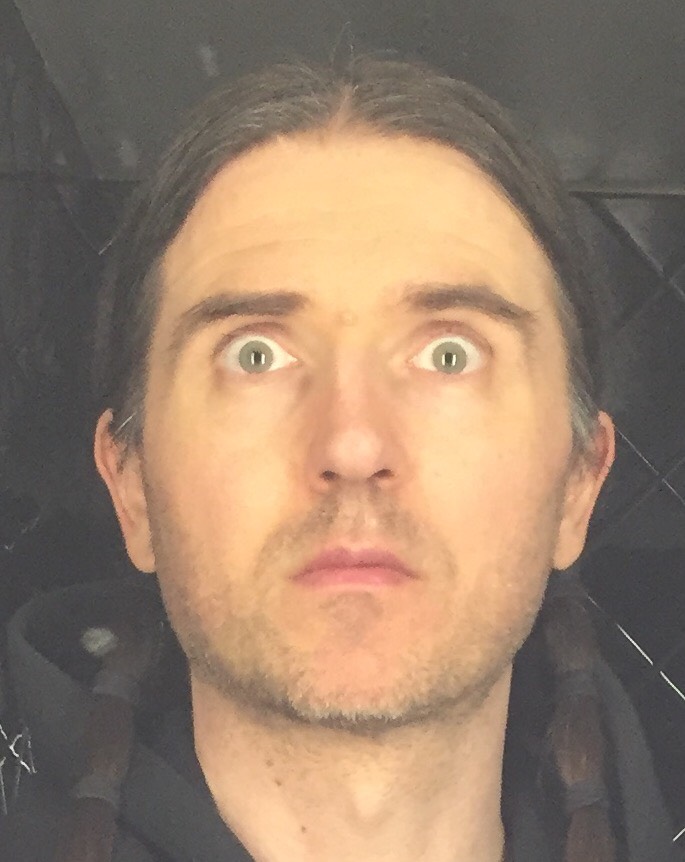 Chuck Bettis was raised in fertile harDCore soil, nourished within Baltimore’s enigmatic avant-garde gatherings, and is currently blossoming in New York’s downtown musical tribe. His unique blend of electronics and throat has led him into various collaborations. He has performed live with John Zorn, Fred Frith, Jamie Saft, and Afrirampo to name a few. Some of the musicians Bettis has recorded and played live with are as follows; Ikue Mori, Nautical Almanac, Audrey Chen, Yellow Swans, Toshio Kajiwara, Mick Barr, etc, plus a long history of punk bands he was in (most notably the experimental punk band Meta-matics as well as the enigmatic All Scars). Currently he is working on many of his experimental projects such as Snake Union with Dave Grant, Die Trommel Fatale with Brandon Seabrook/Marika Hughes/Eivind Opsvik/Henry Fraser/Dave Treut/Sam Ospovat, Mossenek with Mick Barr & Colin Marston, Chatterblip with Dafna Naphtali, and Pretty Clicks with Berangere Maximin, in addition to improvising, recording, or composing with an array of musicians from around the world.

Cisco Bradley: What music are you presenting as part of your residency at the Stone, April 25-30?

On Tuesday, April 25, there will be a rare public sighting of Overishins, a group put together by lightning fast guitarist Mick Barr which includes Johnny DeBlase on bass, Mike Pride on drums, & myself on throat & electronics. Our approach is very shamanistic but filtered through extremely heavy music. We just recorded our debut a few weeks ago and it should be available later this year.

On Wednesday, April 26, Die Trommel Fatale will perform, which is a septet created by madman guitarist Brandon Seabrook, consisting of Dave Treut & Sam Ospovat on drums, Eivind Opsvik & Henry Fraser on double basses, Marika Hughes on cello, & myself on throat & electronics. Brandon composed all the very technical tunes. Our record is coming out in June, hear a teaser here.

On Thursday, April 27 Snake Union, my duo with modular synthesist Dave Grant, decided to invite my old drummer friend Hisham Bharoocha (Kill Alters, Boredoms, ex-Black Dice) to collaborate with us. Snake Union compositions tend to be very rhythmic and Hisham is well versed in collaborating with electronics, so i am excited to see what we bring to life during our first ever collaboration. The new Snake Union release can be heard here.

The friday night, April 28 show, is with some old friends whom i have played in various groups over the years but never together in this particular line-up; Mick Barr (guitar), Evan Rapport (reeds), and Franke Vogl (prepared bass). Mick & I do Mossenek & Overishins, Evan & I have played in All Scars, Mudang Rouge, and various improv settings, Franke & I were teenagers when we first started playing together in the Meta-matics and now currently perform as a duo. Only one way to find out how this will sound.

Saturday, April 29 is a collaboration with the electro-acoustic duo Matmos. We debuted our collaboration during my previous Stone residency back in 2015. This beautiful couple brings forth tons of creativity and playfulness. I’m very excited that they were able come up from Baltimore to join me once again for some musical hi-jinks. Incidentally, they are the only out of towners I will be performing with this week.

On Sunday, April 30, to bring a close to my residency, will be my first time collaborating with the super-group Mephista. Although I have collaborated with Ikue Mori & Sylvie Courvoisier many times before (we did a trio during my last residency) this will be the first time with Susie Ibarra. What more can be said about Mephista, they rule! All three of them will push me to keep up with their pace and you will not want to miss it!

Overall I’m deeply honored to share the stage with all of these amazing musicians. It will be a very exciting week of music!

Cisco Bradley: How did you hone your abilities as a musician?

Chuck Bettis:  I am a self-taught musician. I got heavily into punk as a pre-teen, started going to shows at age 13, then shortly after started playing in bands, so from very early on formal training was never of any interest.  I always learn from the experience of playing with others. Initially I played guitar & bass but then gravitated to trumpet & vocals then eventually taking up electronics as one of my main instruments. I got into playing solo from filling up mix tapes, experimenting with electronics and diving deeper into uncharted territories … years later this led to me building my own software instrument whilst barely knowing how to use a computer. Now it is extremely rare that I perform solo in public yet I’m still learning while always listening to others.

Cisco Bradley: How have your years on the punk music scene come to shape your aesthetic as an artist?

Chuck Bettis: I grew up in the DC Hardcore scene, where passion and intensity reigned supreme alongside a hefty dose of left-leaning politics. This energy collided with the passion of all avant-garde musics in an old group of mine called Meta-matics, then would later be explored deeper with a group that followed called All Scars. This Eventually sonically obscured my roots more with music that sounds nothing like my upbringing yet is strongly rooted in the community self-reliance based ideology.

Cisco Bradley: Thank you. I look forward to your residency!