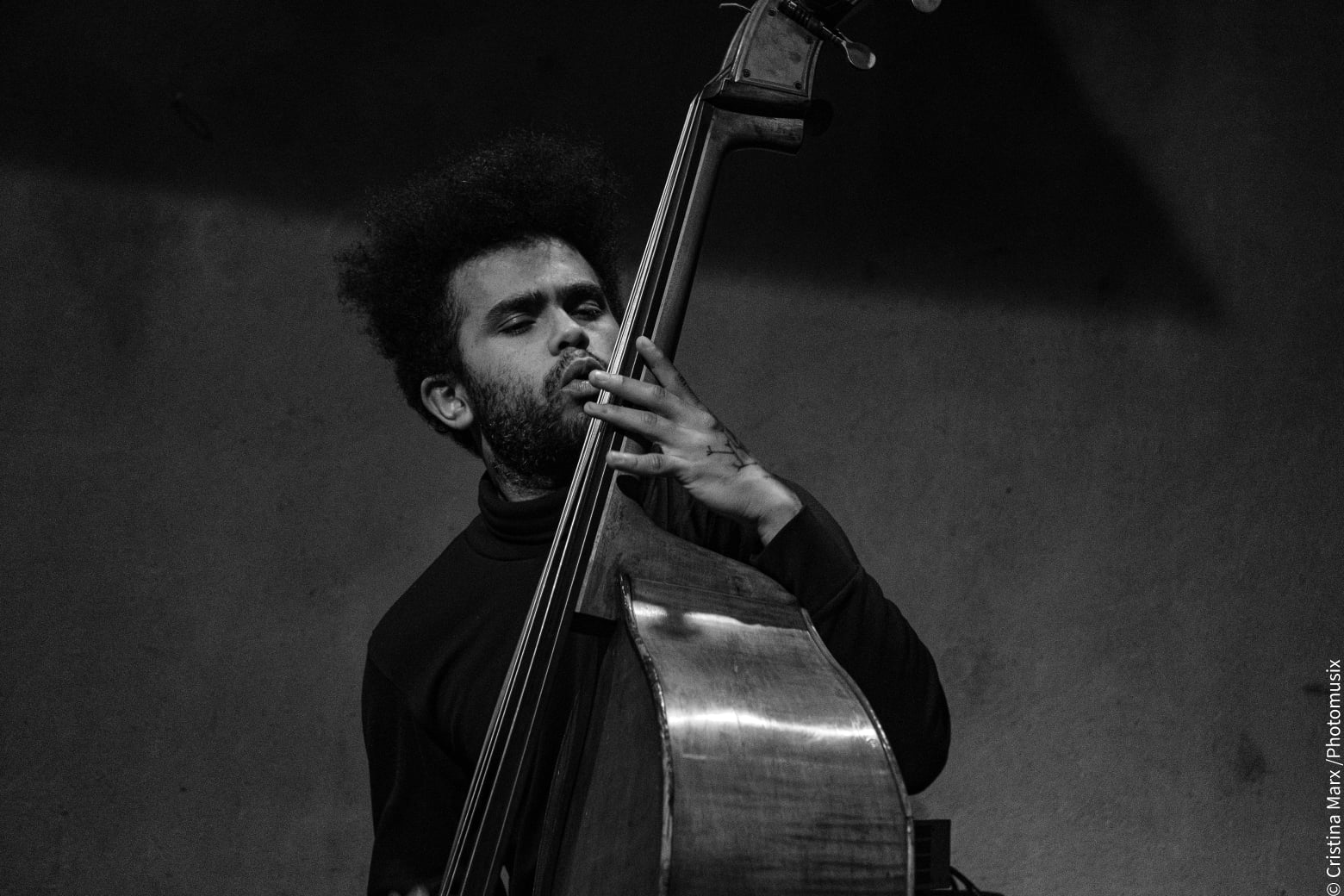 Over the past few months I had the opportunity to talk with bassist and composer Nick Dunston about his work. As one of a new generation of players on the New York scene (and beyond), he has had a confident, growing presence.

Cisco Bradley: What are your current projects?

Nick Dunston: A few things! Referring to my solo work, to start-I have a new solo project called “banjer”, which sits at the intersection of my prepared/extended banjo practice, my work with tape, and my work with audio transducers. “banjer” also exists alongside my bass playing in the context of a new group of mine that I formed here in Berlin, called “Skultura”. That band includes some really beautiful musicians-Cansu Tanrikulu on voice, Liz Kosack on synths, and Eldar Tsalikov on woodwinds. We have some gigs in Europe lined up for later this year. In addition to all of that, generally I’m expanding my work with found objects, electronics (mostly with a hardware emphasis), and instrument augmentation/development. My “New York band”, Atlantic Extraction, and my opera-in-progress, “La Operación”, are also ongoing! We are not done just yet with that work. I have plans to record all of these projects, but perhaps slightly too soon to announce just yet, so be on the lookout!

CB: What was your approach to making the music on your debut record as a leader, Atlantic Extraction? Can you talk about the ideas behind your compositions?

ND: Well that was really my first band, and I wanted to build something as from the ground up as possible (meaning, not just hiring a band that is already basically a preexisting band, which I feel happens a lot in NYC, which is strange, given how many wonderful musicians there are). With that group, I experimented with a lot of different compositional techniques, approaches to notation, and at that time I was particularly using compositional techniques that I picked up listening and studying Braxton, and through playing with Tyshawn. Atlantic Extraction (that’s also the name of the band) communicated often and deeply about the music, rehearsed all the time, played a bunch of gigs, and we even took a group lesson once with Joe Morris. So the music on the record is really just a midstream snapshot of us in this incredibly rigorous and passionate part of this period. I’m ridiculously lucky to be able to work with Louna Dekker-Vargas, Ledah Finck, Tal Yahalom, and Stephen Boegehold. In terms of the compositions, they were really all over the place. Each one sort of had it’s own thing going on. I will say that in each of them, orchestration was a particularly huge factor. Flute, violin, guitar, bass, and drums has so much potential and I wanted to stretch as many of those bounds as I could. Another thing that ended up on the record was actually pretty spontaneous. Taking from Braxton’s idea of collage structures, I did a few spontaneous ones with the band at the recording session. Something like “Okay, Stephen and Tal loop the 5th bar of Globular Weaving, Leah loop through the last line of Tattle Snake, and Louna and I will play through the melody of S.S. Nemesis. So basically extracting (hah get it) fragments of a variety of completely unrelated tunes and seeing what kind of textures can come out of looping them and layering them and distorting them in that way. It represents this janky, cyclical, sampling sound that I love so much, which is why I listed Maria Chavez as one of my influences in your earlier question.

CB: What led you to record Carrboro Improvisations earlier this year? Is solo a preferred format for you?

ND: Oh, that was part of the phase of the pandemic when live stream things were like, REALLY popular. A Belgian agency I sometimes work with asked me to record a few videos for a series they did. I liked what I played so I just threw it on a solo record on Bandcamp. I enjoy playing solo and I am especially excited to be building more of a rep with electronics and other instruments. That said, I do sometimes get burnt out from solo bass. I feel like I only really improve, at least consciously, in times of intense frustration. It feels like I’m plowing through this thought of “I literally can’t think of any other thing to play on the bass”. And then I improve. But the process can sometimes be as draining as it is exciting. In any case, I prefer playing with other musicians anyway. It’s nice to compose for others but to also leave breathing room for the fact that I don’t necessarily want to be the only arbiter of good taste. Music is great, but I’m much more interested in musicians. Though it’s worth noting that solo playing has impacted my group playing/concept of music in general. It’s taught me a lot about form, timing, and patience, and in terms of technique, it’s given me a lot of experience creating different timbrel combinations on the bass with each of my hands playing different parts of the instrument, usually in relatively unconventional ways.

CB: How is experimentation and improvisation a life practice for you?

ND: Sometimes I have a hard time leaving my comfort zone (I guess that’s what a comfort zone, by definition, is). That said, for me, experimentation and improvisation basically embody this notion that wherever you’re at in terms of your maturity/wisdom/general life experience is so precious and not at all a given. So it’s really taught me to constantly practice gratitude for all that I have, and patience as well. And oddly enough, that practice has helped me find fulfillment in so many other places outside of music.

CB: What drew you onto the path to becoming a musician?

ND: I started on the cello when I was 5. For about 10 years I drifted towards and away from music, playing in bands with friends and such, and gradually, the times that I was drifting towards it simply lasted longer. My interest in music as a profession really solidified when I started high school. I went to an arts high school, where we played so much music every day. So I got really lucky with those resources at that time. Our band director had tons of rare Ellington, Gil Evans, and Mingus charts, and I was also attending the Manhattan School of Music pre-college program. The whole thing was basically my “jazz steroids” moment. Starting in college was when I honed more closely in on my composing, free improvising, and interdisciplinary practice(s), and that’s when everything shot in a million directions, and I suppose I’m still in that phase right now.

CB: Is it possible to identify how you formed your sonic palette? What/who are your aesthetic influences?

ND: It’s a bit hard to say because the body of my work is kind of all over the place in terms of instrumentation and “aesthetic”. I would say that the more structural and philosophical influences; that is, influences in terms of methods, or how they approach their work-are more important than my aesthetic ones. I feel like any perceived aesthetic influences are more just me (or others) drawing conclusions, based on an inevitably biased analysis of my “sound”, rather than naming influences that I am potently aware of. So to (sort of) answer your question: some of these structural/philosophical influences include  The Art Ensemble of Chicago, Charles Mingus, Andrea Parkins, Anthony Braxton, Marc Ribot, Maria Chavez, Jen Shyu, Ches Smith, Butch Morris, Frank Zappa, Tyshawn Sorey, Pamela Z, John Zorn, and Betty Carter.

CB: Who are your bass heroes?

CB: What ten records have had the greatest impact on you?

CB: In 2020, you relocated to Berlin. Can you talk about that decision and what musical doors have opened for you there? Is Berlin a long-term base of operations for you?

ND: Moving to Berlin, especially at this time, is one of the scariest, and best things I’ve ever done for myself. The decision was ignited by the fact that my partner Cansu and I wanted to be (physically) together, and to devote a certain level of commitment towards each other; which for me also stems from the larger need to take a second and really think about what I need, in a sense that is much larger than just music. That impulse of taking a second, considering my true needs as a person, and taking care of myself is not something I felt I was able to do in NYC in a way that felt sustainable. Moving anywhere, especially during a pandemic is difficult (though I’m lucky to have such a supportive partner through that especially), but it’s so clear to me that this was the right move. It’s only clarified and reinforced what my priorities are, both inside and outside of music. Artistically, it’s been extremely fulfilling and exciting. The energy of the scene is different than NYC for sure, in some ways that I prefer, in others not. But as I expected, I’m finding that there is no shortage of brilliant musicians and artists to connect with. I’m experiencing, of course, only a small percentage of what I normally would without a pandemic, but pretty much immediately since I got here, I’ve been continuously blown away. I’m more excited thatn I ever have been for upcoming collaborations and experiences. Traveling and not being stuck in any one place all the time is super important to me, and it’s looking like later this year and going into 2022 there is a fair amount of back and forth between Europe and the U.S. for professional commitments. So yeah, Berlin makes a lot of sense as a long-term base, at least for the forseeable future. I’m fully legal, and am also investing a lot of time into learning German, which has been super tough, but honestly the fact that I can speak any amount at all is pretty mind blowing to me.