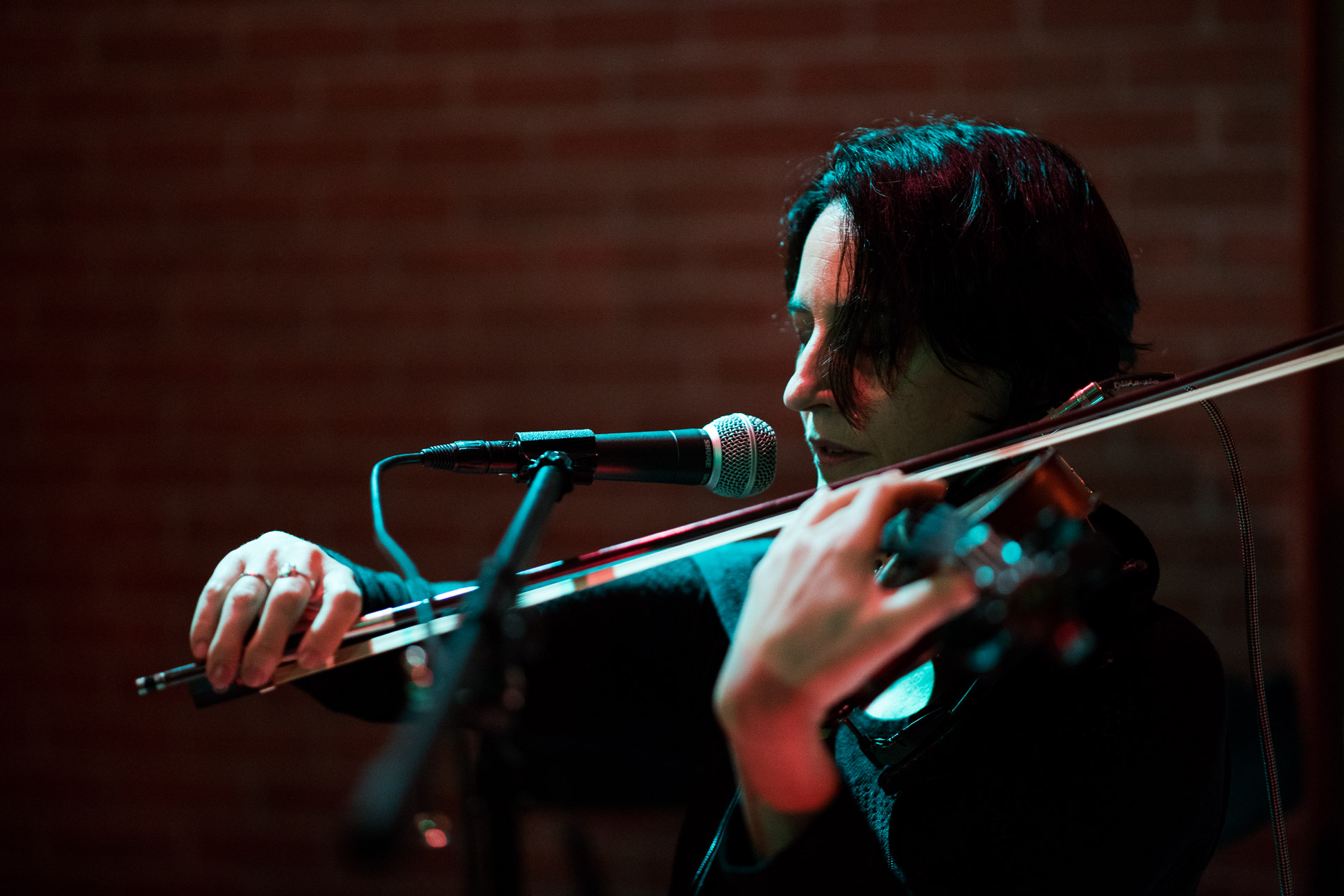 In January, I had the opportunity to ask Sarah Bernstein (violin, electronics, poetry, composer) about her new record, Crazy Lights Shining, released in 2018 on the Phase Frame Music label. Bernstein is a singular player on the New York scene, with more than two decades of work, numerous records, and a number of key projects that she has developed over the years.

Cisco Bradley: I thought your record Crazy Lights Shining was one of the best records of 2018, the second with your duo with Satoshi Takeishi. Can you talk about how you put that band together and the concepts that have driven the music? Did you have any inspirations for the instrumentation–violin-drum duo with your vocals?

Sarah Bernstein: Unearthish began as a solo project. I wanted a self-contained yet full expression, and so I brought everything I had on offer simultaneously: poetry, voice, violin, electronics. My early shows were a lot of trial and error, in terms of what was effective, and what fit together conceptually. I found myself wishing for another element in the material, and started to rethink the solo format. Eventually I had a chance to play with Satoshi Takeishi, and it was clear to me that his rhythmic and sonic approach would really elevate the work. The Unearthish pieces cover a wide range musically, from minimalist groove to angular melody to art-pop ballad. Satoshi’s artistic background is so varied, thoughtful, and masterful that he’s able to beautifully orchestrate my compositions with drums and occasional pitched percussion. We recorded our first album, Unearthish (2011) shortly after we began playing together, and that was also my first release as a leader. The recent album Crazy Lights Shining (2018) benefits from our longer collaboration, as well as more clarity in the pieces, and experience with recording.

The concepts that drive my music and words: they’re either personal, societal, or fantastical. I think my original impetus to create was often emotional, seeking catharsis. Now I’m more interested in practice and method, but still towards the same thing, uncovering of feeling or other truths. Making art is very fair. I create an album, someone chooses to listen to it or not. In the real world people seem driven to impose their issues on each other as much as possible. I think art is a less aggressive choice of what to do with self.

CB: Can you describe your creative process? Do you need to work to bring the words and music together or are they already united at the point of genesis? How do you work as a composer and improviser?

SB: I approach putting words and music together from any direction. Words first, music first, words and music simultaneously. Music to accompany a poem. Lyrics for an existing melody. I’m more likely to write a melodic line before the  harmony, but sometimes that’s reversed. I write intuitively, as the ear and mind pulls, or I create systems and manipulate patterns. I stick elements together and make them fit each other. That’s the composition side. Improvisation is another thing. It is more related to performance, the moment. My background as an improviser is widely spread out over “free”, “jazz”, “noise”, “pop”, “world”, “new music” and even “theater.” Right from the beginning I found myself
involved in almost all these areas simultaneously, which was mentally complicated, but also natural. 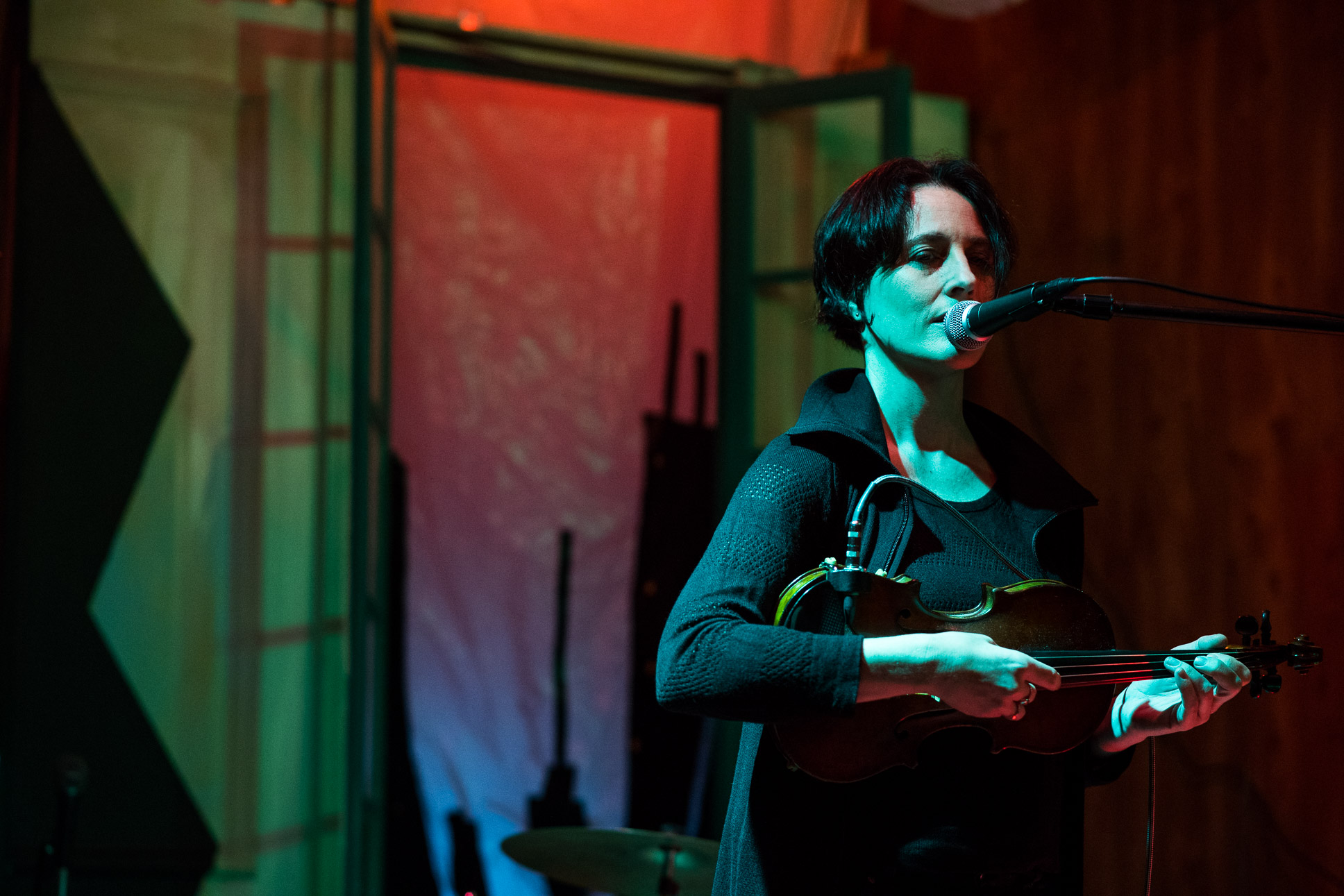 CB: What led you to New York?

SB: I moved to NYC from my hometown of San Francisco in 1996. A pretty common migration pattern that belies a basic coastal bias – I like being near an ocean. A little more unusual is that I’ve stayed. A lot of musicians and artists spend a chunk of time here and then move on. What still excites me about New York is the quantity of interesting artists and creative communities that intersect and overlap. I constantly meet new collaborators, and am provided with new artistic challenges at every turn. I can realize all my projects here, and dream up new ones, due to the quality and variety of the people around me. So it is very fulfilling in that sense to be in New York.

CB: Who have been your primary collaborators in New York?

SB: I’ve worked with Satoshi Takeishi for a long while with the Unearthish duo, as we’ve talked about. We play in other settings too, including most recently with my jazz quartet. I also have a noise/improv duo with drummer Kid Millions (John Colpitts). We just recorded our third album, to be released later this year on 577 Records. I’ve performed and recorded with John’s project Man Forever as well. Another great musician who I play with a lot is trumpeter/composer Dave Scott. His band that I’m in just released an album this month on Steeplechase. My most frequent collaborator is my husband bassist/keyboardist Stuart Popejoy. We’ve played together since our late teens in the Bay Area. After a
decade break, we started back up in New York with a group called Iron Dog, a duo that became a trio with Andrew Drury. Now we have a new project, Day So Far, a synth-pop band with Danny Tunick on drums. We also play in each others’ bands, as well as sidepersons on the same gig. I’m also very excited about some new collaborations. I’m in projects led by Tomeka Reid, Pamelia Stickney, Shelley Hirsch, and Anders Nilsson/Hampus Öhman-Frölund. I’m playing with great string players Sana Nagano, Leonor Falcón, Nick Jozwiak. And I’m part of a new collaborative group with Ava Mendoza, Vijay Anderson, Adam Lane. To name a few.

CB: Who/what are your main influences as an artist?

SB: I don’t think too much about influences at this point. I tend to adhere to a kill-your-idols mentality. It’s fun for me though when people compare my work to others, because it usually ends up being a way for me to discover new artists. But to provide some context – all the elements that I currently use in my work I began exploring decades ago as a kid in San Francisco, where the underground scene was thriving. Punk venues, book stores, movie theaters, political rallies, that’s where I would go to be inspired, plus the beach and the mountains. I also played at that time with free improvisers, rock bands, incorporated poetry into performance, put together jazz groups, and did a lot of composing. Music school was also part of my journey, in San Francisco, Los Angeles, and New York. Playing violin is itself an  influence, especially the repertoire, which still interests me. Ultimately I believe we’re all autodidacts.