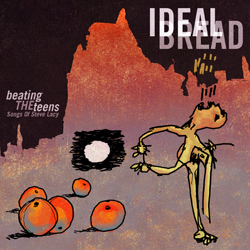 Beating the Teens, the third record by Josh Sinton’s band Ideal Bread, is a stunning accomplishment. Sinton shows yet again that he has a deep understanding of the music of Steve Lacy–Ideal Bread exclusively plays the music of the late soprano saxophonist–while re-inhabiting these pieces with all manner of new ideas. The recording has caught these four talented musicians at the top of their game. This dual CD no doubt makes a strong case for inclusion on any “best of” lists for creative music in 2014.

The 30 tracks Sinton has assembled here are rearrangements of the box set Scratching the 70s/Dreams which in turn was a compilation of the five LPs Lapis, The Owl, Roba, Dreams, and Scraps. For the Beating the Teens record, Sintons notes, “I went back to [Lacy’s] laboratory years when he was still trying to figure out the precise kind of alchemy he would be practicing. There’s a lot of unfinished sounds, unfinished thoughts in the source material and that incorporeality gave us a lot more space to be ourselves.”

Ideal Bread is often referred to as a repertory band and in one sense, it is, but Sinton has also gone to great lengths to open this music up and allow each musician to really grow within the pieces. This record in particular, marks a new phase for the band. Sinton described the new direction, “Sometimes it’s fine for us to play songs in a composition-improvisation-composition format (this was Lacy’s preference over 90% of the time), but I didn’t see a reason for us to keep playing music that way every time we played. That was an approach that worked really well for Lacy, but it wasn’t making sense for us 100% of the time.” The process for rearranging the songs began with Sinton investing many hundreds of hours in 2012, working on the arrangements. As Sinton explained it the opening of what was to be an exquisite performance at Cornelia Street Cafe, November 20, 2013, “this music came out of Lacy’s brain, went into my brain, and then back out again.” Sinton injects plenty of vitality into the way he realizes these pieces and tailors them for his three band mates in ways that allow them to personalize the songs even further.

The musicianship on Beating the Teens is superb. While many recordings today are done after just a handful of public performances (and sometimes only one!), Ideal Bread performed regularly over the preceding year as Sinton’s perfectionism compelled him to hone in on even the most minute details to make sure the sound they were producing was the one he intended. Sinton and cornetist Kirk Knuffke focus on intertwining dissonances throughout the record, delivering crisp, focused tones. The intrepid Fujiwara embraces the very difficult drum parts with a spirit for adventure, adding both precision and flare to the rhythms. Most surprisingly, this record may well represent the breaking out party for bassist Adam Hopkins, who to this point seems not to have gotten much exposure outside of the Brooklyn scene. Hopkins anchors this quartet while displaying a versatility of styles, moods, and creative interactions with the other players.

Both CDs are book-ended by different takes of “Three Pieces from Tao” which really drive home the essence of what Sinton’s intention is with this record. Reminiscent of records that begin and end with a theme, the leader has framed the record here not with some deep, underlying melody or rhythm, but rather with abstract tidbits that introduce us to this bold new interpretation of Lacy. Then, as we end each CD, we are again reminded of the liminal space in which these performers have rooted their sonic geography.

The opening sections of CD #1 oscillate between abstract and more grounded arrangements. “Wish” and “Lesson,” for example, offer us direct movement forward and moments of coalescence, in contrast to the preceding “Precipitation Suite.” In “Scraps” the horns really dive into their exploration of pleasant dissonance over steady beats that we see emerge again at numerous other points on the record. On “The Wane,” one of the masterpieces of the album, we see the intertwining horns begin to really build startling architecture–bass and drums drive the piece along while horns climb over the top, molding it into shape. “Dreams” features Knuffke with some very difficult abstract playing over beautifully bowed bass. “Somebody Special” gives Sinton some of his greatest exposure with a long, tightly performed solo with very light accents from breathy cornet and brushed drums. “Name” is a nice mellow turn towards the conclusion of the first CD.

On the second CD, “The Owl” is a purely fun tune, but then gives way to the more somber “Spell,” which conjures unseen forces that push the piece along with deep tsunamic foreboding. “Crops” then shifts moods before “Pearl Street” features Knuffke on wavering, emotionally vulnerable cornet lines. “Blinks” features Fujiwara on a brilliant, patient solo. “The Uh Uh Uh” is a work of rare alchemy, blending Sinton’s direct burning tone with the searing energy of cornet and rhythms, forming one of the most cohesive pieces on the album. “Torments” gives Hopkins time to shine. In “The Oil” we get some of the most beautiful doses of dissonance, before concluding with the fun and lightly humorous “Roba.”

Sinton, Knuffke, Hopkins, and Fujiwara are part of an exciting and cutting-edge music scene based in Brooklyn, NY. For those who have seen this band perform live and want these moments captured in flawless form, this CD is the answer. For fans of creative music, adventurous jazz, and new music beyond New York, savor the music on this record . . . and then see what you can do to get Ideal Bread to perform in your local music hall, club, cafe, or student union. These guys are on fire!