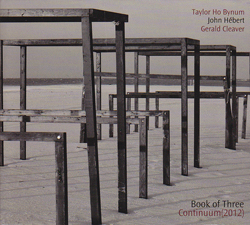 The much-awaited second release by Book of Three, a collaborative trio, witnesses the band opening a fertile frontier of music explored through four original compositions and three carefully-selected pieces by other artists. The album paints a brilliant tapestry of minimalist music that is deeply emotional and personal, yet readily accessible. Through the course of seven tracks, the musicians explore myriad aspects of memory: mourning and solemnity, distance and longing, emptiness and reunion. This is a brilliant follow-up to their self-titled 2010 release on Rogue Art.

The mood of the album is evident from the opening notes with Hebert’s bass lines revolving like a wheel around which Ho Bynum and Cleaver add crisp and direct dashes of color. There is a sparseness in this piece and throughout the album that makes references to a wide range of figures from Miles Davis to Bill Dixon, while maintaining a forward-looking, fresh character. The second piece, written by Ho Bynum’s friend and collaborator Jim Hobbs, opens with bowed bass with growing tension added by Cleaver over which Ho Bynum offers a few bursts before mellowing into a muted, relaxed sound. The song projects a feeling of emptiness and is one of the most successful on the album due to Ho Bynum’s subtle brilliance. At times the resonance of his horn melds with Cleaver’s cymbals, while at other moments the bristling vibrations he produces mingle in harmony with Hebert’s lines.

The third piece, composed by Cleaver, opens with flutters on the drums and cymbals that stir up the feel of the album intermixing with Hebert in complex fashion. Meanwhile, Ho Bynum balances out the music with his confident, relaxed voice that suggests a we-will-get-there-together type of fellowship. The fourth track, “Open City,” is a magnificent display of subtlety. It opens with a spare, soaring solo by Ho Bynum over Cleaver’s occasional prodding of the drums. Then the music melds into a rumbling drum line with short bursts from Hebert and more extended ascents by Ho Bynum before receding into oblivion.

“Jamila” is this album’s ace in the sleeve. It opens with warm resonances of muted trumpet over robust bass lines and skittering percussion which even swing. The song picks up speed, slows down, accelerates again, and so forth in a way that suggests that nothing is as it appears: order in disorder, constancy in change, renewal in passing.

“Journal Square Compilations” is a stunning work. Ho Bynum produces soaring tones that start as minute points and grow to their full potential in the span of a second. The relation of the individual to the multitude, past and present, ideas of which were present throughout the album, become fully realized here to great effect. The piece has an aqueous quality like a pristine pool of water upon which a solitary droplet falls producing outward-moving waves. Then more droplets of sound fall, creating all manner of shimmering harmonies which, while interacting, present a unity in their shifting patterns even as they collide. These build towards the apex of the piece from which point they are released into memory.

The closing track, returns to some of the earlier ideas of the album, but are here displayed in new ways. The piece has a metallic, elastic feel to it as if a song that might have otherwise been confined to a few compressed minutes, has been given ample room to grow without interference. Hebert’s solo–his greatest exposure on the set–is a crowning achievement.

Each song is presented as a chapter in this exploratory venture and each contributes towards building a greater whole–the mood of the album is cohesive, deep, and varied. One hesitates to use the term “masterpiece” in our day and age especially in reference to a genre of music so often overshadowed by the great ghosts of the past. But it may suffice to say that when future histories of jazz and creative music are written, when we have a wiser perspective only gleaned by time, this album will surely stand out as a monumental statement by three of most talented and imaginative musicians currently playing.