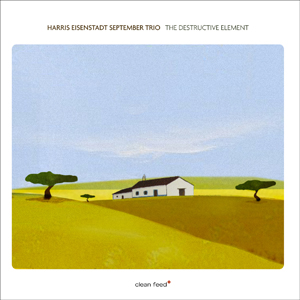 Review: We are spoiled to have yet another interesting, sophisticated, and thoughtful album by one of the new generation’s most adept composers, Harris Eisenstadt. The Destructive Element, September Trio’s second release, is an interesting foray for the drummer into compositional depth, melody and harmony, and plays on tempo and rhythm. This album has a very cohesive feel to it with a mood that, while broad in its scope, is consistent from beginning to end. This is Eisenstadt’s most melodic release to date, though such a comment should not be read as unchallenging or smooth, but rather beneath the warmth and richness of the sounds contained within, this album possesses a complex underpinning of new ideas.

The album starts from a point of abstraction–a diffuse drum introduction from which the melody of piano eventually emerges, suggesting that we are on a long journey and that this album is just one vibrant part of the longer voyage. “Swimming, then Rained Out” even swings a bit as it offers us welcome. “Additives” is one of the more interesting pieces in terms of rhythm and possesses a disunity that seems to challenge simplistic cohesion. The album features Sanchez leading the melodic line with Eskelin echoing, while beneath and within their sound Eisenstadt plays with tempo–speeding up and slowing down at times to give the piece an urgent feel, like we are catching up with some received wisdom from the traveler who we have encountered along our way.

The third and eighth tracks, explicit references to Arnold Schoenberg (1874-1951), offer us a glimpse of one of Eisenstadt’s influences–and the pieces possess a pensive, searching quality while the drummer forms his flurry of beats around the more resolute notes played by the pianist and saxophonist. It is an interesting experiment in interplay–a quality for which Eisenstadt has gained a reputation–and together are among the most successful pieces in this vein on the album.

At the center of the album are “Back and Forth” and “Ordinary Weirdness”, two ballads that give the album a balanced, solid core upon which the earlier and later pieces seem to adhere. The second of these deepens and even darkens the mood with dashes of uncertainty.

The sixth track, the album’s title piece, is the shortest song on the album, but is no less consequential. After all, the song has a very concise and conclusive feel to it–the composer has managed to boil his thoughts down here to a rich, profound statement that is emotionally riveting. Like other songs he has written, Eisenstadt has referenced literature here, namely Joseph Conrad’s Lord Jim. The album itself quotes the following passage:

A man that is born falls into the sea like a man who falls into a dream. And because you not always can keep your eyes shut, there comes the real trouble, the heart pain, the world pain. I tell you my friend, it is not good to find that you cannot make your dreams come true, for the simple reason that you not strong enough are, or clever enough. And yet it is true, it is true, in the destructive element immerse. That was the way to follow the dream and again to follow the dream.

“Cascadia” is an ode to a fictional place, or rather, a nation of Eisenstadt’s imagination that would comprise “British Columbia, Washington, Oregon, and maybe Montana.” This dedication to the Pacific northwest is visually stimulating in its imaginative power–the music illustrates the mountains and plateaus, brilliant waterfalls, steep drops, ascents and descents, the incessant rains. Appealing to our senses and our imagination simultaneously, this piece expands our sense of the possible–at once so tangible and located, while at the same time improbable. The closing track, a tribute to Japanese film, conjures up the image of samurai advancing on a hapless dwelling or town, escalating to brilliant leaps, swords unsheathed, and fights between opposing forces–a fun, energetic conclusion to the album.

This is a new turn in Eisenstadt’s corpus and one that should help to extend his audience. The melodic elements were even stronger in their release concert at Cornelia Street Café on June 20. To obtain a copy of the album, purchase one from the musicians themselves, order it from your local record store, or online from the Jazz Loft.