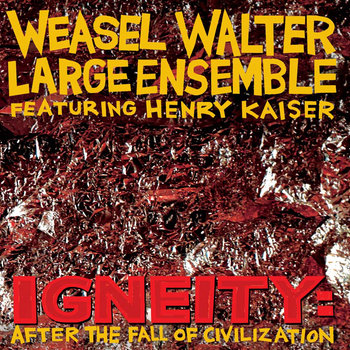 Percussionist, guitarist and improvising composer Weasel Walter has been a crucial part of the New York creative music scene for the better part of the last eight years since planting roots here in 2009 and following lengthy stints in the Bay Area and Chicago. He’s part of a generation of musicians who, trawling the cut-out bins in better record stores in the 1980s and 1990s, did not see much difference between the avant-garde in free music, punk, oddball rock and modern composition. Forming his identity as a musician-composer in the Flying Luttenbachers, post-Albert Ayler saxophone squall met with jittery No Wave song structures and, eventually, hybridized progressive rock and metal. While currently active primarily as a guitarist in Cellular Chaos (with vocalist Admiral Grey and bassist Shayna Dulberger) and No Wave/post-punk icon Lydia Lunch’s Retrovirus (with electric bassist Tim Dahl and drummer Bob Bert), Walter has maintained a taut connection to a bevy of improvisers from different generations as heard on two recent releases of small group and large ensemble music.

Weasel Walter Large Ensemble – Igneity: After the Fall of Civilization

Igneity, self-released but sharing graphic commonality with discs on Walter’s dearly-departed ugEXPLODE label, is the ninth orchestral work that the composer has assembled (including a couple of MIDI-arranged one-man-orchestras). Here, he’s joined by saxophonists Jim Sauter, Michael Foster, Chris Pitsiokos and Matt Nelson, trumpeter Peter Evans, tubist Dan Peck, trombonist Steve Swell, guitarists Henry Kaiser, Alan Licht and Chris Welcome, and Brandon Lopez and Tim Dahl on contrabasses, while Walter rushes between drums and conducting this graphically-scored hour-long behemoth. While there are numerous spots in which individuals stretch out in solo and small formations – masses of guitar squall; hoarse tenor overblowing pummeled BaBi-like by Walter’s furious kit detail; nattering brass heaves amid high-pitched glossolalia – Igneity is an ensemble work of great extremes. Power, density, and contrast are all tools at Walter’s disposal and he uses them expertly, sculpting duet introspection with as much rigor and emotional clarity as he does a passage of coagulated ferocity. It’s somewhat of a coup getting Kaiser and Licht together in a warped large ensemble setting, considering how gorgeous their duos at the Stone were in February 2015 (about three months before Igneity was recorded), and both guitarists are in particularly fine form, blending pedal-actuated skitter with stomach-knotting low, bluesy wails throughout. Though likely precluded by the economic and practical realities of rehearsing, recording and performing with a large group, Walter has convened this ensemble in two variants a couple of times in the last year at Brooklyn’s JACK, and it will be interesting to see if this variably-scaled work can continue, as there’s certainly room for more.

Plane Crash Two is the follow-up to the 2009 ugEXPLODE release of Plane Crash, featuring the guitar-focused trio of Kaiser, Walter and bassist Damon Smith. The sequel was recorded the same day as English guitarist Ray Russell’s The Celestial Squid (Cuneiform, 2015), which was arranged in part by Kaiser and also featured Walter and Smith. All three players are well-versed in Continental European, English and Japanese free music as well as a wide range of American improvisation; starting the proceedings on acoustic guitar, Kaiser’s playing echoes Masayuki Takayanagi, Derek Bailey and Takoma school AFM. After a dry passage of rhythmic tug, Kaiser reemerges plugged-in with a thin, grubby twang of torqued country rock, stretched out and inverted via an array of pedals, while Smith’s gritty arco kneading presents a meaty foil. Despite the sparse instrumentation, the threesome are able to create a pretty massive brew — Kaiser often uses loops to continue phrases as a ghostly orchestra behind and around newly-evolved statements — and Walter’s skimming, concentrated and decidedly un-resonant approach to the kit often sounds like he has duplicated himself. That said, even in the densest passages (“Violent is the Word for Curly” particularly gets down to business) the music is balanced and crisply rendered. There’s a funny opposition between the drummer and guitarist, pitting action that’s just shy of anarchic tipping points against the richly distressed circularity of Kaiser’s phrasing, which Smith’s rumbling blocks shade and referee. Kaiser, Smith and Walter create some of the most consistently engaging guitar-based contemporary improvisation, and their shared language has only become clearer over time.