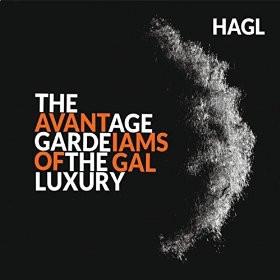 Heroes Are Gang Leaders (HAGL) is a New York based ensemble that was formed in the wake of the death of famed Poet Amiri Baraka (HAGL’s name is even swiped from a Baraka piece). The ensemble fuses elements of jazz and the great traditions of Black Poetry with aspects of Free/Avant-Garde music while pulling influences from No Wave and Experimental improvisation. Combining references to the past with a youthful sense of snark and rebellious energy, the band’s two newly released records The Avant Age Garde I Ams The Gal Luxury and Highest Engines Near/Near Higher Engineers arrive in a time in which Afro-Futurism and the jazz-infused Hip Hop of Kendrick Lamar are reshaping aesthetic and political complexion of mainstream Black Art and culture. On both of these records, HAGL provide equally impressive examples of future directions that the music can take,  directions that are similar (or at least related) to the groundwork currently being laid in the Afro-Futurism, Hip Hop and the new improvisational music.

The Avant Age Garde I Ams The Gal Luxury was recorded over the course of a two-day period in the summer of 2015 as a tribute to pioneering Beat Poet Bob Kaufman The line up for this project includes: Thomas Sayers Ellis, James Brandon Lewis, Margaret Morris, Ryan T. Frazier, Randall Horton and Luke Stewart, The Avant Agealso features guest performances by former Sonic Youth guitarist Thurston Moore; Devin Brahja Waldman (drums) and No Wave vocalist Lydia Lunch. This set opens with the title track, a joyous and lightly swinging piece with two intersecting lines of smoothly sung and spoken vocals. “The Production of Study (Mental Instru)” fuses an abstract Hip Hop referencing groove that feels like a rhythmically looser envisioning of DJ Premier’s classic productions with the group Gangstarr with furious and free trumpet lines jutting in and out of the rhythmic and harmonic framework. Another standout piece is the deeply melodic “Dem Damn Beatitudes.” A sweet and lonely Blues meditation with dynamic tenor sax lines that straddle the line between free and traditional playing. “Slow Limos and Meteorites” opens with a slowly unwinding bass line, blossoming into a richly macabre funeral march full delicate, ping-ponging electric guitars, sax and vocals, only to gently fade away shortly after reaching its climax. The sound throughout the entire project is loose and expansive and it is thematically diverse yet aesthetically consistent with its constant allusions to historical figures and moments. Even in the moments, just as HAGL’s quirk and loose composition style might wear on a listener, a new idea presents itself, opening a new and exciting avenue of musical possibilities.

Highest Engines Near/Near Higher Engineers is a shorter work inspired by and dedicated to lauded Black poet Gwendolyn Brooks. The set starts off with “Vintage Music For The Future,” a track that could be taken as a declarative theme for HAGL itself. Throughout Highest Engines Near, the HAGL ensemble mines the history of progressive Black art, music and literary movements, fusing it all with contemporary swagger. Surprisingly, the twenty-one minute epic “WeWeWeWe The Remarkable” stands out as one of the catchiest tunes in the HAGL songbook. With a lowslung, swinging rhythm section and an infectious vocal refrain “WeWe…..” grooves along hypnotically, sweeping the listener up into the powerful embrace of a communal, ancestral jam. At around the eleven-minute mark, the tune transitions into its bouncier, raucous second section. Full of potent, juke joint energy “WeWe…”’s second section gives way to a reprise of the opening section. This time, the rhythms, chants and brass lines are more subdued, almost sleepily relaxed and chilled out, building in intensity until a choir of voices swoops in, enveloping the entire piece.

Both The Avant Age Garde I Ams of the Gal Luxury and Highest Engines Near/Near Higher Engineers are delightfully loose and experimental song sets that are still heavy with substance and creative ideas. Both albums serve as promising introduction to such a young and ever-changing ensemble. Deftly swinging between the great traditions of progressive Black art and a newer, highly futuristic aesthetic, HAGL transcends the boundaries of contemporary music by incorporating the voices of both the modern and the ancient.

The Avant Age Garde I Ams of the Gal Luxury

Highest Engines Near / Near Higher Engineers