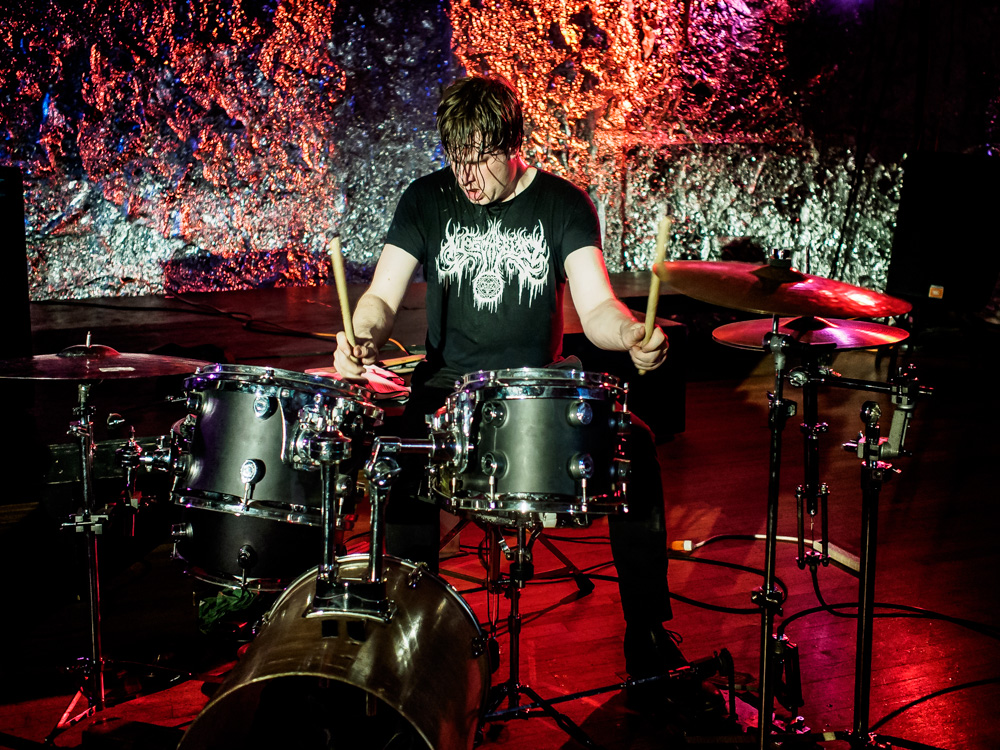 Weasel Walter is a Brooklyn-based multi-instrumentalist, composer and improviser best known for leading the seminal punk-jazz/no-wave/brutal-prog band The Flying Luttenbachers between 1991 and 2007 on 16 full-length releases. Seamlessly uniting the intensity and abstraction of improvised music with the nihilist aesthetics of extreme rock forms, Walter is committed to violent momentum, idiomatic unpredictability and rapid articulation. During the 1990s, Walter was a catalyst in the Chicago music underground playing with improvised music luminaries such as Kevin Drumm, Ken Vandermark and Jim O’Rourke as well as many experimental rock bands centered around the Skin Graft record label such as the Flying Luttenbachers, Lake Of Dracula, and Bobby Conn.

Residing in New York City since 2009, Walter has performed with Elliott Sharp, Thurston Moore, Darius Jones, Ava Mendoza, Alex Ward, Steve Swell, John Blum, Steve Beresford, Mick Barr and many more, in addition to co-leading bands like Cellular Chaos and Behold The Arctopus. The Flying Luttenbachers has reformed in 2017 and Walter tours internationally as the guitar player of Lydia Lunch Retrovirus since 2012. He appears on over 160 commercially released recordings.

Cisco Bradley: What do you intend to do with the next iteration of the Weasel Walter Large Ensemble?

Weasel Walter: Right now, I’m just trying to see how it flies under different circumstances, with better promotion and slightly different instrumentation and personnel. The main piece, “Igneity” can sound totally different every time, so I don’t think anybody will be bothered by that. This will be the fourth time some of these musicians have played it, so maybe they will bring certain experience to it which will make the performance better. I’m still tweaking the instrumentation and stage layout, so it’s productive for me to do the piece again. There’s always new challenges. No laurels to rest on. Nobody is sleepwalking through this thing. It’s kind of impossible.

CB: What musical concepts or aesthetics are present in your latest charts?

WW: At the last two gigs, I would spend entire days before it, frantically copying new charts and basically I would have to pack it in and give up a few hours before having to split to make the gig. Ha ha ha. I have two “almost finished” long form compositions that will be performed some day. One is a concerto for saxophonist Chris Pitsiokos, where the ensemble ambushes him in different ways and he has to react. I’m sure he will do great with it. The other is in the tradition of John Coltrane’s Ascension, sort of a regulated stream of solos. It’s a simple concept, but I’m trying to tighten it up and push it forward a little.

CB: How has the personnel changed from the earlier versions and what does the current lineup make possible?

WW: The lineup changes have partially to do with people’s availability, and the crunching of data in my head about the balance of the band. Two guitars is just too much. Ha ha ha. So, I eliminated one of the guitar chairs and made it a second trombone instead, which will be performed by Tyshawn Sorey. Four saxes was a bit overpowering as well, so I swapped a sax for a second trumpet. Tuba got lost in the arrangement, so I replaced it with amplified cello. It’s a good balance now: 4 strings, 3 reeds, 4 brass, one drummer. I look forward to seeing how it turns out.

CB: Where do you see the Large Ensemble going from here?

WW: The beauty of “Igneity” is that it is so modular, you could perform it in any permutation of 12 pieces, i.e. 2 X 12, 4 X 12, 100 X 12. As long as everybody sees the clock, it will be tight and crazy. Doing it with multiple ensembles simultaneously is a goal of mine. It would be quite an event.

CB: Do you have another Large Ensemble record planned?

WW: Not at the moment. However, the “Igneity” form is so flexible, I have condensed it to a 30 minute score for 5 musicians and I can perform that more often, as a matter of practicality. I’m really interested in seeing how many different results I can get from this elegant little structure.

CB: How did the Weasel Walter Large Ensemble originally come together?

WW: I’ve done large groups sporadically through the decades. I found it easier to pull off on the West Coast than I did in Chicago because I had such a great pool of players. I did some there and documented them. When I came to Brooklyn it wasn’t really in the forefront of my thinking because the setting wasn’t really all that receptive to it. Although there are a lot of talented players, it felt like there wasn’t really a venue for it. So it was synesthesia: in 2015, or whenever we did the first one, Henry Kaiser was going to be in town doing some stuff and he said, “I want to do a big band.” I responded, “Okay, Henry, fine. I’ll put together a big band for you.”

CB: What’s your approach to creating music for a big band?

WW: During the decades I had struggled with how to have a successful big band because usually rehearsals are at an absolute premium, and the more you write, the more shitty the execution usually is. It sounds like garbage because everyone’s on a different page and you’re trying to play stuff you haven’t rehearsed.

I finally devised a system that was so efficient that it actually didn’t even need to be rehearsed. I’m not going to give away the methodology but I found that finally, after decades, I figured out a system where it can really just be [making sound] super tight – all momentum, no boring parts, you know, like everything from solos to the group work. I figured out a way to do it.  I literally just plopped these scores down in front of everybody and they just nailed it, killed it.

I wanted to keep the real hell-raising aspect of classic free jazz, this sort of “Machine Gun”/”Ascension”/”European Echoes” kind of things that I like, but I also felt the format could be done better.  I think I succeeded at it.  I had these great players and I found out a way to make a better form. There’s no bullshit, no lag. We play it once, take a break,  play again and no one even knew it was the same piece.  It’s fresh every time.

I got inspired by it, and JACK (Brooklyn) was really open to the possibility. The turnout was good enough, so they felt like it was worth investing in. We did it at JACK three times in 2015-2016 with slightly different personnel, like Elliott Sharp and Brandon Seabrook as lead soloists. You know, we could plug new people into it all day basically.

At the same time, this music is not very fashionable in New York. I think a lot of free jazz big bands tend to be a little long in the tooth and a little boring so I really wanted to avoid that. It took a lot of work behind the scenes. When I showed up with that score, that was days and days of labor in calculations, to take away the unnecessary factors. The musicians don’t have to think about anything other than, “Play when you’re supposed to play, stop when you’re supposed to stop, and if you fuck up it’s fine”.  I finally figured out the best way to do it.

So, in a sense, finding that form was the culmination of thinking about it for 25 years.  At the same time, since there’s not a big market for it here, if I do it again soon it has to be under different circumstances because I lost money on it every single time. I’m a poor person so I can’t really afford to do that, but I felt like it was important to do and I will do it again, but I’m rethinking it and retooling it. At many points in my career where I’m doing all this crazy stuff, it’s so detailed, but nobody cares. Sometimes I can’t sustain it because I feel like it’s such a brick wall I’m up against. I don’t feel hopeless about something like the big band, for example, I just feel like I have to retool it a little.  I have to write some new stuff. I have to maybe find a different venue, a different setting, and I think that can be done.

CB: How do you make this kind of music happen in New York, despite the challenges?

WW: My attitude is to maintain a certain quality of music-making and art-making. Document it well and make it happen. Nobody stood around and watched Picasso paint his paintings. Why is that important? The painting is the important thing. My attitude has become a little bit zen in this regard. I’m not going to sweat the size of the audience. I’m just going to do what I do with the best people, with integrity, and document it.

I’ve always done everything myself, which can get a little tiring. I mix, master, package, release, organize … Right now, I’m not so good at booking gigs but I’m good at other things. I’m still pretty good at playing the drums when I actually get around to doing it.

Right now my bread and butter is playing in Europe with Lydia Lunch – 70-minute long epic rock guitar sets – just because that’s where the action is. I knew early on that what I was doing was not necessarily going to be this well-received thing, so I always had to be flexible and go where the love is or the energy is. You know, if I’m playing with a rock band, it’s one thing. If I’m playing free jazz, it’s another thing. I’ve gotten better at shifting gears when things are just not working and I’m banging my head against the wall. I try not to take it so personally  and just do something else for a while. I have a lot of ideas but I have limited resources and time. Getting older, I have to deal with a lot of things. I’ll always have the ideas but it matters whether or not I can get over the constant humps and just do it.